I am 33 years old, and I have never heard a godly man tell me he loves me.

Like many little girls, I used to dream of the heroic prince who would storm castle walls and valiantly risk certain death to prove his love for me. But like far too many others, my dream ended up being more of a nightmare. The only man who ever said he loved me during my childhood was actually a pedophile who exploited my vulnerability for his own sick purposes. By the time I was grown, I had learned to fight my own battles and slay my own dragons, the most vicious of these monsters being my need to be loved.

The love I had known was a lie. And it was killing me.

In the absence of any tangible sense of value, I drew what felt like the only reasonable conclusion: I was worthless. I spent the next 10 years of my life making heinous choices that perpetuated this lie, until my physical reality matched the condition of my heart.

There’s a term we often use to describe this type of destructive downward spiral. It’s called an identity crisis. And it’s at the root of a whole slew of today’s prevailing issues. From the transgender agenda to racial division to sexual trauma, identity crisis is the tie that binds so many of us together in our sin and shame.

I wish I could tell you that my story is unique, but it’s not. Studies indicate that sexual abuse survivors represent one out of every five females.

So when my boss at our local YMCA asked me to draft talking points to sell a new policy that would effectively open our organization’s numerous locker rooms and bathrooms on the basis of gender identity rather than biological sex, it was these girls that I thought of first.

I thought of the innocent little ones getting ready for swimming class who might find themselves exposed to a predatory male. I thought of the girls who had already been violated and had worked so hard to reclaim their personal boundaries—and how damaging it would be for them to know that, at any moment, a male could invade their privacy and claim his right to be there. I thought of the numerous predators I had personally caught in our facilities trying to gain access to our girls. I worried about the implications for women’s sports teams and homeless shelters. The slippery slope was seemingly endless and cluttered with deeply harmful consequences for women. 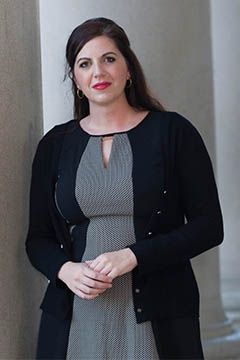 So I declined the assignment and appealed to the good Christian men around me to defend my cause, but no one would.

And I got fired.

I was soon employed by the statewide campaign to repeal the open locker room law in Washington state. When I realized that we were strongly opposed by heavyweight companies, I knew we would need the help of the local church in order to be successful.

However, I was devastated by what I discovered next.

The church, it seemed, was in the midst of its own identity crisis. While a few faithful churches rose to the challenge, most of our requests for help were met with the same response: We don’t want to be perceived as being unloving to the broken.

One volunteer called more than 150 churches to ask for support, and only seven said yes.

Too many churches have come to embrace a flawed definition of love, and it’s killing our witness and our impact.

Since I first publicly shared my history of sexual trauma, I have heard from hundreds of women from across the country with heartbreaking stories. From lesbians to radical feminists to conservative Christians, one of the most painful but recurring themes in their stories is this: When I asked the churches to help me, no one would.

But, dear church, our need to feel loving cannot supersede our responsibility to truly love well. The world has convinced too many of us that truth is bigotry, real love is hate, silence is golden and if it feels good it is good. There’s nothing wrong with transgender ideology, right? After all, God loves everyone, doesn’t He?

But true love isn’t defined by the world; it’s defined by the One who laid down His life to redeem the world. And the Jesus model doesn’t always feel warm and fuzzy. Sometimes it’s unspeakably lonely and wildly unpopular. Jesus said “Come as you are,” but He never said “Stay as you are.” Instead, He said, “Go and sin no more.” In order for the church to be salt and light, we need pastors who are prepared to contend with the brutal reality that salt stings wounds and that light blinds those who are committed to darkness. True love looks as much like Gethsemane as it does like Heaven, and sometimes it will feel like death.

Isn’t that what Jesus promised? Isn’t that the kind of selfless, sacrificial love He gave?

While I wasted years of my life waiting for a fairy tale prince to define my sense of worth and identity, a real live King had already stormed the gates of hell to give me a new one. I’m no longer a harlot or a college dropout or a failed wife. I am a daughter of the King, and as such, I have both the confidence to expect better treatment for women and the courage to do everything within my power to demand it.

But these battles require an army, not isolated soldiers. We are reviewing every possible option to repeal the bathroom/locker room law in Washington, including the option of refiling an initiative to have the voters repeal it. We need the church’s help. A church that intimately knows the heart of her King does not fear conflict with the world; she embraces the conflict as His vehicle to radical transformation.

True love inspires boldness and action. As gender identity politics sweep the nation, the church will have ample opportunity to rise to the challenge and demonstrate love. Only the Jesus kind will do. ©2016 Kaeley Triller

Kaeley Triller is director of communications for the Just Want Privacy Campaign in the Seattle-Tacoma metro area.