For a second day, crisis-trained Billy Graham Rapid Response Team chaplains accompanied Samaritan’s Purse volunteers to a home in Williams Lake, BC, that had been burned to the ground by a catastrophic wildfire. 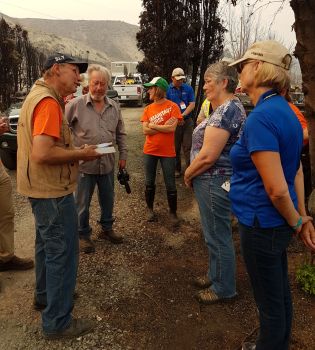 “The chaplains were very compassionate with people, but also intentional in presenting the Gospel and the hope it represents,” Jay McAlister, pastor from Calvary Church in Williams Lake.

As the volunteers continued to clean up the property and search through ash and rubble for anything that survived the blaze, chaplains renewed their relationship with the heartbroken homeowner.

The Rapid Response Team, and Samaritan’s Purse, spent two weeks in August with many homeowners like this, providing physical and spiritual care to Williams Lake residents who lost everything to wildfires that have burned in the BC interior for most of the summer.

He was grieving not only the loss of his home, but also the beautiful landscape that had surrounded it. After praying with him and his family the day before, chaplains found the man was now very open to hearing the Gospel, which is “the power of God for salvation to everyone who believes” (Romans 1:16, ESV).

After explaining the hope and peace that Jesus Christ offers to everyone, the man willingly joined chaplains in a prayer of salvation.

“When he had finished, his face reflected such a look of relief and peace,” said Holly, one of our chaplains.

Jay McAlister and Evan Fletcher, pastors from Calvary Church in Williams Lake who volunteered for a day with Samaritan’s Purse, watched the Rapid Response Team chaplains doing work which is made possible through donations from Canadians like you. 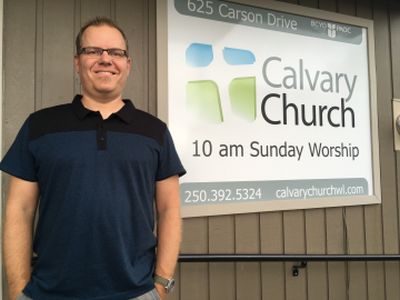 “The chaplains were very compassionate with people, but also intentional in presenting the Gospel and the hope it represents,” Jay McAlister, pastor from Calvary Church in Williams Lake.

“The chaplains were very compassionate with people, but also intentional in presenting the Gospel and the hope it represents,” Jay said.

“They’re really good at being able to comfort people, respond to cues they might be leaving, and taking advantage of opportunities to share Christ,” Evan added.

We praise God that our chaplains were able to pray with 400 residents and volunteers, and for the eight people who dedicated their lives to Christ, in Williams Lake and earlier this summer in the wildfire-devastated BC community of Boston Flats.

You can ensure this vital ministry of compassion, prayer, and evangelism continues and expands through your financial support and prayers. Please join us.