Christians from across Portugal woke up happily tired after a weekend of watching God answer their prayers.

Happy because a combined audience of more than 27,000 heard about God’s incredible love for them at the Festival da Esperança (Festival of Hope) with Franklin Graham on April 6-8, 2018.

More than 1,100 indicated decisions for Christ at the two-day event.

The Festival drew the saved and unsaved from across Portugal to Lisbon’s Campo Pequeno stadium. In a country where evangelicals make up only 3 percent of the population, there’s an uphill battle to share Christ.

But the responses at each service showed the power of the Gospel message to overcome any obstacle.

>> See photos from the event.

On Sunday, Franklin Graham spent a good amount of time addressing the misconception of religion equaling a relationship with Christ.

“We have to be born spiritually,” he said, referring to making a decision to follow Christ.

“Just because we have religion doesn’t mean we have been born spiritually.”

Rodrigues Pereira, former manager of Benfica, one of the most successful soccer clubs in Europe, helped mobilize churches in the area.

“We are breaking barriers. Because many times people don’t understand Christianity,” he explained.

“They don’t understand you have to have a relationship with God. And I think this event [introduces] that idea.”

The Gospel: ‘A Beautiful Message’

Miguel Sousa is Catholic but came to the Franklin Graham Festival at his stepfather’s invitation.

Wheelchair-bound at 52 years old, doctors told him he wouldn’t live past 20 because of his rare muscular disease.

“My disease is hard, very difficult to carry,” he explained.

When Franklin Graham led the prayer of salvation, Miguel joined in.

“I put my face down and also prayed,” he said. “To hear that Jesus Christ died on the cross for our sins touched my heart.

”It was very beautiful to see this (the Gospel) for the first time,” he said.

Passing Down a Legacy of Faith

Seeing all the young people who received Christ this weekend was beautiful for Josue Filipe da Ponte, who lead the Youth Leadership Team for the Festival of Hope.

About half of the indicated decisions for Christ over the weekend were children and teens.

“We didn’t expect to see so many children at the event,” he said. “For me, this was like a cherry on top of the cake to see children and teenagers come to Christ. It was very inspiring for the future.”

But it doesn’t end there. The Billy Graham Evangelistic Association will help connect new believers with a local Bible-based church.

That’s key, said Pereira, to let them know a decision for Christ is only the first step.

“You will be in the place where people will love you—the church’s love and the brothers,” he said. “That will help you to have a relationship with God.”

The Campo Pequeno arena erupted in applause as Franklin Graham brought up his father Billy Graham. This past weekend’s Lisbon Festival was the first Crusade event since Mr. Graham died.

“My father just passed away a few weeks ago,” Franklin said. “His address now is heaven.”

Just as his father shared God’s love for nearly 80 years, Franklin Graham didn’t leave Lisbon before extending an invitation for the Portuguese people to come to Christ.

“Where will your address be,” he asked. “Will it be heaven?

“Are you sure? Are your sins forgiven?”

After Franklin Graham preached a clear and concise Gospel message four times at the Festival of Hope, many in Portugal are sure today.

Do you know if you’re going to Heaven? Start a personal relationship with Jesus Christ today. 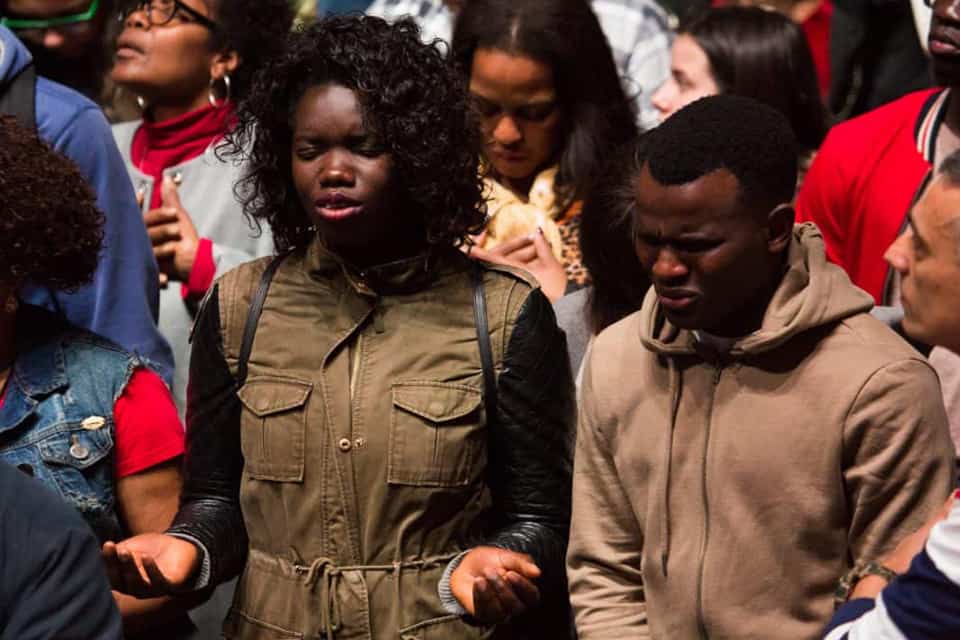