Jumping and dancing with big smiles, Scots pumped their fists as the Newsboys belted out “God’s not dead, He’s surely alive.”

Echoing Will Graham’s message at the Central Scotland Celebration of Hope.

“Salvation is a person and His Name is Jesus. … He’s the only One who died [on the cross] for your sins. He came to save you,” Will Graham told a Sunday night crowd of over 4,000. “All you have to do is receive it as a gift,” he said.

Below are stories of three people at the Celebration whose lives changed because they said yes to God’s gift of eternal life:

When Pauline Mcgachy takes her grandson Shane to church, she gives him a pence for the offering plate. He also watches his grandma empty her pockets.

“Gran, why are you giving all that?”

“It’s not mine to start with,” she explained. “I’m giving it back so other people and children can be blessed.”

So together they made a special box and called it “The Gift.” Whenever Shane got any money, he’d put it in the box. He knew about the Celebration because his gran had trained to be a prayer volunteer.

“Yes,” said Pauline. She took all 26 pounds and one pence and turned it in.

When Shane came to the Celebration Friday night, he listened closely to Will Graham’s message about Jesus. He jumped up and went down to pray and receive Christ’s gift for himself. When they got home, he asked his gran, “Can we study about what Jesus does for us?”

Shane’s story was shared at the Celebration, and he was affectionately referred to as the “26 pound, 1 pence boy”—who gave everything he had.

Pauline’s prayers were answered. “I was so proud and tears came down my face.”

>> See photos from the Central Scotland Celebration of Hope.

“For my kids to know the Lord is everything.”

David Hunter has two young sons, Ayden and Leighton. “I have a double blessing,” he explained.

“I was depressed, had a drug addiction, anger, gambling addiction and just had no hope.

“I was unloved, unwanted, rejected and then I cried out to the Lord.”

Now he feels loved and wanted. “I’m a new creation. … I’ve been redeemed and saved.”

David doesn’t keep it to himself. He regularly hands out New Testaments and food to the homeless in nearby Stirling.

By himself, not part of an organization.

‘Isn’t That a Religious Thing?’

Schoolteacher Ian Paget talked to his boss about faith the entire school year.

He finished his work contract but wasn’t finished sharing with his friend. “She was really closed off to Christianity,” he explained. “Didn’t like it at all.

“I just talked to her about what Christianity is really about.”

When the Celebration of Hope neared, Ian volunteered to help.

“You really have to come to this thing,” he told her.

“Isn’t that a religious thing” was her reply. She ended up coming to the Celebration with another teacher. Ian was a prayer volunteer, and went to thank her for coming. He couldn’t find her anywhere.

Ian eventually saw her—down front—because she had surrendered her heart to Christ.

When she came here, Ian said, and was around true, caring Christians,“all of the prejudices, all the things she’d believed about Christianity didn’t exist in this place.”

Instead she found unity among believers and real love.

And suddenly it all made sense.

What does it mean to be a Christian? Start here. 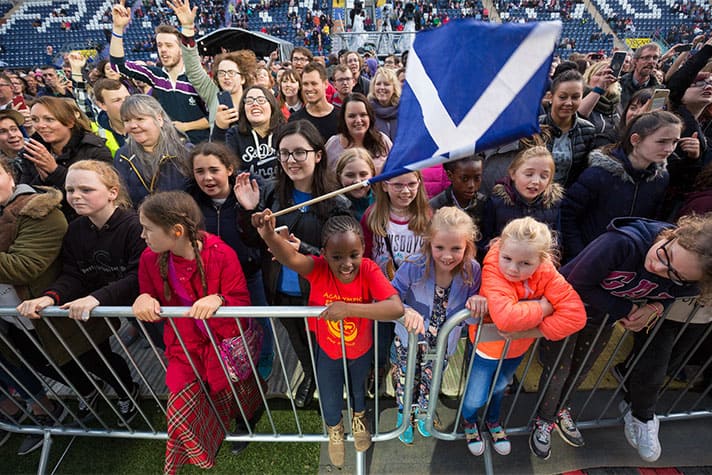