Each night, 600 people took the train from Bakersfield to the 1962 Billy Graham Fresno Crusade. But Bettie Turner insisted on driving the 200-mile round trip. For her, the Crusade was more than an exciting event with masses of people. She hoped to figure out how to know the Lord. Her daughter, author Bodie Turner Theone, could see the longing on her mother’s face. 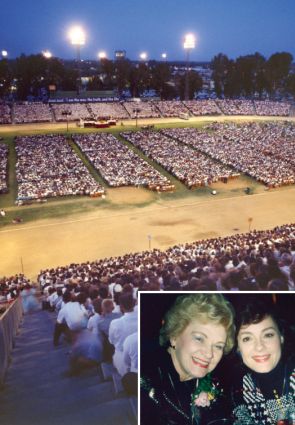 Sherwood Wirt, a former Decision editor, described the July event as “a delightful lawn party with balmy evenings, Spirit-filled music, strong preaching, and lovely people of every description.” Among them was young Bodie, red curls bobbing as she climbed the Radcliffe stadium steps to sit beside her mother.

Bodie doesn’t remember the exact words spoken or what songs were sung. But she’s never forgotten how, when Billy Graham gave the invitation for people to come forward, her mother leaned over with tears shining in her eyes and said quietly: “I’ll go, if you go. Will you come with me?”

Together they walked forward, and Bodie watched her 44-year old mom ask Jesus into her heart. “I did not accept Christ until much later,” Bodie said. “But I knew that night changed [my mom] forever. The joy of the Lord was like an explosion of love! The effect of meeting Jesus was so powerful that from that night, her heart and mind were fixed on finishing the marathon of this life and crossing the finishing line in Heaven as saints and angels cheered her victory.”

Over the years, Bodie watched the Holy Spirit transform her mother. Bettie studied Scripture through Bible Study Fellowship and shared what she learned at every opportunity. It was as though “the Lord in her was irresistible to everyone she met,” said Bodie. Nothing was more important than sharing Jesus.

“She waited for Decision magazine to come out,” Bodie said, “and would even give extra copies to the guys in the office.” An old journal entry described how Bettie put a copy of Life Eternally Yours on the table in a hotel lobby and watched to see who picked it up. Then she began to pray and asked God to reveal Himself to the woman. Bettie constantly shared her faith.

One by one, Bodie’s sisters came to know Christ, and so did her little brother. Their dad also accepted Christ and began taking the family to a Bible-teaching church.

Most people thought Bodie was a Christian, too, but she didn’t really comprehend God’s grace—until she became a mom. While holding her baby daughter, Bodie told her husband, Brock, I hope God doesn’t do something to Rachel because He wants to teach me a lesson.”

Brock comforted his wife. “God loves this baby more than you do,” he said. “And furthermore He loves you as much as you love her.” Though she had prayed to accept Christ in high school, in that moment Bodie finally understood how much God loved her. She genuinely repented and received her Savior by faith.

Her mother had been demonstrating the immensity of God’s love for years. Occasionally it involved a vivid reminder of Kingdom thinking.

In the 1970s, Bodie started climbing the ladder of success, writing articles for magazines such as the Saturday Evening Post, U.S. News and World Report and American West. She also worked as a screenwriter for actor John Wayne’s production company and co-wrote The Fall Guy. At one point, her mother challenged her. “What are you doing?” she asked.

Her mom didn’t wait for a response. “You’re wasting your time,” she told her. “You need to be telling people everywhere about Jesus!”

Bodie responded to her mom by turning to God and asking, “What do You want me to do?” Before long she quit working for The Duke, stayed home to raise her babies, and started writing books. Like her mother, Bodie’s irrepressible joy began testifying to God’s power, goodness and love. Soon Brock began contributing the historical details.

Bodie’s books go far beyond the compelling stories that entertain her readers.

One reader, Cheryle Coapstick, described her response to a Thoene novel.

“This was not a book,” Cheryle said. “This was not a story. It was not a pleasant evening’s pastime. It was in-your-face life. The good, the bad, the evil. As I read, I lived!”

Bettie—Bodie and Brock’s biggest fan—gave their books away to everybody. She told her daughter: “This is what you need to do for the Lord. Let people know the Word of the Lord is in these stories.”

Bettie’s advice led Bodie to a career path that has resulted in more than 70 novels. The Thoenes’ award-winning books have been translated into 20 different languages and have sold more than 35 million copies.

Their most recent release, When Jesus Wept, was published by Zondervan this year. The first book in the Jerusalem Chronicles series, it explores the relationship between Jesus and the man he raised from the dead, Lazarus. Robin Hanley, the artist who designed the cover, said: “As I read this book, I remembered experiencing this same palpable anointing at another time in my life. Something so magnificent and holy that it transcended time and space. Ah yes! When I saw the Sistine Chapel! When Jesus Wept is Bodie Thoene’s finest. She has a gift that is unparalleled by any other writer.”

A gift nurtured by her mom. Bettie Turner finished her earthly race in 2007, knowing the light of Christ, the Savior whom she met at the 1962 Billy Graham Crusade in Fresno, would continue to shine through her children. Since her mom’s departure, Bodie has depended on God to fill that void in her life. She is reminded in Isaiah 66:13 that as a mother comforts her child, so the Lord will comfort her. D 2014 PATTI TOWNLEY-COVERT