After ISIS-linked Islamists murdered unsuspecting citizens in Paris on Nov. 13 and in San Bernardino, Calif., on Dec. 2, crisis-trained chaplains with the Billy Graham Rapid Response Team (RRT) were on the streets in both cities, offering a “ministry of presence” to stunned citizens.

In both cities, the RRT chaplains worked closely with churches and emergency responders to assess needs, and then went to work at eye level with those gathered at makeshift memorials in the days after the bloodshed, offering the hope of Christ amid fears that another violent attack could occur.

Following both tragedies, those fears added a layer of trauma that chaplains had to be mindful of, said Jack Munday, international director of the Billy Graham Rapid Response Team.

The deployment in Paris, where 130 people died and hundreds more were injured, marked the first time RRT chaplains have responded to a terrorist event since the team was formed, Munday said. Seven chaplains from the U.S., Canada and the U.K., including five French speakers, ministered there for more than a week while also training local churches to share God’s hope in times of crisis.

Ray Thompson, an RRT chaplain who deployed with his wife, Suzanne, said prayer meetings at several Paris churches displayed the Holy Spirit’s work among believers in a country where only an estimated 3 percent of the population is evangelical.

One of the prayer meetings was “just on fire,” Thompson said. “There were people standing in the back, somewhere around 300 people there.

“I saw God’s hand moving very profoundly,” he said. “On the street, it has been different,” with many prayers offered and gracious responses from the French people, but with scant tangible fruit.

“I think God is moving mightily in the Christian community,” Thompson added. “They are really rallying.”

Munday said the ministry spark among the Paris churches in the aftermath of the attacks could be a catalyst for a renewed evangelistic fire in the city.

Laurent Trabadello, an RRT chaplain and a native of France who now lives in Canada, said because the terrorists hit areas beyond the tourist sites where everyday Parisians live and work, “there was an overwhelming sense of disbelief and disenchantment.”

Trabadello said he was surprised that even with Paris’ secular culture, everyone he encountered was polite, and most were thankful when chaplains engaged in conversations with bystanders at the memorial sites or offered to pray with them.

“Sometimes I would tell people, ‘This is what we do. We come and offer prayers for you, for your friends, for your city.’ … There was a lot of openness and thankfulness. We were not seeing people wanting to accept Jesus as Savior, but we were seeing people take steps in that direction. As a Frenchman, I’m very encouraged by that.”

Among the many atheists the chaplains encountered was a middle-aged man who was adamant in his beliefs. The man was impressed that a chaplain would take time—about 30 minutes—to listen to him explain his thoughts. After the atheist finished talking, he seemed moved and told the chaplain that “nothing happens by chance” and that he believed there was a reason he had encountered the chaplain. After briefly sharing about his faith in God and the hope He offers, the chaplain told the man that he would be praying for him. The atheist smiled and thanked him. 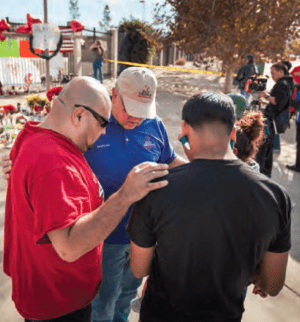 SAN BERNARDINO: Chaplains pray with mourners at a memorial near the site of the shooting.

In San Bernardino, where a husband and wife shot 14 people to death and wounded 21 in an ISIS-related attack, RRT chaplains were ministering to the grieving within a few hours of the shooting.

The crime scene was cordoned off and well guarded by police for days, but a makeshift memorial at a nearby intersection drew hundreds of mourners, who crowded in and out about 25 people at a time, said Jim Giannestras, an RRT chaplain who deployed to San Bernardino with his wife, Sandy, from their home in Encinitas, Calif., about two hours south.

The couple was among 10 RRT chaplains who ministered there for five days, offering prayers and encouraging people who were shocked and fearful.

“Fear was a big issue, and so was numbness for anyone associated with the actual victims,” Giannestras said. “But people who knew someone who worked there and knew it was possible that their friends or loved ones were in the building, it was just that stunned kind of disbelief, like ‘How could this happen here?’”

As information trickled in, the memorial site became a place for people to pay respects for the dead and to process what had occurred, Giannestras said.

A woman named Lupe told Giannestras that it is common to hear of shootings and gang violence, but that this was different.

“Crime is an attempt to get something that doesn’t belong to you. This was terror that had nothing to do with gaining anything,” Giannestras said. “It really struck people in a deep, deep way, and they were stunned. Almost immediately, people began to bring something as close as they could to the scene. That’s how that memorial got set up.”

From teenagers who seemed shocked into sobriety by the events, to community members who felt a connection even though they knew none of the victims, to family and friends of those who were killed, the chaplains offered the same presence and compassion that their colleagues in Paris did.

“People would just get down on their knees in the dirt there and lay down a flower and cry. … The people on the street were very open to just have someone come stand next to them and ask them a simple question, maybe, ‘Do you live here?’ or ‘Did you know anyone personally?’ From that, they would open up and share a lot about their lives,” Giannestras said.

Of more than 400 people with whom chaplains prayed, four made professions of faith, including a man suffering from post-traumatic stress disorder who was weeping and sobbing uncontrollably.

A chaplain put his hand on the man’s shoulder and let him cry until he could compose himself enough to look up. After about 15 minutes, the man began to speak.

“He shared about his battle with PTSD and his long season of treatment and struggle,” Giannestras said. “And the events had caused him to realize again that he needed complete healing, something that his treatment and medications weren’t offering. And he asked the chaplains, ‘What do I need to do to be saved? I need God to help me so I can help others.’”

The chaplains led the man in a prayer of salvation and connected him with a local church for follow-up and discipleship.

“After a terrorist attack,” said Munday, “people are looking for answers, they are looking for comfort, but it seems as though the need for peace is even greater as people contemplate the uncertainty of life.

“From the polls I’ve seen, the No. 1 concern in America right now is not the economy, it’s terrorism. As the Billy Graham Rapid Response Team, we need to do all we can to have more people equipped to respond where fear has gripped hearts and lives. That’s our plan as we prepare for the days ahead.” D ©2015 BGEA