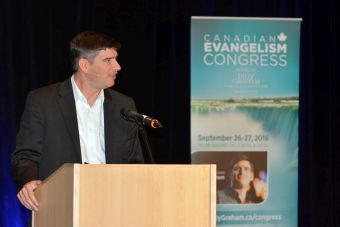 Will Graham, keynote speaker at the Canadian Evangelism Congress, emphasized that for evangelism to happen, Christians have to want to have an impact on their communities.

When it comes to sharing her faith in Jesus Christ with loved ones, neighbors, and co-workers, Dominique Paquet has no trouble admitting it: “I’ve lost the spark. I’ve been in a desert.”

Dominique, a volunteer with the Salvation Army in Toronto, saw the Canadian Evangelism Congress in Niagara Falls as a way to get out of the desert. And it worked.

“It’s hard to find people who have that passion for lost souls,” she said between sessions at the Congress, which was hosted by the Billy Graham Evangelistic Association of Canada. “So it’s nice to be around others who feel like me. I’m getting good ideas here. It’s inspiring and motivating.”

The goal of the Sept. 26-27 event was to equip and inspire pastors, church leaders, students, and anyone else who truly wants to “Go into all the world and preach the gospel to every creature” (Mark 16:15, NKJV).

Among the speakers assembled to accomplish that goal were Will Graham, Sam Owusu of the multicultural Calvary Worship Centre in Vancouver and Victoria, Mark Hughes of Winnipeg’s Church of the Rock, and Rick Hiemstra of the Evangelical Fellowship of Canada.

They described the reality of a very non-Christian, secular Canadian culture and revealed ways for churches to become relevant and have a lasting kingdom influence in their communities. For Will Graham, it all starts with simply wanting to have an impact.

“We don’t see people as lost,” he said during one of his two congress messages. “We just see them as Facebook friends and Twitter followers. We need to repent of that and ask God to help us see what He sees—lostness.”

Will, who is preaching at Celebration of Hope outreach events in Newfoundland and Labrador this month, reminded his audience that the Gospel “is better news that anything you’ll ever hear. God is always inviting humanity back to Himself, but we preach everything but that. We doubt the power of the Gospel.”

Mark Hughes, who hosts a weekly Christian TV program seen across Canada, agreed with Will. 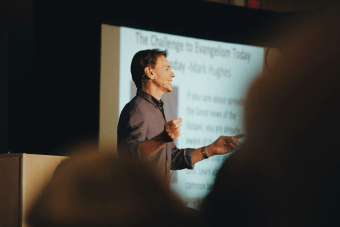 Mark Hughes of Winnipeg’s Church of the Rock told his audience that churches need to tailor their messages for non-Christians.

Mark’s congregation, Church of the Rock, has employed unique and high-profile means to tell people that when it comes to salvation in this life and the life to come, “there is no other name under heaven given among men by which we must be saved … it is the name of Jesus Christ of Nazareth” (Acts 4:10-12, NKJV).

The church presents large-scale dramatic performances based on popular movies such as Pirates of the Caribbean (which the church renamed Pirates of the Galilean), and music adapted from secular pop music groups like Van Halen and the Beatles. The performances are used to invite people to repent of their sins and dedicate their lives to Christ.

Mark and other Church of the Rock pastors include an invitation for people to become Christ followers in every message at every service. When he started this God-inspired practice 20 years ago, Mark recalled that no one responded to the invitation for three months. But he refused to stop. Today, at least one person dedicates or rededicates his or her life to Christ at every Church of the Rock service.

These were welcome words of encouragement to Charmaine Hinds, who attended the congress. The creator of Worship In Motion, a Toronto dance training ministry, Charmaine noted “The flame (for evangelism) needs to be fanned and if it’s not, the passion dims and Christians get discouraged. Things like this congress fan my flame.” D 2016

Christians can find more opportunities to be encouraged and equipped for evangelism through ReAwaken. Learn more about this one-day Billy Graham Evangelistic Association of Canada seminar—including how your church can host one—at BillyGraham.ca/ReAwaken