Since Queen Elizabeth’s death on Sept. 8, hundreds of thousands of visitors from across Great Britain and around the world flocked to London to pay their respects to the Commonwealth’s longest-serving monarch.

Countless thousands of flowers, cards, and mementos lined the gates of Buckingham Palace and Windsor Castle as people gathered to commemorate the Queen’s remarkable life and leave a gift or message in her honor.

But it was a different message — the message of hope in Jesus Christ — that changed lives on the streets of London.

Shortly following the announcement of the Queen’s passing, crisis-trained Billy Graham Rapid Response Team chaplains from our Canadian, U.K., U.S., and Australian offices were deployed to Buckingham Palace and Windsor Castle. They stood, rain or shine, for up to 12 hours each day offering spiritual and emotional support to anyone in need.

Chaplains found that people of all faiths, from Hindus to Catholics, were very open to conversation. Even some of those professing to be atheist or agnostic were willing to receive prayer when offered. 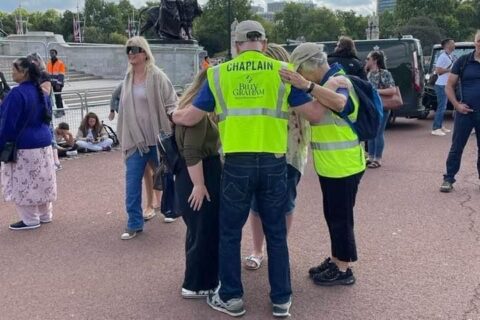 Many people who described feeling lonely, afraid, and deeply uncertain about the future received prayer and encouragement. Some volunteered specific prayer requests for healing, jobs, relationships, or emotional needs — people like Stuart, who remembered coming to the palace as a child.

Impacted by the Queen’s death, Stuart expressed concern about life after death and whether or not heaven was real. Our chaplains were able to pray with him and encourage him to seek answers in Jesus.

While being interviewed by NBC News, one chaplain had a lengthy conversation about Jesus and salvation with the reporter, who said he was an atheist, but expressed genuine interest in the chaplain’s testimony.

Chaplains were also able to encourage and pray with a number of people who said they had given up on their faith after the death of a loved one. One woman, who confessed being angry with God since her husband’s passing, received prayer and was visibly moved.

By the grace of God, some of our chaplains had the privilege of having God use them to lead several individuals to faith in His Son. 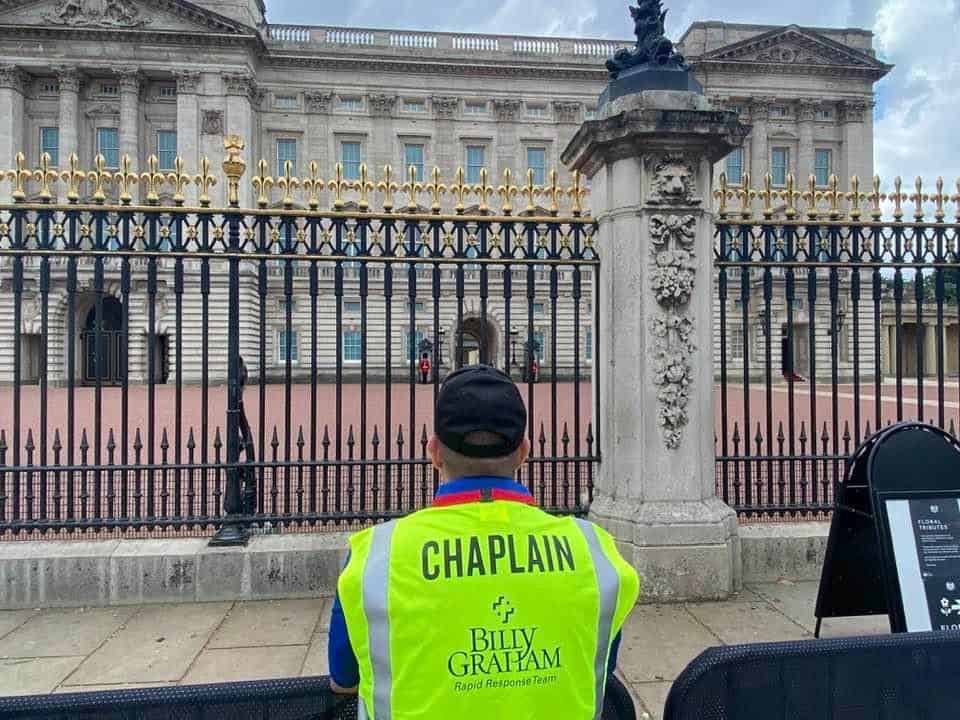 On one of these occasions, a group of chaplains was approached by a homeless man wearing a Halloween costume. Despite his slightly startling appearance, the man was friendly and eager to chat.

One of the chaplains, with 18 years of experience running a crisis addiction center, shared with the man about the promise of freedom in Jesus. After some time in conversation, they knelt down together at the top of Trafalgar Square and the man gave his life to the Lord. The chaplains then walked him over to St Martin’s, a church that is known for its ministry to the homeless.

One of our chaplains serving in the Buckingham Palace area struck up a conversation with a young volunteer from the mayor’s office and began sharing the Gospel with her. As they interacted, the woman was profoundly moved and told the chaplain she wanted to know Jesus. Right there at the palace gates, she prayed the salvation prayer with the chaplain and committed to finding a church to attend.

While many have rightly expressed admiration for the Queen’s humility and unwavering dedication to service — a commitment she held steadily almost to the day of her death — it is her lifelong faith in Jesus Christ that paved the way for this opportunity to share the Gospel with so many people.

In the days to come, please pray for every seed that has been sown in prayer and conversation – that those seeds would grow into a life-changing faith in He who is “the way, and the truth, and the life” (John 14:6, ESV).