In this article, which first appeared in the May 2016 edition of Decision Magazine, Pastor Dale Evrist explains the unwavering protection God offers through Christ. Find hope in this message, even if you don’t have an earthly dad to celebrate this Father’s Day.

The picture of Shaun Cunningham’s outstretched arm shielding his young son’s face from an errant baseball bat at a March 5 spring training game between the Atlanta Braves and the Pittsburgh Pirates quickly went viral on social media.

If a picture is really worth a thousand words, surely none of those words were as rich in meaning as what Landon Cunningham, a 9-year-old Braves fan, said about the prospects of danger from flung bats and foul balls at baseball outings. 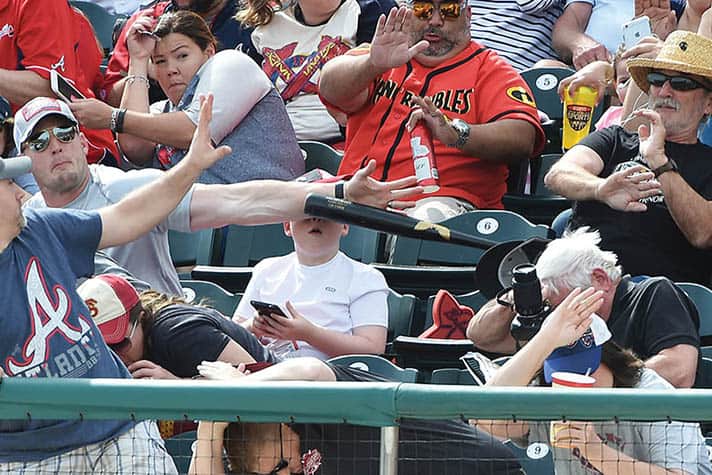 Shaun Cunningham deflects a flying bat to save his son, Landon, from certain injury.

Dale Evrist, pastor of New Song Christian Fellowship in Nashville, Tenn., and author of a book on God’s protection of believers called The Mighty Hand of God, would agree.

When Evrist saw the photo of Shaun stretching out to shield his son—who was looking down at his dad’s phone when Pirates outfielder Danny Ortiz’s bat went flying toward the stands—he almost immediately thought of theological parallels.

“If an earthly father’s instinct in protecting his child enables that father in a split second to ward off a projectile coming at his son to do him harm, and if we serve the God and the Father of theHow Much More, then how much more will your heavenly Father give good things?” Evrist toldDecision, quoting from Matthew 7:11. “He knows the bat’s coming. He’s the helicopter over the parade. He declares the end from the beginning.”

Scripture is full of instances in which God protected His people—always with His divine purposes in mind.

In Acts 9:15, the Lord says that Paul “is a chosen instrument of mine to carry my name before the Gentiles and kings and the children of Israel.” Although Paul and all the other apostles except for John died as martyrs, Paul’s life had God’s protection amid shipwrecks, a stoning, beatings, venomous snakes and other threats until his work as a missionary was fulfilled. He suffered but was not crushed.

Evrist notes: “When the servant of God walks in faith and obedience, they are indestructible until God’s plan for them has come to completion.”

Where Prayer and Protection Meet

Steve Gaines, pastor of Bellevue Baptist Church in suburban Memphis, admits he doesn’t comprehend why God allows evil in one place—he mentioned the church shooting in Charleston, S.C., last June as an example—yet stops it in another.

But he’s grateful in those times of protection, all the same.

Gaines is adamant about the role of prayer in the life of believers. He authored a book study, Pray Like It Matters, which is used in churches across the country. And he is certain prayer mattered on Easter at Bellevue.

“When the servant of God walks in faith and obedience, they are indestructible until God’s plan for them has come to completion.”
-Pastor Dale Evrist

Some 75 people gathered the Saturday before Easter to plead for the safety and spiritual condition of each person attending Easter services the next day. Such prayer over each seat in the worship center is a weekly work of a small but committed team of church members.

Prior to the final service March 27 at Bellevue, which draws more than 6,000 people each Sunday, a greeter noticed a man carrying what looked like a partially concealed pistol.

She quickly notified a security officer, who stopped the man. After a brief conversation with the man, the off-duty Memphis policeman discovered that a bag the man was carrying contained a rifle and a large amount of ammunition.

All the while, the third service was delayed in starting because a woman had fallen and was receiving medical attention near the sanctuary exit the man was attempting to enter. Her accident kept him from entering the service.

Gaines said authorities believe the man was delusional, and it was unclear what his motives were, but Gaines is certain the potential for bloodshed was averted.

The right response to such protection, Gaines said, is thanksgiving and praise.
“The Bible says in Psalm 127, ‘Unless the Lord builds the house, they labor in vain who build it. Unless the Lord guards the city, the watchman keeps awake in vain’ (NASB). Ultimately, the Lord is our protector.”

The character of God is on full display in the Psalms. In Psalm 121:1-3, the psalmist writes of Israel: “I lift up my eyes to the mountains—where does my help come from? My help comes from the Lord, the Maker of heaven and earth. He will not let your foot slip—he who watches over you will not slumber.”

Second Thessalonians 3:3 says, “But the Lord is faithful. He will establish you and guard you against the evil one.” In His model prayer, Jesus teaches the disciples to pray, “deliver us from evil.”

Again, Evrist emphasizes, “When the servant of God walks in faith and obedience, is the enemy looking for ways to take us out? Certainly. But I really think in most cases he needs our cooperation, where we put ourselves in harm’s way by not being in the right place and doing the right thing.

“When you really start crunching the numbers, you find that far and away, most Christians can point to a place where God’s hand of protection was evident. You can go through World War I, World War II, Korea, Vietnam, Iraq and Afghanistan—so many stories of people saying ‘I shouldn’t be here today. God’s hand really protected me.’”

Ultimately, God has the prerogative over our life and death.

“And so,” Evrist says, “we can take comfort in knowing that if someone is walking with God and God’s plan for them really has come to completion, and that their life on this earth is over, I can completely live with that.”

This article first appeared in the May 2016 issue of Decision Magazine.