On a daily basis I’m blessed with memories and stories of the many ways God chose to use my grandfather to reach people around the world over the course of many decades. Nearly everywhere I go people stop to tell me about how entire families and generations were impacted by his ministry. It’s humbling.

What many people may not know is that it almost didn’t happen. Everything we know of the ministry of Billy Graham from the late 1940s on – the massive stadium events, the evangelistic movies, the radio programs, the counseling of presidents and kings – hinged on a singular moment in history that took place at the California retreat center of Forest Home.

I visited Forest Home last year to get a fresh perspective on my grandfather’s story, and I’m returning there next week to speak at their annual Summer Family Camp.

As such, now seemed like the right time to share the story of the evangelist named Billy Graham, a discouraged young man searching for answers and direction in his life, unsure of God’s plan for him.

At the mid-point of the 20th century, he had already been an evangelist with Youth For Christ and had preached across Europe in the aftermath of World War II. He had held his first “Billy Graham Crusades” in places like Charlotte, N.C, and Grand Rapids, Mich. He was also the president of Northwestern College in St. Paul, Minn., the youngest college president in the country.

Not everything had gone as planned, however. His crusade in Altoona, Pa., had been – in his own words – “a flop.” It was spiritually difficult and he felt things had gone poorly, and it left him questioning whether or not evangelism should be his focus.

At the same time, a very good friend and contemporary of my grandfather’s, a man named Charles Templeton, had begun challenging my granddaddy’s way of thinking. Mr. Templeton, who had preached with Youth For Christ as well, had gone on to study at Princeton, where he began to believe that the Bible was flawed and that academia – not Jesus – was the answer to life’s problems. He tried to convince my grandfather that his way of thinking was outdated and the Bible couldn’t be trusted.

My grandfather had more questions than answers. 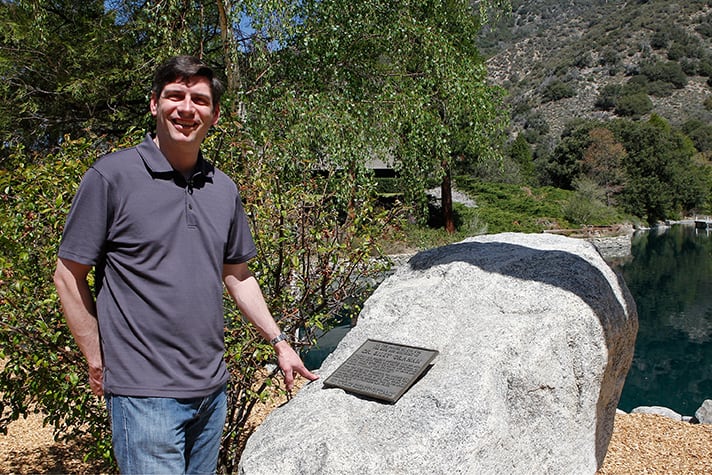 As a young man in his early-30s, all of these things were swirling in his mind when he traveled to California in 1949. Should he invest fully in the college, which he knew meant seeking further education for himself? At the time Northwestern wasn’t accredited, and for it to become so he – as president – would need to get an advanced degree, which would require taking several years off from preaching.

Should he leave the school and follow the calling of an evangelist, even though Altoona had gone so poorly?

Did he even believe the Bible from which he was preaching, or should he follow Templeton in questioning its validity?

It was at this time that my discouraged grandfather reluctantly accepted the invitation of Henrietta Mears to visit and speak at a Christian retreat center called Forest Home. Mears had worked at First Baptist Church in Minneapolis for Pastor Riley, who was also my grandfather’s predecessor at Northwestern, and she was a very well-known and godly woman. She would end up having a huge impact in Hollywood, Calif., as she served as the director of Christian Education at First Presbyterian Church of Hollywood. She took grief for inviting him to speak because he was not part of the camp’s denomination, but God had a plan in all of this.

As I toured Forest Home last year, it moved me greatly to walk the paths that my grandfather walked as he struggled with the Lord, and ultimately had the experience that would change the course of his ministry and the eternities of millions.

You see, while he was at Forest Home, he spent a great deal of time studying the Bible, and he kept seeing the same phrase pop up. “Thus sayeth the Lord… Thus sayeth the Lord…” While my grandfather had always accepted in his head the authority of the Scripture, this became the turning point as he realized in his heart that God’s Word is divinely inspired, eternal and powerful!

One night at Forest Home, he walked out into the woods and set his Bible on a stump – more an altar than a pulpit – and he cried out: “O God! There are many things in this book I do not understand. There are many problems with it for which I have no solution. There are many seeming contradictions. There are some areas in it that do not seem to correlate with modern science. I can’t answer some of the philosophical and psychological questions Chuck and others are raising.”

And then, my grandfather fell to his knees and the Holy Spirit moved in him as he said, “Father, I am going to accept this as Thy Word—by faith! I’m going to allow faith to go beyond my intellectual questions and doubts, and I will believe this to be Your inspired Word!”*

My granddaddy wrote in his autobiography that as he stood up his eyes stung with tears, but he felt the power and presence of God in a way he hadn’t in months. “A major bridge had been crossed,” he said.

The resulting change did not go unnoticed. The next day my granddaddy spoke at Forest Home, and 400 people made a commitment to Christ. Henrietta Mears remarked that he “preached with authority” that she hadn’t seen before from him.

This was August 1949, and mere weeks later Billy Graham would go on to hold the historic 1949 Los Angeles Crusade in the tent erected on the corner of Washington and Hill Streets. That outreach was scheduled to last three weeks, and ended up going for eight weeks as people packed the “Canvas Cathedral” and media outlets nationwide began talking about the upstart evangelist.

Because of that moment kneeling by a stump at Forest Home, I get to hear stories of lives changed through my grandfather’s ministry. Because of that moment, my father and I are invited around the world to share the same hope of Christ that my grandfather preached in Los Angeles and hundreds of other locations both near and far. That moment not only changed Billy Graham’s ministry. It impacted eternity. 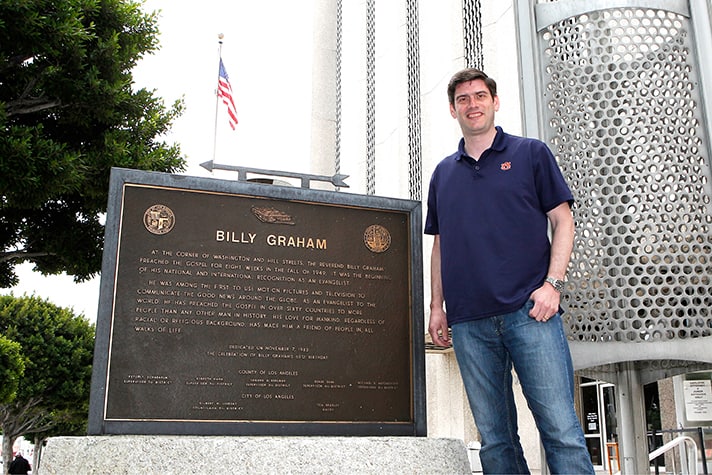