Though he was off duty, it was only natural for Rodney Barrett to stop and offer help as he approached an accident scene at an intersection in his hometown of Wetumpka, Ala. A deputy
sheriff in nearby Montgomery, Ala., Barrett walked up to one of two wrecked vehicles and looked inside the window of the front passenger’s side, which had been T-boned by the other car. Nothing he had ever experienced prepared him for that moment: In that seat was his 15-year-old daughter Skylor, eyes closed, not breathing.

Cops are used to tragedy. They encounter sudden death on a regular basis and are trained to handle even the most gut-wrenching situations with strength and composure.

They investigate, document and sometimes have to break shockingly bad news to family members and friends of the deceased.

Three officers and their wives shared their stories with Decision in October during the first-ever National Law Enforcement Retreat, sponsored by BGEA’s Rapid Response Team, at the Billy Graham Training Center at The Cove in Asheville, N.C.

The pre-eminent part of their testimonies was how the peace and power of God enabled them not only to survive, but also to see life come from death.

RODNEY & DEBBIE BARRETT
The sight of Skylor, crushed, on the morning of March 24, 2006, was almost more than Rodney could bear.

“Literally, I went to the ground,” he said. “I’ve seen people say, ‘That’s my baby,’ and just fall. I totally understand it now. Your blood washes out of your body.

As men, we were made by God to be helpers and fixers. But I couldn’t fix that.” 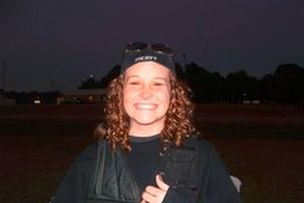 Skylor, pictured right, was passionate about Jesus. She and the friend who was driving were supposed to leave later in the day for a Christian youth conference. Skylor planned to become a missionary in Africa and had raised money for a church plant in Tanzania.

“There’s no in-between at a time like that,” said Debbie. “You either go all God or you go the other way. So Rodney and I surrendered everything.

“There were times when we couldn’t pray because the pain was too hard, but we could sing. We would turn on praise music in her room and just sing.”

SHAWN & KATHLEEN LOUGHRIGE
Like his father, Isaac Loughrige played college football at Central Michigan, planned a career in law enforcement and had a heart to serve others for Christ.

He once took off his brand-new athletic shoes and gave them to a man across the street whose torn, tattered shoes were duct-taped. He consistently befriended underdogs.

At age 21, Isaac was a picture of health—until he contracted the H1N1 virus (swine flu) in October 2009. He became gravely ill and was hurried to the hospital.

His father, Shawn, a criminal investigator for the Michigan state police, recalls tearfully telling his wife, Kathleen, after Isaac was taken off of life support: “Thank you for giving me such a beautiful boy.”

“We’ve never been mad at God,” Shawn said. “Only thankful.”

Said Kathleen: “We never demanded to know the ‘whys?’ We just decided to trust God with what we don’t understand.”

CASEY & AMBER JUSTICE
Molly Justice’s hazel eyes sparkled with joy and brightness. Only 19 months old, she loved nighttime prayers and would ask her parents to say them with her over and over again. Then she wanted “pops” (kisses) and hugs.

Her daddy, Casey, is a Gastonia, N.C. police officer, and her mother, Amber, is a labor and delivery nurse. They live in Shelby, N.C.

This past September, Molly was “helping” her granddaddy while he moved furniture. She sat on the floor eating a grape icy pop as he disassembled a bed. The headboard seemed securely placed against the wall, but somehow fell, grazing his fingertips, and as he desperately reached for it, it fell on Molly’s head.

Instantly, she was unconscious.

Molly was rushed to one hospital, then another. Her brain was bleeding, and she had a skull fracture. Seizures started and, barely three hours after she was sucking that icy pop, she was declared brain dead, though the rest of her body was in excellent health.

Casey and Amber faced a decision they’d never imagined—whether or not to donate Molly’s organs to possibly save the lives of other children.

“It was a question that didn’t require any discussion from either of us,” Casey said. “I just looked at Amber and said, ‘If we can keep another set of parents from feeling what we’re fixing to have to go through, it’s worth it.’”

Casey and Amber took turns rocking Molly one last time, clinging to the hope of the Gospel.

“She used to say when we left the house, ‘See ya! See ya later!” Amber said. “Before we left out of that hospital room, I didn’t tell her bye, because it wasn’t bye. I just said, ‘See ya later.’”

PURPOSE FROM PAIN
The Barretts, Loughriges and Justices still grieve at times, but they’ve chosen to marvel in all that God has done through the deaths of their children.

The Barretts have seen each of their extended family members come to salvation through Christ since Skylor’s passing. They raised money to continue Skylor’s vision for Tanzania and were able to plant two churches there.

The Loughriges have a ministry called “I’ve Got Your Backs” to carry on Isaac’s heart for helping needy and outcast youth.

Other people, including fellow officers, see in them a peace and a hope that is not of this world.

After Isaac’s death, Shawn dedicated himself to an extensive study of Heaven, which he now teaches in a church class.

“As a father,” he said, “you want to know about where your kid is.”

Even on his worst day, Rodney Barrett knew Skylor was having her best day.