Thousands gathered in the small gold mining town of Kalgoorlie, Western Australia, seeking something worth far more than gold.

“We’re excited for what God’s doing here in Western Australia,” Will Graham said in anticipation for a weekend of transformation.

>> View photos from the Celebration

While speaking at the “Church Together” event, Will also talked about the unity seen throughout the Goldfields Celebration.

“It’s one of the greatest testimonies when we can come together and proclaim the Good News of the Lord Jesus Christ together, especially here in an open venue for the rest of Kalgoorlie-Boulder to see,” he said.

Although Church Together was meant to bring area churches together for a combined worship service, many people without a church home—or even a relationship with Christ—attended.

Will candidly shared childhood stories, explaining the close-knit relationship he and his siblings have.

Still, “Even good families have problems,” he said. “Even the Graham family.”

Will then talked about God’s ability to restore every broken family, marriage and relationship in the crowd.

“Some of you here today are mad at God,” he said. “God says, ‘Give it to Me. Give Me your anger, bitterness, brokenness. Surrender it all to Me now and I’ll make you into a new person.’”

By the end of the morning event, more than 130 walked forward during the invitation to accept Christ. Combined with the evening service, the Celebration finale closed with over 200 responses to the Gospel message.

No shortcuts to Heaven

In Australia, it’s common to shorten words and phrases. “Roo” for kangaroo. “Macca’s” for McDonald’s. “Sunnies” for sunglasses. “Brekkie” for breakfast.

But as Will Graham said to a crowd of more than 1,200 on Sunday night in Kalgoorlie, Western Australia—not everything can have a shortcut.

Preaching for the final event of the Goldfields Celebration, he talked about the prodigal son in the Bible who wanted to shortcut the process for getting his inheritance.

“He didn’t want to wait. He wanted it now,” Will explained. “And we live in a world that wants everything now.”

As he gave the invitation to accept Christ, Will assured those listening they’re much better off with God’s timing—and with Him in their lives.

Scanning the crowd that walked forward, it was a moving sight: Two people in wheelchairs having the hope of salvation explained to them. A woman embracing another in her arms for upwards of 5 minutes. A prayer volunteer kneeling on dirt so she could be eye level with a little girl who walked forward. A young man with an arm cast listening with his friend as a volunteer in a Christian motorcycle club jacket prayed with them.

“Being here … this was like a little picture of heaven,” said Josh Havens, lead singer of The Afters. The group performed each night of the Celebration.

Teenagers reached by the Gospel

People of all ages came forward in response to the invitation to accept Christ on Saturday night, including three Filipino teenagers.

Jerlynn Mary and two of her friends rededicated their lives to Christ after hearing Will’s message about not wasting the time God gives us.

The girls nodded along as Will explained, “Time is the greatest natural resource you and I have. … It’s the most precious commodity in the whole world.”

Across the park, many could breathe out and see a cloud form in the cold air. Will compared the cloud’s short appearance to the brevity of one’s life.

The message resonated with Jerlynn. She’s about to start working toward her college diploma in the next few months, but reflected on how she’s spent her time in the past.

“My mom would always remind me there’s other things you can spend your time on instead of lying in bed or being on your phone, but I never really understood it until Will [said] … in just a minute, or in just that second it could just go away,” 18-year-old Jerilynn said.

“I realize I need to find purpose in life and find better things to do than just what my life so far has been.”

At the front, the girls met with a prayer volunteer—ironically one of their former high school teachers.

The group hugged, cherishing the moment in time and eagerly anticipating this new chapter of their lives.

A word from God

Tucked away every day of the Celebration under a blue and yellow tent, members of the prayer team interceded before, during and after the event.

“It’s great to see God’s testimony,” said Prayer Team Coordinator Peter Young. “Prayer is the foundation for what you saw this weekend.”

“On Thursday, Kalgoorlie had two earthquakes. One was a 2.6 [magnitude] and the other was a 2.8,” Lahr said.

The next day, she received a call from a prayer warrior in Perth who’d been seeking God about the Celebration.

“She didn’t know about the earthquake but said she was led to Haggai 2:6-9,” Lahr said, noting that Haggai 2:6 and Haggai 2:8 not only coincide with the magnitude of the earthquakes, but speak to Kalgoorlie’s emphasis on gold mining.

Young and Lahr gave a big smile in awe of how God showed His hand.

“You’re going to begin to see things happen in this place,” Lahr said.

Do you know where you’ll spend eternity? Don’t waste any time. Start a relationship with Christ today.

>> View photos from the Celebration 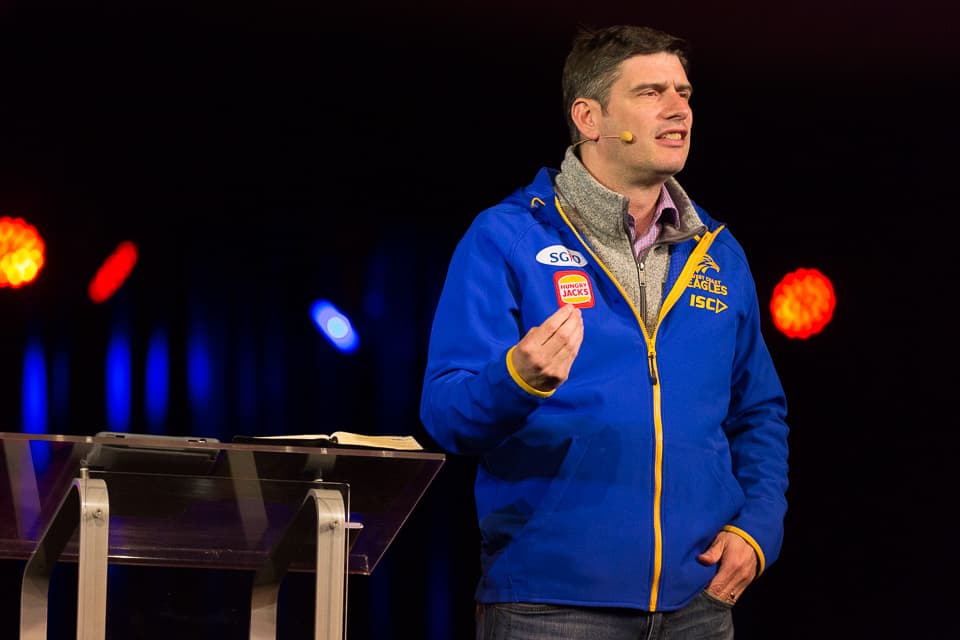