In the early 1970s, our church would hold mass baptisms at Corona Del Mar Beach, at a little spot that was just perfect, called Pirate’s Cove. It was a natural amphitheater, and people would gather on the rocky overlook above and watch their friends and family members get baptized in the clear, blue waters of the Pacific, off the California coast. I myself was baptized in this spot and loved to attend these events that would draw up to 1,000 people per baptism. The Jesus Movement, a genuine American revival, was in full swing, and these baptisms were featured on the covers of news magazines around the world. 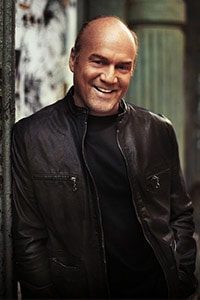 Greg Laurie is senior pastor of Harvest Christian Fellowship in Riverside and Irvine, Calif., and the leader of the Harvest Crusades.

Corona Del Mar was a familiar beach; I used to go there as a kid in high school. I remember waiting in line at the snack bar in the warm summer sun one day and hearing a man dressed head to toe in black, with a wide-brimmed hat to match, preaching to anyone who would listen. I stood there in my board shorts and T-shirt watching him scream and sweat, and I thought to myself, Why would anyone do this? I could never have imagined that at this very beach I would soon be called by the Lord to effectively do the same thing.

I arrived at Pirate’s Cove one day for the baptism, but I had my times wrong and missed it altogether. Disappointed, I walked along the beach to see if any of my friends were around, and I came upon a small group of Christians who were sitting in a circle, singing some of the songs we sang at church. Taking my place among them, I sang along. I noticed there was no real leader. I had read something that morning from Scripture and, after one of the songs ended, I began with a quivering voice to share what I felt God had placed on my heart. After I was done, I was relieved and shot up a quick prayer of thanks to the Lord for opening that little door of opportunity.

But the Lord was just getting started. I have found that He tends to lead us one step at a time. If we take the first step of obedience, He will then show us what the next step is.

I had not noticed, but while I gave my “mini-sermon,” a couple of girls had joined us. Assuming I was the leader, since I had briefly spoken, they asked one of the Christians in the circle if I might baptize them. Someone leaned over to me and said, “Pastor, could you baptize these girls?” I nearly jumped out of my skin.

“Pastor? Me?” I quickly corrected the person and told them I was not a pastor. But they persisted; would I baptize these girls? I sensed the Lord speaking to me and telling me to do it. So I confidently announced to the group, “These two girls want to be baptized, so let’s go over to Pirate’s Cove!” We all stood up and began to walk over, and now with about 30 people in tow, I thought, What on earth am I doing here?

But I couldn’t back out now. We arrived at our destination and I took the two girls out into the water, while the other believers stood on shore watching. It suddenly dawned on me that I had never really observed the technique of baptizing a person. I could not remember exactly what should be done. I fumbled my way through it, baptizing them in the name of the Father, Son and Holy Spirit. That part I remembered.

“I have found that He tends to lead us one step at a time. If we take the first step of obedience, He will then show us what the next step is.”
—Greg Laurie

I was feeling quite euphoric at this point. I prayed, “Father, thank You for this wonderful opportunity! I’m so glad I responded to Your prompting!”

But the Lord had even more in store for me on that sunny Southern California day.

A small crowd had gathered up on the rocks to watch our activities. As clear as day, God spoke to my heart and said, “Preach the Gospel!” This is what I had always feared when I started sharing my faith—that the Lord would nudge me to preach. I simply was not interested. My mind raced back to the sweating preacher, dressed head to toe in black, whom I had seen as a boy on this very beach, and how I never wanted to be that guy. And now … I was.

At the same time, I had a boldness and power I had never known before—a power equal to the task. So for the first time in my life, I voluntarily began to speak. I don’t recall exactly what I said, but it was something along the lines of, “Maybe you are wondering what we are doing down here, baptizing these people. These girls have put their faith in Jesus Christ, who died on the cross for your sin …”

This was not as hard as I thought it would be. In fact, I was even enjoying it. But what I said next surprised even me. Without missing a beat, raising my voice a bit louder so as to be heard, I said to the people watching, “If you would like to ask Jesus Christ to come into your life, come down to this beach here and I will pray with you and baptize you too!” It’s almost as though I stepped outside of myself for a moment. I thought, Greg, what on earth do you think you are doing? You are not a preacher. What, do you think you’re Billy Graham?

All these thoughts rushed through my mind as I was wrapping up my little evangelistic talk. And sure enough, people came—down the stairs, right to where I was standing. I prayed with a couple more people to accept Christ and proceeded to baptize them as well.

The whole scene was like a sneak preview of things to happen later in my life. In time, I would be a pastor and an evangelist, speaking in arenas and stadiums and calling people to Christ, just like Billy Graham did. This was not to happen for a few more years, but I knew now there was no turning back. In many ways, that particular day was a prototype of what I have spent the last 40 years of my life doing—teaching the Bible as I did with the group on the beach and preaching the Gospel as I did at Pirate’s Cove.

I only tell this story to give you a heads-up about what may be in your future if you start telling others about your faith in Jesus Christ. You may not necessarily be teaching Bible studies and preaching and baptizing people. That is a calling that must come from the Lord. But I believe you will find yourself—dare I say it?—“addicted” to serving God.

You will find the joy and happiness of serving others and helping them come to Christ and grow in their faith.

Adapted from Tell Someone: You Can Share the Good News by Greg Laurie, ©2016 B&H Publishing Group. Used by permission.