Q: What happened at the 1949 “Canvas Cathedral” each night after services ended?

A: A “night watchman” took over to talk and pray with people who wandered in overnight.

When Billy Graham came to Los Angeles for a series of evangelistic meetings that wound up making headlines around the world, thousands of people flocked to a huge, white tent known as the “Canvas Cathedral” to hear the Gospel, and countless lives were changed.

While many people responded publicly to the altar call each evening, others held back, sometimes returning to the tent in the middle of the night.

A Nov. 5, 1949 article in the Los Angeles Times told the story of Rev. Eddie Garver, a young pastor from California’s Yucca Valley.

To help take care of the nighttime visitors, Rev. Garver took leave from his church in the desert, about 120 miles east of Los Angeles, and applied for the job of night watchman.

“Above the rustle of the tent flaps and intermittent sounds of traffic, Eddie heard the shuffling of feet in the sawdust, sobs in the darkness,” the Los Angeles Times article read.

“Their stories were usually the same,” the article went on. “‘I can’t sleep. I’ve been tossing and turning. My conscience aches. I need somebody to pray with me.’ And there was Eddie, a shepherd for the lost lambs.”

It appears as though Billy Graham heard about Rev. Garver and read the article in the Times. According to Mr. Graham’s longtime secretary, Stephanie Wills, his handwriting can be seen in red ink at the top of the 1949 article.

“Accepted by Reader’s Digest as human interest story,” he scrawled across the top of the clipping, which is now part of Wheaton College’s Billy Graham Center Archives.

The article said each nighttime visitor had “the same sleepless desire: to accept Christ because he can no longer resist.”

Thanks to the way God used Rev. Garver, the sleepless wanderers who found themselves inside the tent had the chance to pray about whatever was keeping them up.

And they didn’t have to do it alone.

Are you ready to accept Christ? You don’t have to do it alone, either.
Make your decision now, or chat with one of our trained online coaches. 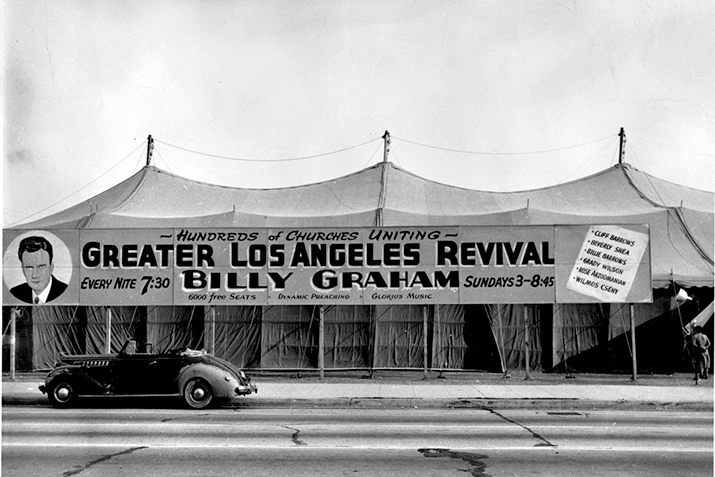