From his Arlington, Va., home, Brit Hume can look out over the Potomac River and see the city of Washington, D.C., where he spent so many years covering the White House for ABC News. On a clear day, he can peer through binoculars to the apartment building off Connecticut Avenue where he spent his boyhood.

I was a street kid as a teenager,” he says. “My buddies and I played sports, loved cars, dated girls, drank beer and spent time at the beaches in Maryland and Delaware whenever we could.”

Hume sees the world so differently now. A trusted journalist for five decades, he has made a name for himself as a tough-minded straight shooter. And in his current role as senior political analyst for Fox News, he has more freedom to share his views than he did as a reporter at ABC News.

On July 20, he looked into the camera on Special Report and responded to the controversy surrounding Planned Parenthood’s trafficking of fetal body parts with these words—unusually gutsy verbiage for broadcast news:

“Abortion involves the extraction and killing of a human life, which within a couple of weeks of pregnancy has a beating heart. Five weeks in, its hands and legs begin to grow. It is these tiny creatures, and too often ones that are far more developed, that are pulled from a mother’s womb and crushed with forceps.”

Hume barely blinked, his terse voice gushing unfiltered from his throat. “This gruesome procedure shows the extent to which we as a people have been anesthetized by the estimated 55 million—55 million—abortions performed since the Supreme Court ‘discovered’ a constitutional right to that procedure 42 years ago.”

Hume is definitely “out” as a Christian. In 2010, he ruffled feathers when he suggested during a panel discussion that the troubled Tiger Woods should consider Christianity as a way back to his family after an affair.

“We were doing a segment on predictions, and the question was would Tiger Woods make a comeback as a golfer,” Hume says. “And it occurred to me that perhaps he would come to Jesus. And I thought, If Tiger Woods, with the influence he has, were to come to Christ, that it would be an extraordinary event. First of all, it would have a profoundly favorable effect on his life. And it would be an example to the world. And that would be a wonderful thing.”

He received a letter of praise from former President George H.W. Bush but was sharply criticized by media commentators. “The question became was I going to take it back, and I wasn’t going to do that.”

Born in 1943, Hume graduated from the University of Virginia in 1965 with a degree in English. He “stumbled into a newsroom” straight out of college, for no other reason than he needed a job.

“I didn’t have any great career drive or any strong imagination about what I wanted to do,” he says. “I didn’t really think I wanted to be a journalist.” One moment in the noisy, cacophonous atmosphere of the Hartford Times newsroom and he was smitten.

“I thought, This is the coolest place I’ve ever been,” he says. “I loved it from that first day. And I’ve really never been anything but a reporter, or now a commentator.”

From the Hartford Times, Hume jumped to United Press International and later reported for the Baltimore Evening Sun. He gained national attention when he broke a story for columnist Jack Anderson about International Telephone and Telegraph (ITT) being cleared of government antitrust violations in exchange for contributions to the 1972 Republican National Convention. That led to a job offer as a consultant with ABC News, where he later met Kim Schiller, a young producer who grew up in Washington state and had come to work as a producer for Good Morning America. The two worked together for two decades and eventually married, in 1993. 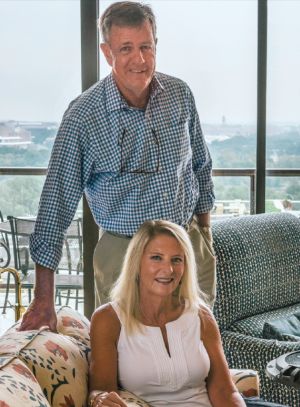 Brit and Kim Hume at their home in Arlington, VA.

During his years with ABC News, Hume contributed to World News Tonight With Peter Jennings, Nightline and This Week. He received numerous awards, including a 1991 Emmy for his coverage of the Gulf War and was named the Best in the Business by the American Journalism Review for his extensive news coverage of the White House.

In 1996, Hume moved to Fox News, and in 1998, a personal tragedy changed his life. On a Monday morning in February, he was in his office when he received the news that his son, Alexander Britton “Sandy” Hume Jr., had taken his life.

Sandy, 26, was a reporter for The Hill newspaper in Washington, D.C. He had been charged the previous night with drinking while impaired, and after his release, he returned home and shot himself.

“I was staggered by his loss,” Hume says. “It’s like something is amputated from you that is never going to be back. There’s a sense of darkness that comes over you about life and the world. It’s as if nighttime descends on your heart, and you just have to get through it.”

Hume’s thoughts turned immediately to God. As a boy, he’d gone to chapel at St. Albans every morning. He’d attended church with his family at St. Margaret’s, which was up the street and around the corner from his home off Connecticut Avenue. And as an adult, he had continued to go to church with his wife, Kim, who had come to Christ at age 26, after a 12-year battle with alcohol.

Suddenly, in the midst of his overwhelming loss, he sensed God with him.

“I felt like He would help me with my grief and pain,” he says. “In fact, I had this peculiar feeling during that time that the phone was going to ring and I would pick it up and a voice on the other end would say, ‘Brit, this is God, and this is what this whole tragic development is all about.’”

And the outpouring of sympathy that he received once he returned to Special Report after Sandy’s funeral seemed to confirm that God would take care of him.

“We had been on the air less than a year,” Hume says. “And my mailbox every night was stuffed to overflowing with cards and letters. I read every one of them. I wept over some of them. I smiled at some of them. I felt this powerful sense of gratitude about it.”

Hume’s fellow broadcaster Fred Barnes had come to Christ several years prior. He had gently urged Hume to do the same and had given him a copy of Malcolm Muggeridge’s book Jesus Rediscovered. At Sandy’s death, Barnes introduced Hume to Jerry Leachman, a former football player for Bear Bryant at the University of Alabama. Leachman was a minister, and as Hume started meeting with him, Leachman began to teach him about the centrality of Christ.

“The next thing you know we had formed a journalists’ Bible study group, and out of that grew a monthly home church where we still meet with husbands and wives. Jerry and Holly Leachman come and we study the Bible together. All of that has grown out of the experience with my son’s death, and it has brought me back to Christ.”

One of Brit’s greatest mentors is his wife. Kim was the second of four siblings born to alcoholic parents. She started drinking at age 14, and she hit rock bottom at age 26, when she woke up one Saturday morning too sick to go to work and feared she would lose her job.

“All of that has grown out of the experience with my son’s death, and it has brought me back to Christ.”

She didn’t lose the job, but over the next few days she sank into such darkness that one night she asked God to take her life.

“I asked God to please kill me. I said, ‘I can’t do this anymore, and I don’t see any way out, and would You just please, please, please take me?’ And the message that I got back was, ‘No.’”

Heeding God’s answer, she surrendered her life to Christ and with His help stopped drinking and white-knuckled her way through detox.

Kim describes her husband as a truth teller, a man who keeps his word, is kind to people of lesser rank, and is quietly generous to charity and to his friends and family.

“Brit’s knowledge, institutional memory and extensive experience come through in every word he speaks,” she says. “He is calm, trustworthy and makes sense. He doesn’t jump on any bandwagon, and he is most of all fair. As a commentator and panelist, he has some leeway to express his own opinions, but they are always fact-based and fair.”

When Kim retired as Fox News vice president and chief of the Washington Bureau in 2007, she and Brit decided to spend a year reading through the Bible. When they finished, she continued to read. She loves the little nuggets of inspiration God gives her in her quiet moments with Him, so much that she started her own personal blog at kimhume.blogspot.com, so she could share them and continue her public profession of her faith in Jesus Christ.

Brit serves on the board of a Christian youth home in Virginia that was founded by former Washington Redskins coach Joe Gibbs and donates his lecture earnings to that organization.

“I try to reflect Christ in my approach to every person I see or deal with in any way,” Brit says. “What I’m seeking to do as a journalist is to be fair and impartial and accurate in the work that I do. And those values, it seems to me, are totally consonant with Christianity.” D 2015 BGEA