This May, the Billy Graham Evangelistic Association will hold the World Summit in Defense of Persecuted Christians, where hundreds of church leaders, victims of persecution and others will meet to talk and advocate change regarding the recent, unprecedented persecution of Christians throughout the world. Leading up to the Summit, we will be sharing stories from Christ followers who have been persecuted for their decision to follow Jesus. Join us now for a look into the life of Iraqi Christians:

The steel barrel of the gun pressed into Father Douglas Al Bazi’s head. His captors pulled the trigger.

Another empty chamber. Another psychological brush with death during a harrowing nine days of torture for the Iraqi Chaldean Catholic priest. That was 2006, and while Fr. Bazi talks openly now about the brutal kidnapping, there was a time when he was reluctant.

Who was he to complain?

In a country where nursing mothers pray their newborns will grow up, be happy and die normally—that is not be shot and killed—he has seen his fellow Iraqi Christians endure extreme persecution. Parents too often outlive their children, and according to a 2016 estimate, just 7 percent of the population celebrated a 55th birthday.

As far as Fr. Bazi is concerned, his story is not more important than the one of his people. Plus, he never forgets he chose this life, or maybe it chose him. He dreamed of being a pilot as a boy, a dream that fondly takes him back to his childhood even today, but he felt such a strong call to the ministry that he started attending seminary much to his parents’ dismay. The call to serve God drowned out even the warnings his teachers issued. This life, they cautioned him, wouldn’t just be challenging. It would likely be a suicide mission.

“At the end of the day, with all that suffer, who am I to complain to God?” Fr. Bazi asked in his soft-spoken, resolute way. “What should I tell Him? ‘I’m suffering’? He will say, ‘Yeah, I sent My Son to you and He suffered by your sin.’ What should I say, ‘They’re going to kill me?’ He’s going to say, ‘Yeah, they killed My Son, too.’ So we don’t have right to complain at all. We have the only thing to be grateful.” 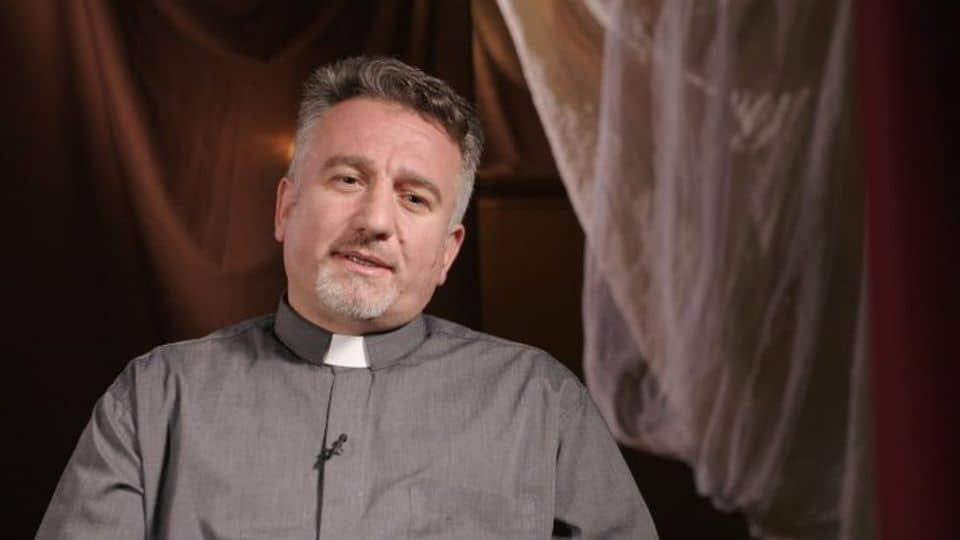 Father Douglas Al Bazi doesn’t just want his story told. He also wants to share the story, the suffering, of his people in Iraq. He appreciates prayers for his people. “Don’t think your prayer is just words,” he said. “Your prayer actually makes my people, they are not feeling alone. And it’s important. It’s really important when we are doing the suffering, when we feel that we’re alone. It’s really hard, but when we feel that we are not alone, we can defeat that suffering.”

Fr. Bazi also firmly believes Christians have a responsibility to show everyone, even those who practice evil against them, the true light of Jesus.

“We have to not just pray for them, but to give them advice,” he said. “We have to show them what is the right way. … I just want to invite them to be human. Go back to the humanity you have in your heart.”

Iraq’s population numbers some 38.6 million people, and 230,000 of them call themselves Christians. In its 2016 report, global watchdog Open Doors stated these Christians are on the verge of extinction thanks largely to radical Islamic movements, non-Christian leaders and authorities. Non-Christian families also self-police. Some aren’t hesitant to persecute or even kill relatives who start to follow Jesus.

“When I was in Baghdad, the city I’m in love with forever, day by day, you can feel that Baghdad became city of shadow of death,” Fr. Bazi said. “I know you feel the devil is standing every corner. People change, people leave.”

Fr. Bazi worked for a church in the Iraq capitol of Baghdad about a decade ago. There, his church was a routine target of persecution. He heard the sound of rockets exploding around the building during service. He survived a bombing and later, a shooting. Both happened at his church. He still remembers the feeling of flying through the air from the blast and the hot feeling after an AK-47 round pierced his leg.

But while Fr. Bazi survived such attacks, he has had friends who did not. The religious persecution is so widespread, priests are encouraged to exchange wills so their final wishes can be carried out in the event of their death.

“We [priests] are not crazy people,” Fr. Bazi said. “We like our life. We are not going to kill ourselves. But actually what’s pushing us to go ahead is that love, that call from God.”

Reports state half a million people fled, and Fr. Bazi said his church in Erbil received 17,000 families who hastily deployed east to safety. His church greeted the displaced individuals, seeing them as Iraqi relatives rather than refugees, and set up centers to provide them with more than a temporary shelter. This became home for awhile.

“I learned a lot from my people. I was looking to my people, to what happened to them with the eyes of, you know, feeling sorry. But they were telling me, Father don’t feel sorry. You have to appreciate that we are still alive. We can still thank God.” 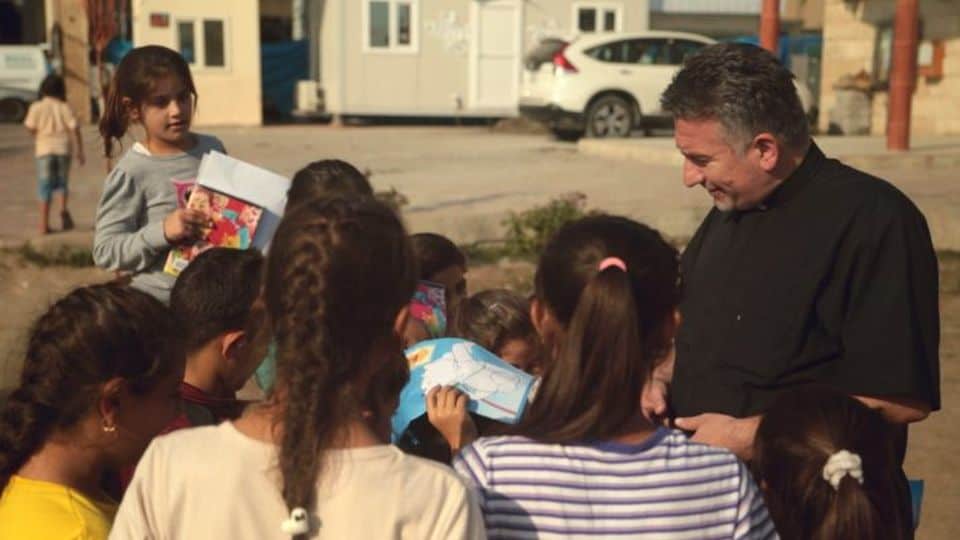 Father Bazi visits with children at a center in Iraq. Most of the centers have closed now, but families still stay in touch with Bazi, who currently is serving in New Zealand.

Today, only a handful of temporary centers remain from the 26 originally established. Many of the people have been relocated, but quite a few stay in contact with Fr. Bazi through Facebook. They don’t thank him for what he and his church did; they tell him they miss his smile.

“We were showing how we can support each other. Doesn’t matter if it was plate of food, plate of medicine, but this is Christianity,” Fr. Bazi said. “We can survive on just one condition—never give up. Never give up. We will never give up.”

‘Alive for a Reason’

Fr. Bazi never cried out when his captors tortured him. He never screamed, and he never pleaded for his life, even when negotiations seemed to go south on the sixth day. That day, Fr. Bazi spoke a brief word with the negotiating priest in Aramaic. The priest, a friend, understood Fr. Bazi’s message and gave the captors permission to martyr Fr. Bazi. That day, the captors started angrily breaking Fr. Bazi’s bones with a hammer. They also used the tool to knock out his teeth. One captor chillingly told him, “You have many teeth. And we have all the night.”

His captors were annoyed and sometimes mystified by him, especially when he refused water after it had been withheld during his first four days of imprisonment. His parched body seared in the arid climate, but Fr. Bazi drew from a deeper strength. His prayer life intensified into short, deep bursts. He dreamed about his family and drinking water during the little sleep he had.

At the same time, he was developing an odd relationship with his captors. During the day, he was a spiritual adviser who answered their questions. At night, he was a prisoner. They tortured him with the 24/7 AlQuran channel blasting in the background to give off the presence of piety and to mask his screams that never came.

“The day came, they came with asking for forgiveness,” Fr. Bazi said.

Fr. Bazi didn’t expect to leave the prison alive. He only asked that they let his people know he was dead. But on the ninth day, his captors unloaded him after a ransom was paid. The entire episode, etched forever in his mind, still feels like an out-of-body experience. 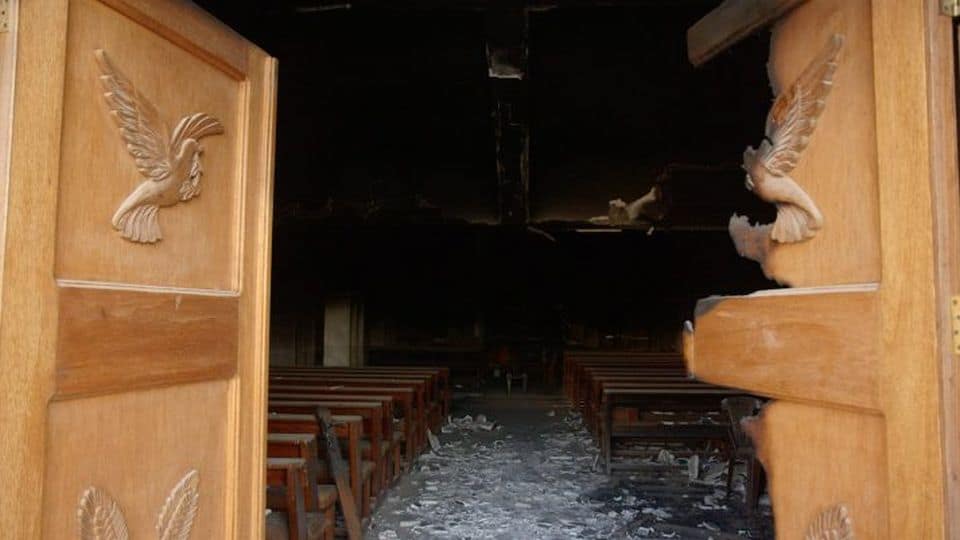 This Iraqi church wears the scars of persecution after being bombed. Bazi notes that, “what’s happening in Iraq is completely genocide” against Christians.

There is a hunger for Jesus in Iraq. Over the years, more than 230,000 Iraqis have visited the Billy Graham Evangelistic Association’s PeaceWithGod.net website—an interactive site that explains the Gospel—and indicated decisions for Jesus Christ. Fr. Bazi also has seen the hunger in person, particularly within groups appalled by the grotesque practices of their own religions. But Fr. Bazi offers a deliberate word for anybody interested in making a change.

What is the cost of being a Christian in Iraq? Fr. Bazi took a deep breath and exhaled. 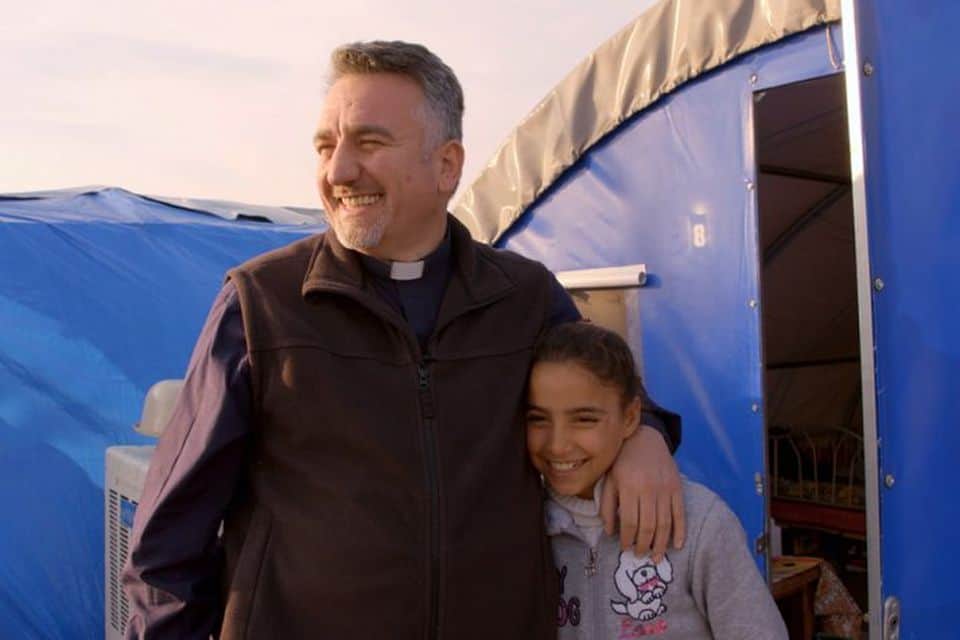 Father Bazi is looking forward to attending the World Summit in Defense of Persecuted Christians this May. “To be there is really important to myself and to my people as well,” he said. “I’m grateful to share our testimony together, to be in union in the same body of Jesus Christ.”

Islam, this fast-spreading religion Fr. Bazi says does not work anymore, doesn’t just threaten his people. He urges his Christian brothers and sisters in America to “wake up and take action.”

However, Fr. Bazi is unflinching, even in the face of anticipated persecution. He shares a story about sheep and wolves to highlight the issue. Sheep aren’t as powerful or as intimidating as wolves, but they are more valuable given their utility. Iraqi Christians, despite their dwindling numbers, reflect that value.

“So we (Iraqi Christians) are still alive; we still have value even if we are weak. So this is the story of my people. So if they want to persecute us, the hour will come. But in the end, in the end we are going to win the war. Win the battles? Yeah, we lose a lot of battles. Never mind. But we are still sons and daughters of that Lamb of God.”

Would you join us in praying for Father Bazi, his people and those who face persecution all over the world?