Safe in the arms of Jesus.

That was the song playing over the speakers in Charlotte, N.C.’s Calvary Church on the morning of Nov. 22. It was a recording sung by Cliff Barrows’ decades-long friend and colleague, the late George Beverly Shea.

After a 93-year, praise-filled journey on earth, Cliff Barrows is at his heavenly home—safe in the arms of Jesus. He passed away Nov. 15, leaving behind his loving wife of more than 20 years, Ann; five children: Bonnie, Bob, Betty Ruth, Bud and Bill; and many other beloved family members and friends. His first wife, Billie, preceded him in death in 1994 after a battle with cancer.

5 Reflections on the Life of Cliff Barrows

Cliff Barrows was born to Charles and Harriet Barrows on April 6, 1923, in Ceres, Calif. He gave his life to Christ as a young boy, and his early adolescence was marked by a call to ministry. Raised on a citrus farm, he learned the value of hard work.

But when he arrived in South Carolina to attend Bob Jones University, he came with more than a strong work ethic and a call to ministry—he had countless hymns written on his heart and a passion for music.

Barrows’ mother was the influence behind his affinity for hymns. When he was a young boy, she encouraged him to memorize these songs—not just for the melodies; but so these God-glorifying words would be etched on his heart. There was deep theology in the lyrics, and it largely shaped who he became—not only as a minister, but as an individual.
Barrows’ college experience was paramount in shaping him as a minister of the Gospel and as a disciple of Christ. He graduated from Bob Jones with a degree in sacred music, and he also studied Shakespearean drama. It was there he developed his program planning skills, which made him the prolific choir director on the platform of the Billy Graham Crusades.

More important, Scripture memorization was drilled into him. This would prove to be one of the hallmarks of his character—even until his last day on earth.

The year 1945 proved to be pivotal for Cliff Barrows. First, he married his college sweetheart, Billie, and while honeymooning in the North Carolina mountains, they met Billy Graham—the man with whom Cliff would travel the globe over the coming decades, sharing the hope of the Gospel through preaching, Scripture—and of course, song. 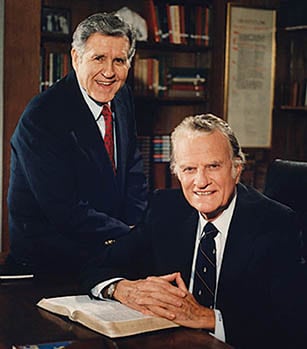 Billy Graham was in the mountain town of Asheville to preach at a Youth for Christ rally, but he had a big problem—his song leader didn’t show up. And in God’s providence, Cliff Barrows was in town with his new bride and offered to fill in.

Not knowing whether his soon-to-be friend and ministry partner was up to the task, Graham grabbed both of Barrows’ hands and said, “No time to be choosy!”

As it turned out, it was a match made in Heaven. Barrows, a preacher in his own right, humbly gave up the opportunity to launch his own ministry in order to serve alongside Billy Graham. For more than six decades he led countless choirs all over the globe, hosted the long-running BGEA radio program The Hour of Decision, served as the Crusade program director, and had roles in several BGEA films.

“Cliff was many things to my father: a partner in ministry, a prayer warrior, and adviser,” wrote Franklin Graham, in a letter read at Barrows’ memorial. “He trusted Cliff Barrows. He was a man of great integrity and they enjoyed a lifetime friendship.”

One of the Hallmarks of Barrow’s character—and subsequently, his reputation—was his humble posture toward serving the Lord and encouraging anyone whom he encountered. 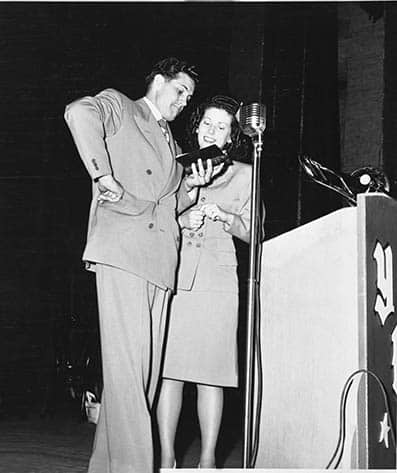 Cliff and Billie Barrows in the mid-1940s.

Billy Graham once said of his close friend: “When I would begin the invitation and Cliff would lead in singing Just As I Am, he was just as much a part of what the Holy Spirit was doing in people’s hearts. I love this man who has been like a brother to me. But all of that talent is not the secret of Cliff’s effectiveness. It is his humility and his willingness to be a servant. It is his love of Christ that monopolizes his heart, which springs from his devotional life and his daily walk with his Savior.”

It is clear to many, however, that Barrows brought more than humility and sound theology to the platform; he brought vision and excellence.

“Cliff Barrows had the tremendous vision for assembling great evangelistic choirs that have become legendary,” Franklin said. “No one else worked with 700-800 church choirs from one city to assemble 3,000-4,000 voices. He successfully brought harmony in song and in spirit.”

“Music reaches a man’s soul quicker than the spoken word,” Barrows once said in an interview. “Martin Luther said, ‘Next to the Word of God, music deserves the highest praise.’”

Barrows was known for his gift of orchestrating a symphony of praise through unskilled, untrained voices. Once called a “choir wrangler” by a reporter, he said, “I’d rather have 100 volunteers than 200 paid professionals, because you have their hearts, and their spirits are riveted to the commitment of serving the Lord through the message of song.”

One of those choir volunteers was C.L. Handy, who now volunteers at the Billy Graham Library.

“I sang in the choir in the last Crusade Mr. Graham and the team held in Charlotte,” wrote Handy on Barrows’ memorial website. “He was like the sun on a warm day. He never stopped smiling and exuded joy. He could bring those [together] who wanted to lift their voices to Jesus, but [who] had little musical abilities … yet made something so beautiful as a gift in music to Jesus. He could form a choir out of any group and it was perfect, because he dedicated himself entirely to Jesus and bringing the Gospel.” 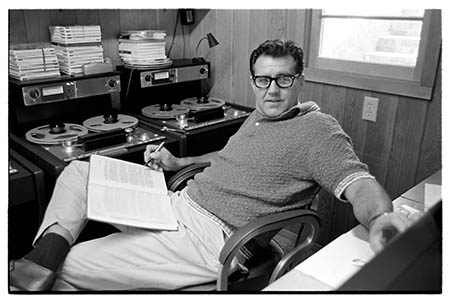 When Barrows wrapped up his Crusade appearances in the early 2000s, he poured himself into another ministry project during the winter of his life—this time, in Asheville, N.C., where his journey with Billy Graham began.

Barrows led The Billy Graham Training Center at The Cove’s first SeniorCelebration—an event geared toward senior adults, which started in 2004. It featured Barrows as the Bible teacher and song leader. He continued to host and lead singing for these events until 2014.

George Beverly Shea would often participate. The guests particularly enjoyed hearing Barrows and Shea tell stories about traveling the world with Billy Graham through the decades.

“Cliff’s humility only got sweeter with age,” said Michele Bachelor, program director for The Cove. “The worship would get started in the green room before the program even began. He would invite musical guests to join him in the green room, where he would sing or pray with them before the program started. He carried with him a 24/7 posture of worship. And that is the mark of a humble spirit.” ©2016 BGEA

‘With Strength for today and Hope for Tomorrow’: Letters from Cliff

Cliff Barrows’ ministry went beyond song leading from the Billy Graham Crusade platform. He also participated in TV specials, hosted the long-running Hour of Decision radio program and taught the Scriptures from time to time.

But perhaps one of the strongest—and least known—facets of his personal ministry was that of individual encouragement, often through letters.

These were thoughtful, detailed letters. He paid such close attention to the lives of others that he could easily recall specific things about the life of any given letter recipient and could speak to his or her individual situation.

More important, Barrows had a knack for filling these letters with the hope of Heaven, with the principles of Jesus woven through every word.

When he would send a letter of condolence to a bereaved friend, Barrows almost always cited 2 Corinthians 1:2-5, pointing the heartbroken to “the one who so wonderfully comforts us in our hardships and trials.”

Joni Eareckson Tada, who, in a poetic turn of events wrote a letter that was read at Barrows’ memorial service, was the recipient of the last letter he ever penned. It was dated Nov. 10, just five days before his passing.

Barrows ended this letter to Tada with some sentiments about his eternal home: “With strength for today, hope for tomorrow, and the blessed reality that we will soon be with Him.”

For Tada, knowing her special friend left his last piece of written encouragement to her “makes this letter all the more a treasure.” ©2016 BGEA

‘That I May Know Him’: Cliff Barrows’ Lifetime Commitment to Scripture

When Cliff Barrows’ mother insisted he memorize hymns as a child, the wheels were set in motion for a lifetime of hiding God’s Word in his heart. And his time at Bob Jones University solidified the commitment to Scripture memorization, since it was required of students.

While many young people might drop the memory practice once it is no longer required, it only fueled the fire for Barrows. With each passing year of his life, he fell more deeply in love with the Holy Scriptures.

Barrows was widely known not only for his ability to recall nearly any Scripture reference on command; but also for knowing many of them in multiple versions.

He was often asked how he came to have such a vast knowledge of the Bible. His answer was always, “Review, review, review.”

Not surprisingly, the Scripture that Barrows deemed his “life verse” was Philippians 3:10, which speaks of knowing God intimately—and can best be done by writing His word on our hearts:

“[For my determined purpose is] that I may know Him [that I may progressively become more deeply and intimately acquainted with Him, perceiving and recognizing and understanding the wonders of His Person more strongly and more clearly], and that I may in that same way come to know the power outflowing from His resurrection [which it exerts other believers], and that I may so share His sufferings as to be continually transformed [in spirit into His likeness even] to His death, [in the hope]” (AMP, 1987 version).

And even as he was dying, Cliff Barrows held fast to the Scriptures, clutching the thin red Bible he had carried for more than 50 years. ©2016 BGEA 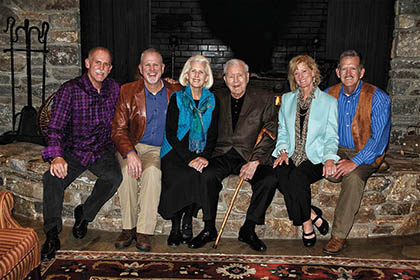 Hundreds of mourners gathered at Calvary Church in Charlotte, N.C., to celebrate the life of Cliff Barrows and corporately worship the God he lovingly served. Among them were Bonnie Thomas—the oldest of his five children with Billie, his late wife of nearly 50 years; and his second wife, Ann, whom he married in 1995 after Billie died of cancer.

At the Nov. 22 memorial service Bonnie and Ann shared some reflections on the man they loved.

“Dad was given two wonderful helpmates … my mom, Billie, who was his joy for almost 50 years,” said Bonnie. “Then, Dad was given Ann. Ann was, for him, his peace and serenity.”

“I’m so thankful that God allowed me to care for him until the last three or four days of his life,” Ann later said from the podium. “It was such a privilege and such an honor … I would do it all over again, if I could.”

Bonnie explained how the humility Barrows displayed among friends and colleagues was consistently practiced toward those who knew him best—his family: “Dad never liked people talking about him. If they started, he would always turn the spotlight back on them … and then talk about Jesus.”

Bonnie spoke of how her father wove a tapestry of Scripture as a banner over their family—and pointed to the Word of God as the final authority and the ultimate source of strength. Whether he lightheartedly bribed his children with a five-dollar bill to memorize a Psalm or comforted them with words from Isaiah when their mother was dying, Scripture was always his focus. 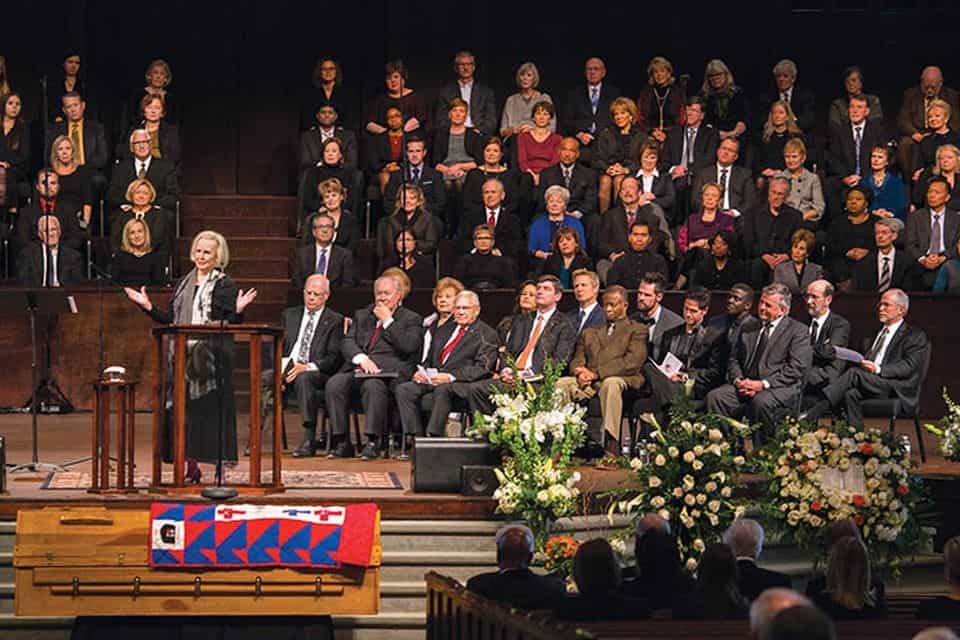