As the Death-With-Dignity movement picks up political steam, the church cannot afford to sit idly by with so much at stake. Evangelicals who wrestle with this issue, particularly since the physician-assisted suicide of Brittany Maynard in November, say Christians must stand as passionately on behalf of the terminally ill as they have for the unborn. Otherwise, human life will be further devalued, and European-style approaches to end-of-life issues could become commonplace, including the practice of non-consensual euthanasia.

That’s the bold conclusion shared by Russell D. Moore, president of the Ethics and Religious Liberty Commission of the Southern Baptist Convention; C. Ben Mitchell, a biomedical ethicist who holds the Graves chair of moral philosophy at Union University; Joni Eareckson Tada, a longtime advocate for the disabled since becoming a quadriplegic 47 years ago; and Kara Tippetts, a 38-year-old mother of four suffering from terminal breast cancer.

These leaders spoke with Decision after Maynard’s Nov. 1 passing. They voiced deep concern that America is fostering a culture of death, rather than of life.

As her seizures from terminal brain cancer increased in frequency and intensity, Maynard took matters into her own hands. Surrounded in her Oregon home by family and close friends—one of whom is a physician—she swallowed a death-inducing medication three weeks before her 30th birthday.

Oregon had become the first state to legalize doctor-assisted suicide, in 2008. Montana, Washington, Vermont and New Mexico have since followed suit.

Twelve days after Maynard’s death, the New Jersey state General Assembly passed an “Aid-in-Dying” bill, invoking Maynard’s name during the debate. But even if the state Senate passes the legislation, it faces an uncertain future as Gov. Chris Christie has spoken out against the bill.

Regardless, the movement is gaining traction, fueled largely by the public profile of Maynard, whose campaign was undergirded by the organization Compassion & Choices. Its president, Barbara Coombs Lee, characterized the 41-to-31 vote by New Jersey’s General Assembly as “our first victory in the memory and spirit of Brittany Maynard.”

That’s alarming to Mitchell. He says the church must now act decisively.

“We’re going to see more states adopt pro-assisted suicide legislation until the church wakes up on this issue as it’s been awakened on the abortion issue,” Mitchell explained. “Until we see our belief in the sanctity of human life covering both edges of life—the beginning and the end—I don’t think the situation is going to get better.”

Moore voiced a similar sentiment. “We need a theologically informed, Gospel-robust movement that is pro-life and whole life,” he said. “We must speak to the integrity and dignity of the human person from conception to natural death.”

Moore acknowledged that Maynard drew a supportive response because she presented her suffering and decision to take her life in understandable and sympathetic terms. That’s in direct contrast to Dr. Jack Kevorkian, the Michigan pathologist who championed physician-assisted suicides during the 1990s. Kevorkian died in 2011 at the age of 83, after claiming he had helped some 130 people end their lives.

“Jack Kevorkian was a creepy figure who sort of fit into the mad scientist tropes of popular culture,” Moore said. “Brittany Maynard, on the other hand, was a much more sympathetic figure. And that’s more dangerous at the level of persuasion.”

As a result of an increasingly sophisticated right-to-die movement message, combined with a cultural mood in America that is becoming morally libertarian on these issues, Moore said he dreads the prospect of an increased number of physician-assisted suicides like that of Maynard’s.

Tada was saddened by the news of Maynard’s death, especially not knowing if she had committed her life to Jesus Christ.

“Nobody enjoys watching someone else suffer,” said Tada, who became a quadriplegic after a diving accident at age 17. “No doubt Brittany was going through a number of struggles with her brain cancer. And I can appreciate Brittany’s mother’s grief, and the grief that her husband no doubt feels.”

Tada, who has lived with chronic pain and faced cancer herself, doesn’t necessarily find fault with Maynard or her family, but rather with well-organized and well-financed Death with Dignity advocates such as Compassions & Choices.

“They drove the media attention,” Tada said. “They use people like Brittany Maynard as poster children for their cause. Brittany and her family were persuaded by a strong right-to-die group to not only seek physician-assisted suicide but to go public.

“The church should take a stand against the organizations that are exploiting young people with terminal illnesses who don’t want to face suffering,” Tada added. “They’re working hard to make this a federal right across the board.” 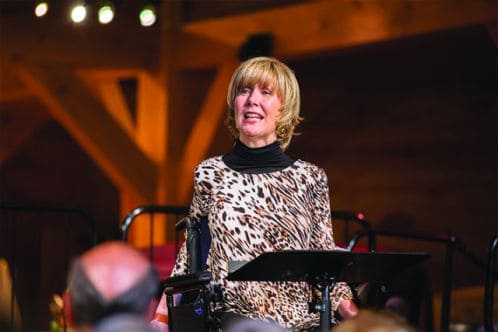 When she is hurting badly, Joni Eareckson Tada says she draws encouragement from how Jesus handled His suffering on the cross. Here she is talking to a crowd gathered for September book signing at the Billy Graham Library.

This explosive issue must be approached from a biblical perspective, Mitchell said. “Taking one’s life is not a right,” he noted. “To prematurely end one’s life usurps a prerogative that belongs to God alone. We are not the authors of our lives, and we ought not be the finishers of our lives.”

Mitchell pointed to Job 1:21-22 as one scriptural injunction against the justification of assisted suicide: “Naked I came from my mother’s womb, And naked shall I return there. The Lord gave, and the Lord has taken away; Blessed be the name of the Lord” (NIV).

She explained that there used to be in America a moral consensus that human beings were made in the image of God. She laments that’s no longer the case.

“When federal safeguards are more protective of an egg of a bald eagle than a fertilized egg of a pregnant woman, you know our society no longer believes we’re image bearers of God,” Tada said. “When you set man up as the center of his own universe, his command over his own rights becomes pre-eminent. He’s the one who dictates his own fate.”

True rights are moral claims that are based in God’s law, Tada added. “But if you take God out of the picture, rights become nothing more than people’s willful determinations.”

It’s that line of reasoning Kara Tippetts finds disconcerting, the ramifications of which are staggering, especially within the medical community.

Jason and Kara Tippetts moved from North Carolina to Colorado Springs, Colo., to plant a church in the west end of town. In 2012, Kara discovered a lump and was diagnosed with stage II breast cancer. Despite surgery, radiation and chemotherapy, it has metastasized throughout her body. Kara’s cancer is now classified as stage IV. She’s undergoing another round of chemo to try to slow down the growth rate in her spine and hips.

When Kara first heard about Brittany Maynard’s plight, she had a long talk with her own oncologist about the potential implications for him.

“He grew teary-eyed and said, ‘If I’m legislated to prescribe death, how will my patients trust me, and how will they know I am committed to their living and not their dying?’”

Kara told her oncologist she had been invited to write, via a guest blog, an open letter to Brittany Maynard. He urged her on (see sidebar on page 15). Not only did she present the claims of Jesus Christ, she expressed her concerns that Maynard’s doctor was walking away from the Hippocratic oath, which says, “First, do no harm.”

Talking with Decision prior to receiving a chemo treatment, Kara voiced a gnawing apprehension: “The Hippocratic oath has been in place for more than 2,000 years, so it’s arrogant of us to think we now know better. If we legislate death, the brokenness that will come in our relationship with our doctors will be staggering, and we’ll face a depravity in our culture that we’re not ready for.”

Kara’s spirit lifted when she shared the reaction expressed in a particular letter she received following her guest blog post. It was from a physician. “He said he had never considered my perspective that suffering and dying can be made beautiful and that as a society it’s best that we care for the broken,” she explained. “He said he was going to walk away from assisting people in suicide and hastening their death, and instead start walking with people in their suffering. Jason and I rejoiced.”

Unless similar action is taken by others—and soon—America could go the way of Europe. The right to die could morph into the duty to die. And the acceptance and practice of non-consensual euthanasia, as done in such countries as Belgium and The Netherlands, could become the norm in the U.S.

During one of his recent Breakpoint broadcasts, commentator John Stonestreet painted a dismal picture: “What started in Europe as a movement to allow the terminally ill to end their suffering has evolved into the practice of eliminating lives deemed not worth living.

Dr. Peter Saunders of the Care Not Killing Alliance says ‘In the Netherlands … dementia patients are euthanized, mobile euthanasia clinics operate and the Groningen protocol allows euthanasia for disabled babies. In Belgium, organs are harvested from euthanasia patients and 32 percent of all euthanasia deaths are without consent.’”

Not only are people’s lives at stake, Mitchell said, but the medical community’s reputation is at stake. “When healers become accomplices in killing, the trust of patients plummets,” he said. “Elderly patients will be afraid to go to their doctors or into the hospital for fear that if their life isn’t judged to be worthy of living, it will be prematurely ended by a medical community that doesn’t see that as being particularly problematic.”

That kind of power can easily be abused, Tada said. “In our broken health care system, which is so cost-containment driven, the elderly, the disabled and people with terminal illnesses or chronic conditions will feel threatened.”

The church should not wait until someone encounters a crisis to teach them about suffering, Moore noted. “We ought to be preparing people from childhood what it means to suffer rightly before God and entrust themselves to God.”

Tada, who also tried to reach out to Brittany Maynard via an open letter, said today’s secular society doesn’t know how to handle suffering. “They want to drug it, or medicate it, or surgically get rid of it, or divorce it or institutionalize it,” she said. “No, God calls us to live with it.

“We need not fear suffering,” she added. “We’re not better off dead than disabled. We can follow in the steps of Christ who set us an example as He took up His own cross. God will give us the strength and grace to bear up under the most difficult and painful of hardships—till our last breath when He calls us home.” ©2014 BGEA