“May I see your Bibles, please?”

My friend was in the book department of a major London store. Under “Religion” were books on Sufism, Yoga, Buddhism and Islam; even witchcraft.  But The Holy Bible? “No,” he was told. “We don’t stock Bibles.”

“It seems we are in darkest Britain,” was my friend’s comment.

And yet we must put on one side any shallow church talk of today about “accommodating other faiths.” In Acts 17, that was no part of the deal for the campaigning Apostle Paul and his few friends as they arrived in multifaith Athens. 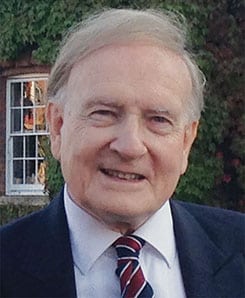 Richard Bewes is a preacher, broadcaster and hymn writer. He serves on the board of the Billy Graham Evangelistic Association in the United Kingdom and is the former rector of All Souls Church Langham Place, London.

Preaching by the mighty Parthenon—dedicated to the goddess Athena—Paul was facing an astounding and pluralistic cake mix of beliefs. There was Delphi with its Oracle; the rites of Egypt’s Isis; or Cybele, the mother of gods in Asia. Romans could go to Greece and identify Bacchus, their god of wine, with Dionysus; or Jupiter with Zeus—or visit Syria and find him in Baal.

Now Paul was speaking of Christ—appointed by God as judge of the whole world—and of His action in raising Him from the dead. The intellectuals present had only to glance at the Parthenon to consider the absurdity of what they were hearing.

Yet the Parthenon itself would one day become a church and remain so for a thousand years. Christianity held the Parthenon longer than any other religion. But more important was the power of a new thought form to overturn the astounding mix of cultures and creeds that had been fused into a towering world belief system. Far from accommodating it, the Christian preachers were bold enough to attempt a complete replacement of the existing outlook that dominated Europe.

This is our task today, for—in the West—the wheel has nearly gone full circle; we are back in Athens again, at the start of what could be called “A New Pre-Christian Era.” Today’s Christian preachers are now called, in their own turn, to present their current unbelieving generation with what must be called the novelty of the Gospel. The Epicurean and Stoic philosophers of ancient Athens had asked the Apostle Paul, “May we know what this new teaching is?” (Acts 17:19).

The saving message of Christ—very God of very God, begotten, not made, crucified at Calvary, resurrected at Easter, ascended on high; before whom the nations are as but a drop in the bucket—such a message will always come across as excitingly brand-new. Such is the power of the Bible when authentically presented to a fresh generation!

But there is also the audacity of the Gospel. We detect no apology on the part of Paul and Barnabas in Athens. Like them, today’s preacher, when standing before an untaught people, can whisper within: In the next few minutes, somebody’s life is going to be changed.

There is also the universality of the Gospel, for we too can be aligned with Paul in his declaration that God “commands all people everywhere to repent” (Acts 17:30).

Today we start from the platform of the empty aimlessness of the modern worldview, which in great measure resembles that which faced the apostles. Historians pinpoint four weaknesses in the old view.

First, it failed to produce a satisfying interpretation of life. Plato of old had insisted that every system of thought must be able to withstand an intellectual assault. The question arises today: “Does my life, as explained by my upbringing, make any sense?” Indeed, atheist Richard Dawkins’ explanation of life’s purpose as “the progress of DNA” cannot possibly survive for long.

Second, it failed to produce a credible morality. Even the heroes of Greek mythology demonstrated a higher morality than the gods! As William Barclay comments, “Chastity was the one completely new virtue which Christianity brought into the world. In the ancient world sexual relationships before and outside marriage were the normal and accepted practice. The sexual appetite was regarded as a thing to be gratified, not to be controlled.”

Historian T.R. Glover wrote, “The Christians came with a message of the highest conceivable morality. They expected a response; they preached repentance and reformation; and people did respond, they repented and lived new lives.”

Third, the old worldview failed to offer a personal faith. To the relief of the second-century Christian apologist Tatian, the “tyranny of ten thousand gods” had at last been replaced by the loving, forgiving monarchy of One. Through the apostolic preaching, millions would now exclaim of Christ, “We love Him because He first loved us.”

Fourth, it could not come up with an answer to death. Incantations were prescribed, as were charms and rituals, feasts and observances. But the fear remained. Into this arena of despair—or wishful pretence—the risen Christ was proclaimed across 58,000 miles of Roman trunk roads, with the joyful offer of resurrection and saving power.

On all four fronts, where the old world failed, the friends of Jesus succeeded.

Now look at the blazing evangelists of Korea, Brazil, East and West Africa, Singapore, India, and the exploding church in China! Indeed, even in “darkest Britain,” Bible-teaching churches have increased in membership over the last decade by some 70 percent.

Thus, although experts will talk glibly of the post-Christian era, it is more interesting than that! We are fast entering a new pre-Christian era—with all the excitements, dangers and opportunities involved—as scientism, arid atheism and the empty religious liberalism of tired Western morality finally gasp their last.  ©2016 Richard Bewes