This month I preached the Gospel at a Crusade in Hanoi, the capital of Vietnam. God did a mighty work in a city that, not so long ago, might have seemed an unlikely place.

It was a historic event because it was the first time ever that an evangelistic gathering of this kind has been held in the northern part of Vietnam. And it was historic eternally for thousands of Vietnamese people who, after hearing the Gospel, crowded forward at the invitation to give their hearts to Jesus Christ in repentance and faith—so many that at one point ushers had to remove entire sections of chairs near the front to make room. To God alone be the glory for each one of those He “has caused … to be born again to a living hope” (1 Peter 1:3, NASB).

Vietnam is still a communist nation, but so much has changed in this country over the last 30 years. Even the government’s attitude toward the church has been changing, and I believe it will continue to change in a positive way. We were warmly welcomed by high government officials, including the nation’s deputy prime minister as well as the mayor of Hanoi, and there were no restrictions placed on what I preached. 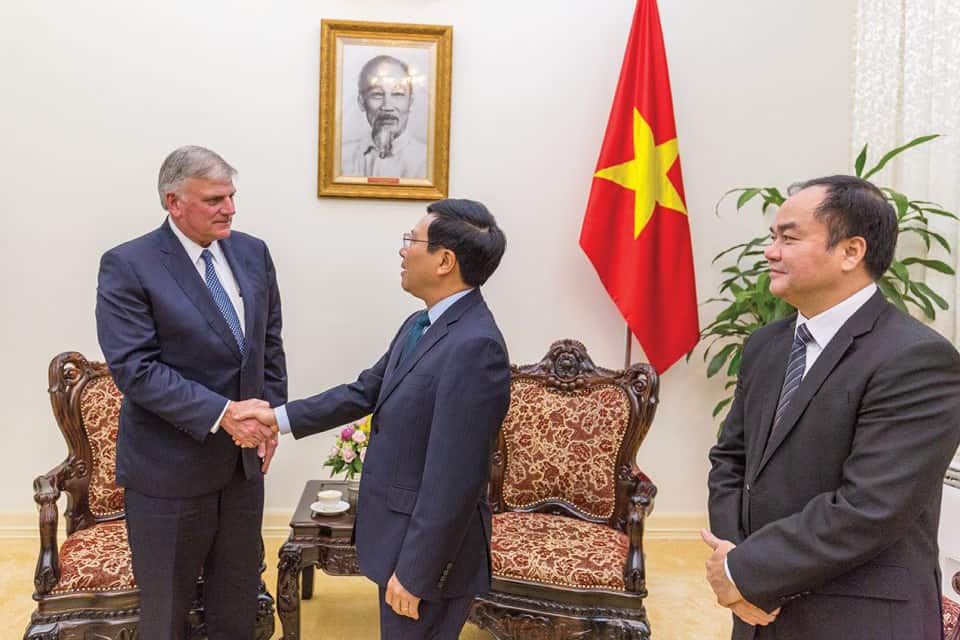 Many places in Hanoi were displaying Christmas decorations. Christmas has become a popular celebration there, complete with gift giving—even though the vast majority of people don’t know its real meaning. What a timely opportunity God provided us to share the real reason for celebrating—that God in His love gave us the greatest gift in all of human history, the gift of His son, Jesus Christ.

Christians in the region had been praying for this outreach for over a year. More than 500 churches throughout northern Vietnam, most of them small, participated in the event. A number of the churches—as well as some business owners who are believers—chartered 400 buses to bring people from outlying areas. Tens of thousands flooded the sports complex and surrounding grounds to hear the Gospel. With the indoor facility jammed to capacity each night, an even larger crowd watched on giant screens in an extended area outside.

I shared that God loves us, and I talked about the value of a soul. The Bible asks, “What will it profit a man if he gains the whole world and forfeits his soul? Or what will a man give in exchange for his soul?” (Matthew 16:26). God values a soul so highly that He sent His Son, Jesus Christ, to redeem our souls from an eternity in Hell. Jesus died on a cross so that our souls could be saved, if we would turn from our sins and accept Him by faith.

On one of the nights, two young Vietnamese men who are believers brought a friend named Tuân to hear the Gospel. When Tuân heard how sin separates us from God, both now and for eternity, he knew that he wanted his life to be different and that he wanted to be with God eternally. During the invitation he told a prayer counselor, “That’s the reason I want to accept Jesus Christ as my Savior, to be forgiven of my sins.” Tuân opened his heart in repentance and faith, becoming one of many that weekend who received God’s gift of “salvation by the forgiveness of their sins” (Luke 1:77).

One woman, advanced in years, traveled miles to get to the event, bringing two unsaved friends. One of the friends brought along her two sons. The older woman prayed throughout the evening for her friends, and God opened their hearts to hear and understand the Gospel. Both went forward to give their lives to Christ. While they were talking and praying with a counselor, the two sons sidled up to their mother to tell her they had just prayed with a different counselor nearby to receive Christ.

A younger woman named Ky had made a commitment to Christ several years ago, but knew she wasn’t living as a child of God should. “Have you been wasting your life?” she heard me ask. “Is your spirit empty?” God used those two questions to pierce her heart. She realized immediately that she needed to repent and make a U-turn in her life, receive God’s forgiveness, and begin to live like one of His children. “I don’t want to be a child who lays on the floor, sleeps, and is lazy,” she said to a counselor. “I want to be a child who serves.”

Long in advance of that weekend, at least 1,900 active believers from across northern Vietnam had completed training and signed up to serve as prayer counselors, an unexpectedly large number. It proved to be God’s provision for what He was about to do.

As the Holy Spirit worked in hearts, at least 4,500 people over two nights came forward publicly during the invitations, both inside the sports complex and outside in the extended area, to make life-changing decisions for Christ. On the second night, with people pressing into every available space at the front and more coming, a coordinator of volunteers called out in a loud voice in Vietnamese, “More counselors! More counselors!” Believers in the crowd who were trained but not scheduled to serve that night quickly stepped up to help. Many wept for joy to see what God was doing. We rejoice with them—and with the angels in heaven—for all who responded to God’s offer of salvation and new life through repentance and faith in His Son, Jesus Christ. Each new believer was given a booklet that explains how to have a deeper relationship with Jesus. Local churches are following up with the new believers.

God has brought a great harvest throughout 2017—during the year more than 1.9 million people indicated to us that they were making a decision for Christ as a result of God working through the ministry of the Billy Graham Evangelistic Association. We thank Him for every life delivered “from the domain of darkness, and transferred … to the kingdom of His beloved Son” (Colossians 1:13). This is all God’s doing—it is He alone who opens hearts and calls people to Himself.

We have a very busy year ahead in 2018, and we ask for your prayers. BGEA evangelistic events are scheduled for 39 cities in nine different countries of North America, Europe, Australia, and Asia. For the U.S., I am asking God to help us penetrate what some refer to as the “blue wall” along our nation’s West Coast. That’s the term political pundits use to describe areas of the country dominated by liberal politics such as California and the Pacific Northwest, but I’m referring to the region’s deep-rooted secularism. We’ll hold prayer rallies and share the Gospel in 17 West Coast cities. Pray with us as we plan for this strategic tour to pierce the “blue wall”—not for politics, but for the Gospel and the glory of the Lord Jesus Christ.

We thank God for friends like you who faithfully partner with us through your prayers and giving—both of those ways of helping are vital for carrying out the tasks God has given us. We are deeply grateful.

May God richly bless you,