February 21 marks the second anniversary of my father’s homegoing. My father left a legacy of global evangelism, a work that is still going strong 70 years after he and his team founded the Billy Graham Evangelistic Association in 1950. My father did not want the ministry to have his name—but the people around him insisted. They told him that his name was both known and trusted. Daddy wrote in his autobiography, “I still wish my name were not so visible. It is God’s organization, not mine, and if we ever lose sight of that fact, God will withdraw His blessing from our work.”

That statement is as true today as it was then. This is ultimately God’s work—not man’s. We want to seize every opportunity God provides to reach as many as we can with the message of salvation in Jesus Christ. The Bible says that every day the early apostles “continued teaching and proclaiming the good news that Jesus is the Messiah” (Acts 5:42, HCSB). They were driven by a love for people’s souls, and that’s what compels us to take the Gospel every place God opens the door.

Last month I asked you to pray that God would work powerfully in people’s lives on the Decision America Sunshine State Tour. Your prayers were abundantly answered as tens of thousands of people attended these evangelistic events across Florida and thousands made decisions for Jesus Christ. To God be the glory! Thank you for asking God to do a mighty work—and for your faithful giving that touches people’s lives.

We began the tour in Jacksonville Beach at the Seawalk Pavilion surrounded by sand and palm trees. A great crowd attended as I preached about the value of a soul and led people to pray for our country and our leaders. After the invitation, hundreds stood to put their faith and trust in Jesus Christ, including one young woman from Wisconsin. She was staying in Jacksonville while her brother was at the Mayo Clinic. She attended the event with a friend, and after hearing the message, she knew she wanted a relationship with the Lord.

In Plant City, a capacity crowd packed the outdoor stadium. We had the largest group of volunteers to ever serve at a Decision America Tour event, with almost 1,000 believers involved, including over 500 prayer counselors.

A counselor named Brian talked with Paul, an 84-year-old man. He attended that night with his wife, who had prayed for decades for his salvation. At the invitation, Paul was crying and said, “I could not sit still in my chair. I didn’t even want to be here. I had no intentions of being here. But my wife has been praying for me for a long time.” Paul prayed to repent of his sins and invite Jesus Christ into his life.

From there we went to Panama City Beach, a beautiful stretch of coastline that has endured hardships the last several years due to Hurricane Michael. It was the strongest hurricane to ever hit the Panhandle. One of our volunteers, who lost her home in the storm, said that the tour was a special reminder to keep pressing on and trusting God. She told us she has repeatedly encountered Billy Graham Rapid Response Team chaplains who deployed to the city to bring hope and comfort.

Key West, Florida’s southernmost point, is known for its coral reefs, legendary sunsets, and green-blue waters. It is also known for being very diverse with a large LGBTQ community. Many people asked me, “Why would you go to Key West?” I told them because I came to preach the Gospel, and this community desperately needs the hope of Jesus Christ. His Good News can “open their eyes, so that they may turn from darkness to light and from the power of Satan to God, that they may receive forgiveness of sins and a place among those who are sanctified by faith” (Acts 26:18, ESV). When it comes to the eternal destiny of souls, I don’t want to concede an inch to anybody. I want the LGBTQ community to know that Jesus Christ came to die for everyone—the Gospel is inclusive.

Local pastors told us that this event was a great encouragement to the churches there. One pastor said he could not ever remember a Christian event being held in Key West.

Key West is a place where many people go because they are running from the hard realities of life. However, there are two things we can never outrun—the love of God and the reality of our sin. 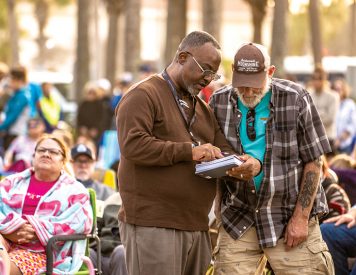 Using the story of Zacchaeus, I told them that the Lord sees everybody in the crowd. He knows them individually—and He loves them. He sent His Son Jesus Christ to die for our sins. One 27-year-old man who has struggled with a lot of health issues stood up at the invitation to accept the Lord into his life. He said he was reminded that God cares deeply about him.

Boca Raton, the city of palms, is known as one of Florida’s most luxurious retirement areas. Thousands filled the Sunset Cove Amphitheater on a picturesque Saturday afternoon. I told the crowd that Jesus said, “I am the way, and the truth, and the life. No one comes to the Father except through me” (John 14:6, ESV). John, who was struggling with the death of his 21-year-old son, attended that night. After hearing about God’s love for him, he found comfort and hope as he surrendered his life to Jesus Christ.

And on Sunday, January 19, many people filled the Hertz Arena in Fort Myers to capacity for our last stop of the tour. We praise God that hundreds of lives were changed by the power of the Gospel.

I want to thank all of the churches and individuals—including friends like you—whose involvement made this six-city tour possible. More than 1,400 churches and almost 4,000 volunteers partnered in this Gospel outreach, and we praise God for reaching men and women in Florida with the timeless truth of His Gospel. Will you pray with me for these new Christians—that they will get connected with a local church and become grounded in God’s Word?

We are looking ahead to many opportunities to share God’s love and proclaim His truth in our country and around the world. I am preparing to preach the Gospel in Saipan and Guam next week and then begin our U.K. Graham Tour in May. Please pray for the U.K. tour; several venues have said they are cancelling our contracts due to opposition from the LGBTQ community. Ask God to strengthen churches there to stand boldly for Him and to draw many non-Christians to the evangelistic events this spring.

Thank you for faithfully praying and giving to see that the Name and Word of the Lord are spread far and wide.

May God richly bless you,