Friday: The brevity of life

The clock is ticking.

It’s been two months since Billy Graham passed away, and hearts are eager for revival.

More than 2,000 gathered in an old civic center that sits along the green rolling hills of the Appalachian Mountains for the first night of Will Graham’s Tri-Cities Region Celebration in Johnson City, Tennessee, on Friday, April 27.

Just an hour west of the Asheville, North Carolina, mountains where Will Graham lives, the Tri-Cities area includes Kingsport, Johnson City and Bristol.

Attendees from across the region enjoyed music from several bands, along with Dove Award winner Aaron Shust, before Will Graham began to preach for the first time since his grandfather’s homegoing.

“I want to talk to you about time,” Will Graham said, mentioning how his grandfather spoke on this same topic at Will’s graduation two decades ago. Although his grandfather lived to be in his 100th year, he still sensed the brevity of time, Will shared.

“The Bible says your life is like a vapor. We need to make good use of every minute, every second of our lives.”

“You’re probably like me and say, ‘Man we’ve wasted so much, because we’ll never get it back.’”

Out in the crowd, a former gang member and drug addict, Matt, was listening closely. He had rebelled against God after growing up in church, but through several eye-opening experiences and close calls to death, he decided to give his life to God three years ago.

“I’ve been hungry to go deeper and get right with God since I left that lifestyle,” Matt said, further commenting, “I’ve wasted time when I could’ve been doing the Lord’s work.”

After Will declared, “[God] sees you as the most precious thing in this world, and He says, ‘I forgive you of your sin,” Matt went forward to rededicate his life to God.

“I’m going to follow Him all the way,” Matt said.

>> See photos from the Celebration

>> Watch video from the Celebration

“Imagine a football game with no rules.”

Will Graham stood in front of 4,000 people, talking sports to make a point. A game without rules wouldn’t make sense, he said from the center of the arena, and “wouldn’t be worth watching.”

“Now imagine your life with no rules,” he went on. It would be pointless, aimless.

Yet, he told the rapt crowd, that’s the path many people choose, deciding to run away from God’s commands and take charge of their own lives.

It was Saturday night in Johnson City, Tennessee, and thousands filled Freedom Hall Civic Center for the second night of the Tri-Cities Region Will Graham Celebration. His message on the Prodigal Son brought some to tears.

“I cried most of the time. … I knew I’d done wrong,” said Kendra, a 7th-grader at St. Paul Elementary in Virginia. Kendra came to the Celebration with several classmates, including friends Alyssa and Jasmine. All three girls hugged each other tight after deciding together to start living for Christ.

“I hope that I do better in the future than I have before,” said Alyssa. While no one is perfect, she said she wants to sin less and become more like Jesus.

Earlier in the day, a 10-year-old boy expressed that same desire. He’s attended a weekly Chinese church service since his parents came to the United States a few months back, and was ready to publicly give his life to Christ during Friday’s Celebration. His parents were hesitant at first, but let him come forward during Saturday morning’s KidzFest, an event for children to have fun and hear the Gospel.

“I want to learn more about Jesus,” he said, speaking English slowly but confidently. He said he was touched by the Scriptures that Will read and wants to get closer to God.

Like the Prodigal Son, there were many in Saturday’s crowd wish they could come back to their Father, too.

All eyes were on Will Graham Sunday night as he gave one final message in the Freedom Hall Civic Center at the Tri-Cities Region Celebration in Johnson City, Tennessee.

“Your life is broken, in pieces, and you don’t know where to begin,” Will said, sharing a story of how he had tried to fix his first car but couldn’t seem to figure out what was wrong with it.

“I am here to tell you God can change it all,” Will said.

Across the room, thousands of broken dreams and expectations silently echoed in people’s hearts.

“God can take the brokenness of your life and fix it, but you have to be willing to surrender it.”

Tears flowed from one woman’s eyes as she thought of her own shattered life. Growing up in a low-income home and abandoned by her father, she had felt the sting of imperfection from a young age.

Sunday she came to the Celebration with a heavy heart, as her son recently attempted suicide and she lost her job.

“Things just don’t stop,” she said repeatedly, shaking her head. “You need a Higher Power to help out.”

Many others realized that as well, lingering after the event was over to pray or talk with others about the Lord. Their problems still existed, but their hearts were at peace with God, beautifully broken and wholly surrendered.

Even in your brokenness, God loves you. Surrender your heart to Him today.. 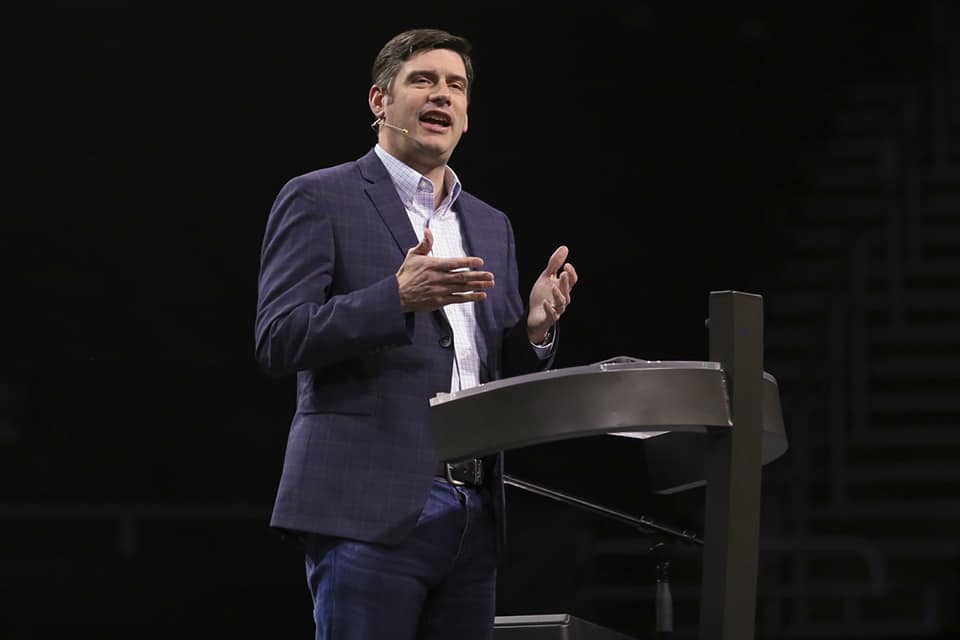