The Billy Graham Evangelistic Association of Canada recently launched an Internet-based initiative designed to gather stories of people who came to faith in Jesus Christ through our ministries. This is one of those stories.

By her own admission, Sherrie Litster admits she was “looking for love in all the wrong places”. And it took hearing about the true, faithful, unchanging love of Jesus Christ during a Billy Graham televised Crusade to turn her broken life around.

“I have been through loss, heartache and sorrow, but God always causes me to triumph in Christ Jesus,” says Sherrie, a 65-year-old resident of Abbotsford, B.C.

Sherrie grew up in a broken home. She was just 13 when her parents divorced. At that time (1962), divorce was so rare that Sherrie and her mother, Edna, felt the sting of others’ disapproval.

“I was very, very broken when the divorce happened,” she recalls.

Four years later, 17-year-old Sherrie and her friends were regularly driving from her home in Coquitlam into Vancouver to attend parties. And that’s how she met David, a bouncer at one of the clubs the group frequented. David was married and nine years older, but that didn’t stop him and Sherrie from entering into an illicit relationship.

“He was very charming and told me I was beautiful and I believed him. Basically, he was manipulating me into doing the things he wanted me to do. I was very vulnerable; I look back now and I see how my mind tricked me into choosing someone who was exactly like my father.”

Under David’s spell, Sherrie took to a lifestyle of illegal drugs, including marijuana, hashish and amphetamines. This continued when she left home in Coquitlam to attend the University of British Columbia.

“I was living with relatives in Vancouver and I was an emotional, physical and spiritual mess. I was taking amphetamines in order to attend school every day.”

This lifestyle didn’t last very long, but only because Sherrie found she was allergic to many of the drugs, developing severe headaches.

However, she remained under David’s influence, even living with him at one point; the relationship would continue through her university years and after. Eventually, Sherrie started to understand the depth of her troubles, moving into her own apartment and getting a fulltime job, but the relationship with David wasn’t finished.

“David would come to my home in the middle of the night [for sex]; he was just using me for his pleasure and I was allowing it.”

Finally, she ended the relationship in 1968.

“When a young woman doesn’t get validation from her father, it’s really hard,” Sherrie says, explaining her life at that time. “Also, there was no spiritual foundation in our home.”

By the time she broke up with David, Sherrie had already met Robert, the man she would marry in 1969. Their wedding was in a Lutheran church in New Westminster, but the newlyweds did not attend it, or any other church, afterwards.

Still, Sherrie had a hint of how much God cared for her. And that was because of her close relationship with Edna.

“Mom knew everything about me and she loved me unconditionally,” Sherrie says. “That was the first inkling I had of God’s love, because I knew I didn’t deserve my mother’s love.”

Amidst her tears, Sherrie adds, “It was such a relief to know her love was still with me.”

The guilt of her former life haunted Sherrie, even after she had a son, Jason, in 1971.

“I thought getting married and having a baby would take it away. I went through the motions, but I was numb inside. I acted like I was elated to be a mom, but started to feel depressed in the hospital.”

Jason was still an infant when he developed a life-threatening fever. In the hospital, a desperate Sherrie “prayed to a God I had never acknowledged before. I prayed He would heal Jason.”

God did just that, but only two weeks after returning home, Sherrie started to hear voices in her head declaring she didn’t deserve Jason or her husband. The voices tortured Sherri to the point where she thought of killing Jason.

“I was afraid to stay with him alone,” she remembers. “I was referred to a psychiatrist, but my fear escalated. So every time the temptation came to harm Jason in any way, I ran to his nursery, picked him up and held him close to my heart.”

One June evening, while Robert was out and she was in the midst of an anxiety attack, Sherrie flipped through TV channels and stopped when she encountered a Billy Graham Crusade.

“I’ll never forget what Billy said, that God would forgive even the most vile of sinners. I realized that was me. I bowed my knee and I knew, I knew, I knew that Jesus died for me. Then my life started to change.”

At her next psychiatric appointment, Sherrie revealed she had committed her life to Christ. The psychiatrist responded that he didn’t want her as a patient any longer.

“I remember leaving the office thinking ‘Alright Lord, it’s just you and me’.”

Sherrie started attending church and Robert went with her. Together, they became church members and met regularly with other young couples. During one meeting, Robert gave his testimony “and I was shocked because that’s when I found out Robert had made the same commitment to Christ a year after me, after watching a televised Billy Graham Crusade.”

In 1991, after 22 years of marriage and three sons, 48-year-old Robert died of a massive heart attack. Two years after that, while the family was still trying to recover, Sherrie’s mother Edna died in a car accident.

“I was so broken,” she says of that nightmarish time. “I used to go to church services and fall apart.”

But she didn’t give up on her faith in Jesus Christ. “My focus turned to God and His greatness and by doing that, I opened the door for Him to lead me. Jesus was my anchor.”

By 1993 Sherrie had met Wayne, a non-believer who has yet to accept the Lord. They were married in 1999. 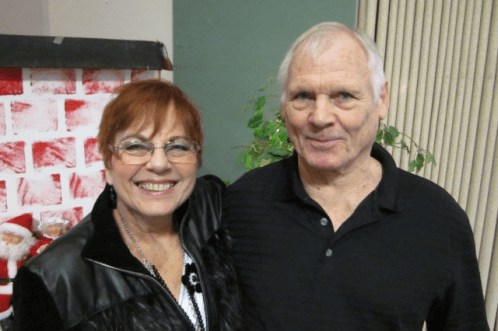 Sherrie with her husband, Wayne.

“Not once has Wayne ever forbidden me to walk the Christian walk. He’s been my greatest encourager. He comes to church with me when I sing and I’m convinced God has His hand on Wayne.”

The strength of Sherrie’s faith has impacted her friends.

“Sherrie is probably the most spiritual person I know who is willing to ‘lay it out there’ every day, in every way, to everyone,” says Jody Sorenson, who sings with Sherrie in a community choir.

“She isn’t pushy but her whole aura glows with the love of God. She lives it and willingly shares it. I really love her and depend on her for spiritual strength when I feel lost.

Sherrie still deals with a tendency to allow guilt and shame to torment her. But today, she is armed with the truth that “if the Son sets you free, you will be free indeed” (John 8:36, ESV).

“I am a life that was changed by the blood of Jesus,” Sherrie said. “I will be forever grateful to Billy Graham for his obedience to God’s calling on his life and for that Divine Appointment in 1971.”

Tell us your story of how you came to Christ through a BGEA initiative and we might share it—with your permission—on our website and in Decision magazine. Just visit BillyGraham.ca/yourstory, type out some basics, provide your contact information, and send it.