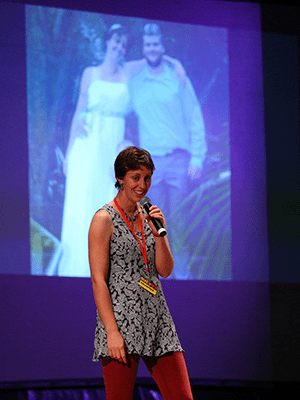 Catherine Sharpe shares her testimony at the Will Graham Reality Tour in Broken Hill, Australia, sharing how God turned her life around and restored her marriage.

“You get to that place where all of the light has been shut out, and that’s a scary place to be.”

Catherine Sharpe was in that place, traversing the darkest days of her life and contemplating a way to end it all and remove the pain. Just more than a year into a separation from her husband, and four weeks into a relocation to Orange, New South Wales, it had become too much.

“I’d gotten so bad, I was so lost, that I was contemplating taking myself out,” Catherine said. “But I couldn’t figure out how because it’s not something that you just know how to do.”

Instead she went onto Facebook and sent out a plea for prayer. People came around her and supported her. At the end of that week there was an event in town called Reality, featuring Billy Graham’s grandson Will Graham. The 2012 event was similar to the Reality Tour with Will Graham taking place this weekend in Broken Hill.

“One of my cousins was there who was able to look after my daughter Sofia so that I could listen to Will, and then a girl I’d met just that day had invited me to come along with her, so both of us made it there,” shared Catherine as she remembered back to that day two years ago.

Her whole world changed that day.

Graham’s message spoke to her, and she recognized that God loved her despite the struggles she had encountered and the pain she felt.

“It was a breath of fresh air after being trapped in this darkness for so long,” she said. “I was reminded of the unconditional love of God and the accessibility of Jesus to us. He wants us and He pursues us.

“I’ve always struggled with the concept that God wants to love us. It doesn’t make sense and it doesn’t have to make sense. It’s just who He is. That’s pretty incredible and pretty overwhelming, in a good way.”

After the meeting she went to a fast food restaurant, where Graham and his team happened to be eating. There she approached him and shared her tale of moving from suicidal thoughts to redemption, from darkness to light.

“Will was impacted by my story, which is unbelievable in itself because he’s Will Graham and I’m me,” Catherine said. “God turned my life around pretty much that night.”

She even discovered that one of the men eating with Will – a local pastor – was her cousin.

Catherine’s circumstances hadn’t changed, but her perspective and faith had.

“When my husband and I started talking again and actually trying to figure it out, we had to take it one day at a time because we’d made every mistake possible in the marriage,” she said. “Pretty much from day one, we’d just done it wrong, and we’d been fighting so hard to get it right all at once.

Though it was a struggle, Catherine and her husband reconciled their marriage.

“After six months of living day-by-day, we’d actually gotten somewhere, which is pretty cool. And then in January of 2013, we had a rededication ceremony, got all dressed up and redid our vows. Everybody cried. It was so much fun.”

And now, two years later, Catherine has come to Broken Hill to share her story with the audience at Reality 2014.

“I want the people of this community to know that there’s no escaping the love of God,” she said. “He pursues us recklessly. You can be in the darkest pit that you could possibly imagine and think it could not possibly get darker, and He will find you. He will seek you out because He wants you, because He loves you.” 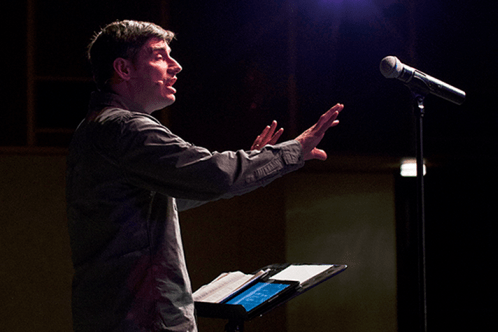 Will Graham shares about the hope in Christ at the Reality Tour in Broken Hill, Australia.