The spiritual walls of the nation have nearly crumbled, leaving but a stony trace of a fortress that once upheld the nation’s founding ideals. As He did in Nehemiah’s day, the Lord might yet extend His mercy to rebuild those walls. But only to a repenting, praying and testifying people. 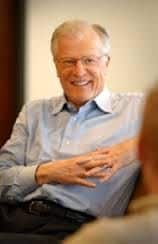 Thirty-six years ago, when I became the pastor of The Moody Church, there was a certain confidence in our freedoms and in our ability as a church body to effectively minister to our surrounding culture. Today, those freedoms are up for grabs as the ground has shifted beneath our feet. What we thought we could always depend on in America is now being washed away—the foundation is being destroyed.

Meanwhile, it appears as if the evangelical church is now considered the enemy. We are the ones standing in the way of progress. Thus, we can no longer expect the government to be sympathetic to the beneficial role of the church or to our Biblical views. Nor can we expect the courts to uphold the religious liberties we always thought would be ours as citizens of the United States.

Today, the homosexual lobby has veto power over what is shown on TV, over who is hired for certain high-profile positions, and even over the business decisions of professional sports leagues. Without question, it has exercised its muscle in imposing its values on our children and our society.

Get your own subscription, or renewal, or bless someone by giving Decision Magazine as a gift.
Subscribe Now

When the Prophet Nehemiah surveyed Jerusalem, he saw the ruins of a city destroyed by the Babylonians. And just as Jerusalem was in physical ruins, our country continues on a path of spiritual ruin. What can we learn from Nehemiah and the rebuilding of the walls of Jerusalem? What steps should we be taking to rebuild America? Here are six steps Nehemiah took to rebuild the walls that had crumbled after the previous invasion:

He began with prayer. He prayed for himself, he prayed for his nation and he even confessed the sins of the forefathers who had brought destruction to Jerusalem. In fact, he said he prayed night and day. The burden he had for his city was very clear. He knew that even though the rebuilding of the walls was a physical project, at the end of the day it was only God who would enable them to complete it. He was a desperate man seeking the Lord. We face similarly desperate times, yet the church has largely quit the practice of consistent, deep, pleading corporate prayer. We must ask, “How desperate must the situation become before you begin a ministry of prayer in your church?”

He invited other people to join him (see Nehemiah 2:17). He said, “Let us build the wall.” In other words, he was going to be part of the rebuilding he was called to complete, but he knew that this was a community project. He threw out the invitation to see who among his kinsmen would buy into his vision.

The priests were the first to volunteer (Nehemiah 3:1). Translating that into today’s language, the pastors are to lead the way. We are the gatekeepers for the people whom God entrusts to us. Here in America we desperately need pastors who have the vision to be able to lead their people with a Gospel-centered redemptive ministry that affects the culture.

Whole families were included. There are long lists of families, and the reason they were included is that Nehemiah knew these families had to have a sense of ownership. In fact, each family built their own part of the wall. They were essentially saying, “If the enemy comes in, I don’t want him coming over my part of the wall.” The families bought in. If America is going to be spiritually rebuilt, it will not be from the top down; it will be built from the bottom up, so to speak, and families need to be rebuilt.

Parents must train their children spiritually in ways that we once took for granted. It is no longer valid to expect the church to do it or society to be sympathetic to it. Parents must be involved to see their loved ones preserved and the larger culture changed.

Nehemiah was not distracted by opposition. From the beginning of his obedience, Nehemiah faced ridicule from Sanballat, Tobiah and their sympathizers. Lies were spoken against him, and a pesky contingent opposed the fact that he was rebuilding the walls. Nehemiah took note of his enemies, but their opposition did not deter him.

Nehemiah resolved injustice and conflicts. He knew that the resolution of conflicts and injustices were necessary in order to continue rebuilding. You will never have a situation in which everything will run flawlessly, and there will nearly always be some level of conflict in any great task. As we see both in our country, and within the church, there is frequent conflict and disagreement. The church alone has a remedy, a Person, who can bring peace to any situation. We must bring Him to bear at every turn.

“Lovingly and winsomely, we must share the Gospel message through our lips and testify to its transformative power by our lives. Unless that happens, America’s walls will not be rebuilt.”
-Erwin Lutzer

Of course, it is important to acknowledge that many Christians are praying for revival in America. We want God to revive His church. In fact, things are so desperate that apart from a widespread turning to God, we will not reverse the trends in American culture. But I fear that we want revival to do what we are unwilling to do ourselves—namely, to personally witness to our culture along the highways and byways of everyday life.

We want God to come in great power to convert people, but the Bible stresses the need for personal evangelism. I believe that America’s crumbling walls cannot be rebuilt until Christians—bankers, lawyers, nurses, factory workers—all see themselves as representatives of Christ wherever He has planted them.

One of my greatest disappointments is the number of Christians who work next to unbelievers without ever making it clear that they are Christians. Lovingly and winsomely, we must share the Gospel message through our lips and testify to its transformative power by our lives. Unless that happens, America’s walls will not be rebuilt. We as the church, through the power of the Gospel, have the seeds of renewal. Unless they are watered, cared for and cultivated, we will not rebuild our crumbling walls. ©2016 Erwin W. Lutzer

Erwin W. Lutzer is pastor emeritus of The Moody Church in Chicago, where he served as senior pastor from 1980 until this year. He is the author of more than 30 books, and his preaching is broadcast internationally on the Running to Win radio program.

The Scripture quotation is taken from The Holy Bible, English Standard Version.

A CULTURE IN TROUBLE