The Billy Graham Evangelistic Association of Canada recently launched an Internet-based initiative designed to gather stories of people who came to faith in Jesus Christ through our ministry. This is one of those stories.

To the secular world, the extraordinary difficulties Paul Stoia has faced are all the reason anyone would need to swear off a life of Christian faith. But instead, the 29-year-old Waterloo, Ont., resident is a passionate ambassador for Jesus Christ. And it all goes back to a televised Billy Graham Crusade.

In 2000, Paul was a 15-year-old high school student in nearby Kitchener, struggling with weight and self-esteem issues. Born premature, with underdeveloped lungs, Paul had developed severe asthma.

Meanwhile, Paul’s parents, both from communist Romania, were struggling with weight issues as they tried to adjust from not having enough food in Romania to having too much in Canada. Paul himself weighed 200 pounds by age 10, his weight and his asthma forcing him to miss many school days and outdoor activities. He became so lonely and felt so worthless that he battled thoughts of suicide.

Then came that life-changing televised Billy Graham Crusade in the fall of 2000, when Paul was 15.

“My mom was watching the Crusade, and she called me down to watch with her,” Paul recalls. “Billy was talking about the parable of the prodigal son and how the father had waited for the wayward son, saw him in the distance, then ran up to him and hugged him and loved him.

“I remember being in tears and thinking, This is how much God loves me. Through all the pain and issues I’d endured, God, the creator of the universe, was interested in me and loved me. I had a sense of hope and peace.”

Draghina Stoia, already a Christ follower, said the prayer of salvation with her son. Then she notified BGEA, and the organization sent Paul some Christian books and discipleship materials to encourage him in his new faith.

“I read those books through grades 9 and 10 and that’s when the spiritual transformation happened,” Paul says.

Meanwhile, the Stoia family discovered Paul Sr. had had an extramarital affair during a visit to Romania, and that he had a baby girl from that relationship. Paul Sr. was a godly man who served as a church choir director and fought for Paul Jr.’s life when Paul Jr. was a child. In the stressful aftermath of his one marital failure, Paul Sr. had three heart attacks in six months. The third one, in early 2002, was fatal.

“Having Christ in my life (during that time) meant everything,” says Paul Jr., who loved his father very much. “It helped me endure and it helped me forgive him.”

After Paul committed his life to Christ in 2000, in response to the encouragement of one of his teachers, he took a vocal class and discovered he had a love and talent for singing. His music teacher that year asked Paul to sing the Canadian national anthem for the entire school. “Once I hit the high note at the end, the entire school erupted in cheers,” Paul recalls.

During that time, Paul remembered a Scripture passage he read in one of the BGEA books: “Do you not know that your body is a temple of the Holy Spirit within you, whom you have from God? You are not your own, for you were bought with a price. So glorify God in your body” (1 Corinthians 6:19-20, ESV).

He took the verses seriously. In grade 11, he changed his eating habits and started walking home from school every day. By the end of the school year, in mid 2002, he’d lost 100 pounds.

Later, he took up running and that made even more of a difference.

“I remember my first run—I was 260 pounds, in the summer of 2003, and this old man stopped me and was concerned and told me to be careful. The next time I saw him at the end of the summer, I was 40 pounds lighter. He remembered me and high-fived me as I ran by.”

Then Paul auditioned for a role in the chorus of a community theater production of the famed musical Les Miserables. He was awarded one of the leading roles, and that encouraged him to study voice at the University of Western Ontario. Since then, he has embarked on a career as a professional vocal teacher.

In 2006, Paul’s mother became sick, and he set aside his educational goals, dropped out of school, and moved back to Kitchener to help take care of her. Doctors eventually concluded she had non-alcoholic liver disease. Draghina died last August. 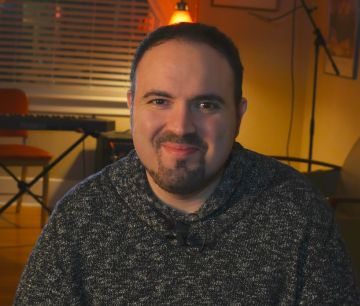 “I really believe God was working through me and my mom,” Paul says. “She was such a strong, resilient believer. Even during her last days, she was still praying, still singing, still having the Lord’s name on her lips. Everyone was so taken aback by this.”

Paul became an agent of the Lord’s love and forgiveness during his mom’s last days, as God worked through him to strengthen the faith of his siblings.

“I told them if we all continue to honor Christ, we will all be reunited with her (in Heaven). So In front of my mom, all six of us made a recommitment to follow Jesus. It was a very powerful moment for them and after that, they changed.”

Indeed, all six sang as a group for people attending Draghina’s funeral, publicly testifying to their faith in Christ. “It was such a service of peace and of hope,” Paul recalls. “People were amazed at how we all had joy and peace and hope in such a circumstance.”

In recent months, Paul has begun to focus again on singing. He has opened a vocal studio in Waterloo, where he teaches everyone from beginners to experienced singers performing in choirs and musical theater.

Whether he’s singing, worshiping, or working through the still-painful loss of his mother, Paul keeps this favorite Scripture in mind:

“I read this to my mom every day, even when she was in a coma,” Paul says. “That gave me and my mom so much hope. When she came out of one of her last comas, she told me our true home is in Heaven. This place is just a stepping stone. Our hope and everything we do should point to Jesus. D 2015 BGEA