And they will come from east and west and from north and south, and will recline at the table in the kingdom of God. —Luke 13:29 (NASB)

Dr. John Wesley White was battling double pneumonia when he stood up to preach the Gospel on April 28, 1996, inside an elementary school gymnasium in Greeneville, Tennessee. His family and friends had ordered him to stay home that night, but the preacher couldn’t be stopped.

“I did not dare not come here,” he said.

Dr. White, a life-long Canadian, preached from Luke chapter 13, in which someone asked Jesus if only a few people will be saved. Jesus answered with these instructions: strive to enter the kingdom of God “through the narrow door” before it’s too late. Those who don’t enter in time, He said, will be cast out—left in a place where there is “weeping and gnashing of teeth” (Luke 13:23-28).

But others, Jesus continued, “will come from east and west and from north and south, and will recline at the table in the kingdom of God” (Luke 13:29).

“Jesus Christ is here,” Dr. White proclaimed that night in the foothills of the Appalachian Mountains, “and He is calling you from the east, the west, the north and the south. Come to Jesus tonight.”

And “the people came,” reads a Decision magazine article from the summer of 1996—”a few at first, then dozens of them, streaming down out of the bleachers and onto the gym floor.”

Later that night, Dr. White suffered a debilitating stroke. After decades of boldly preaching the Gospel around the world as an associate evangelist with Billy Graham Evangelistic Association, the brilliant Canadian preacher had been silenced. Almost. For nine months, he could only speak one word: Jesus. 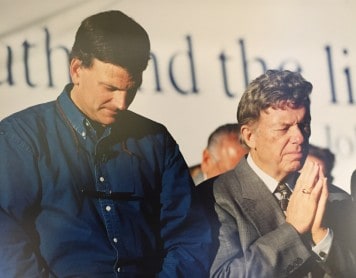 Franklin Graham with his friend and mentor, John Wesley White.

Dr. White was a scholar who held a doctorate in philosophy from Oxford University, among other degrees. He memorized hundreds of Bible verses and wrote more than 20 books. He preached the Gospel with BGEA from 1961 to 1996 and hosted a religious television show in his native Canada.

The evangelist was also a close friend of the Graham family and instrumental in helping Franklin Graham discover his calling to proclaim the Gospel.

It was Dr. White who convinced Franklin to preach for the first time—in Juneau, Alaska, in March of 1989. Since then, Franklin has held 182 evangelistic festivals in dozens of countries, introducing multitudes to the love of Jesus Christ.

In his autobiography, Rebel with a Cause, Franklin wrote, “John became not only my close adviser and friend, but also my teacher.”

Billy Graham wrote about Dr. White, “I have seldom met a man who had a deeper burden for evangelism.”

To the end, Dr. White continued to share the Gospel through monthly letters. The father, grandfather and evangelist leaves behind a legacy of service and devotion to Jesus Christ.

Get information on the visitation and memorial service for John Wesley White in Toronto, Ontario, or write a message to Dr. White’s family.

Jesus said to enter the kingdom of God through the narrow door. You can walk through that door today.