On the Plains of Nineveh, a team of evangelical Christian doctors and nurses with Samaritan’s Purse is working long, arduous days treating traumatic injuries suffered in the battle to oust ISIS from Mosul, its last stronghold in Iraq.

Side-by-side in a 50-bed emergency field hospital, a mix of mostly Muslim combatants and civilians injured from gunfire, car bombs and other mayhem are getting life-saving treatment at the hands of Christians. An estimated 3,000 people a day are fleeing the city, some with life-threatening injuries.

Samaritan’s Purse opened the emergency field hospital Jan. 8 in an area taken back only weeks ago. Franklin Graham, Iraqi government officials, and United Nations representatives, including several from the World Health Organization, were on hand Jan. 12 as the hospital was officially dedicated.

“It’s a privilege to be here,” Franklin said. “As a Christian, I want all people to know about God’s love for them.

“We could not do this without the help of the Iraqi government and the international agencies, and we are so thankful for the cooperation we have received.”

Franklin also noted that for many of the injured, an encounter with the Samaritan’s Purse medical team may be “the only glimpse of Jesus Christ they will ever see, and we need to pray that God will bring not only peace to this country but healing for this country.”

“Most of all we want to thank you for saving people. Because Samaritan’s Purse is here, thousands—tens of thousands—of people will survive.”
—Lise Grande, U.N. humanitarian coordinator for Iraq

Lise Grande, U.N. humanitarian coordinator for Iraq, told those at the ceremony: “We’ve reached out to a number of organizations, asking, begging them to step forward. … Samaritan’s Purse answered that call. We can’t thank you enough.

“You built this hospital in record time. Most of all we want to thank you for saving people. Because Samaritan’s Purse is here, thousands—tens of thousands—of people will survive.”

The components of the emergency field hospital arrived by airlift on Christmas Day from Greensboro, N.C. The Samaritan’s Purse team is providing immediate medical care and surgery for patients who might otherwise die of trauma or infection. Samaritan’s Purse is operating the hospital in cooperation with the Iraqi Ministry of Health. The next nearest hospital is several hours away, in Erbil.

Through four months of fighting in the U.S.-backed operation, ISIS militants still held control of western Mosul in mid-January as Iraqi forces advanced. Most of the Christians in Mosul, where the ancient city of Nineveh stood, fled to Kurdish areas to the north and east after ISIS seized the city in 2014 and imposed its savagery on the primarily Sunni Muslim residents of the city.

Ken Isaacs, Samaritan’s Purse’s vice president of programs and government relations, says the hospital is performing 12 to 15 major surgeries daily and seeing dozens more who need attention in the emergency room. More than half of the patients have been women and children. Samaritan’s Purse will operate the hospital for at least six months, with long-term plans to turn operations over to the Iraqi Ministry of Health

Samaritan’s Purse is one of only three non-governmental organizations in the world able to dispatch and operate such an emergency trauma hospital, Isaacs said.

“We believe the quality of our work is the platform of our witness,” Isaacs told Decision. “Here we are in the plain of Nineveh, only miles from the ancient city of Nineveh, where I think we have a very unique opportunity to be a witness for Jesus Christ.”

Sami Dagher, a longtime ministry partner in the Middle East, said obedience to the Lord’s commands is what motivates Samaritan’s Purse to enter war zones to minister God’s grace.

“Jesus said, ‘I was hungry; you fed me. I was naked; you clothed me. And I was sick; you visited me.’ All we do through Samaritan’s Purse is to show the love of Christ to the people.” ©2017 BGEA 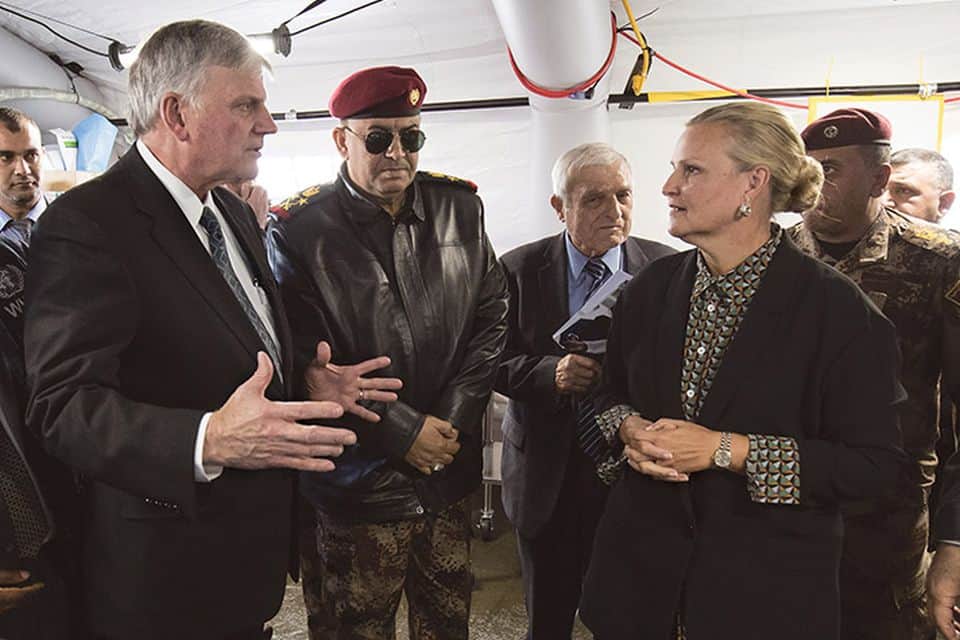