On a cold afternoon in 2008, a masked intruder broke into Heidi Janz’ Edmonton apartment.

“He was demanding money,” Heidi says. “So I pointed at my purse on the sofa and yelled, ‘Take it!’”

Instead, the attacker covered her mouth and started stabbing her in the chest.

“I could feel myself slipping away.” Heidi recalls. “I thought it was the end. I committed my spirit to the Lord before I passed out.”

When Heidi came to, the attacker — Kenneth MacWatt, a man well known to police for attacking people with disabilities — had fled. Heidi lay helpless on the floor, covered in blood, until she was discovered by her elderly father. The wounds were so severe, Heidi needed two months to fully recover.

Heidi was no stranger to suffering. Born with severe cerebral palsy, she grew up mostly in a hospital and has been confined to a wheelchair for her entire life. Simple, everyday tasks require assistance. Due to the paralysis, she even struggles to form words.

People without disabilities often patronized her when she was a little girl. “They thought I was retarded,” photograph: Heidi remembers, “that I’d never be able to do anything,”

But give her a translator or a keyboard, and you’ll discover the depth of her personality and giftedness.

By 19, she had become one of the first people with cerebral palsy to attend university. And in 2003, Heidi earned a PhD in English Literature.

It seemed as if she had beaten the odds—until that day in January five years ago. And though she physically recovered, emotional and spiritual healing were slower in coming.

Heidi describes her frustration: “I was trying so hard to make the most of what I’d been given, and then this random man came through my door and tried to kill me.”

Heidi was angry—not only with her attacker, but also with God. A believer since she was a young adult, Heidi met Christ at a Christian evangelism event, and she’s grateful.

“I realized that I’m human and a sinner, and therefore I need a Savior,” Heidi says. “My disability doesn’t put me in a different category than other people. That realization was the beginning of my journey.”

But the January attack was such an enormous trauma that, for awhile, she pondered suicide.

“I wanted out, I was done,” she says. “The extreme events and losses that I had endured were far beyond what any human should bear. I suffered too much for too long at the hand of God’s supposed Providence.”

But today, she feels different. Heidi’s journey of forgiveness began when she spoke at MacWatt’s trial in 2010, where he was convicted and sentenced to 12 years in prison.

“Mr. MacWatt,” she said, “I want you to know that as a follower of Jesus, I’m compelled to forgive you for the wrongs you have committed against me. I do indeed forgive you.”

Heidi felt like a weight had lifted from her chest. “My forgiveness became real when I spoke the words,” she says.

According to news reports on the trial, MacWatt responded to Heidi’s statement with tears, and later expressed remorse. “I almost killed someone, and I feel bad about it,” he said. Since his imprisonment, MacWatt claims that he has accepted Christ and turned his life around.

But God had more plans for Heidi yet.

That July, Stage Left, a Calgary theatre company that advocates on behalf of marginalized people, invited her to write a play about the attack.

Is it crazy that I’m going to write about almost being killed? Heidi asked herself.

But she wrote the script anyway. Her efforts, she says, were dedicated to her friends with disabilities who were so affected by the attack that they couldn’t sleep for months afterward.

“It was one of the few times in my life that I felt called to do something,” Heidi says. “Through the many ups and downs of the journey, I clung to that feeling.”

Today that script has grown into a full-fledged production called “The Book of Jobes.” The play is a combined effort of Heidi’s company Lone Sparrow Productions, Edmonton’s Kompany Family Theatre, and Calgary’s Fire Exit Theatre.

The production tells the story of Heidi’s struggle with God after the attack. The main character, “Rachael Jobes” alternates between acting out Heidi’s life as a quadriplegic, and narrating it from the perspective of Heidi without disabilities.

Echoing the Book of Job, Heidi’s play invites the audience to grapple with the question, Where is God in our suffering?

God isn’t silent. In the play, He sends a messenger to challenge Rachael Jobes’ view of His providence.

Performed in Calgary, “The Book of Jobes” moved audiences to tears, laughter, and conversations about God’s will in our pain.

“Sometimes God lets us see glimpses of the purpose of our suffering,” Heidi says. “But even when we don’t understand, God can still bring good out of the most horrible things, if you let Him.”

Along with playwriting (Heidi has written four other scripts), her academic work is focused on developing the field of disability ethics.

“I’m one of the first people with disabilities to carve out a career in academia,” Heidi says. “And it hasn’t been easy. But I want to remove the stigma around disabled people.” 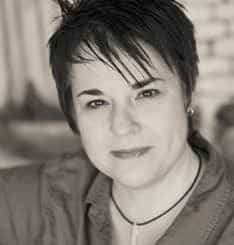 Eleven years ago, a severance package and an invitation to never come back brought Val Lieske’s banking career to an abrupt end.

And today, she couldn’t be happier. With the extra time and money, Val started Fire Exit Theatre Company in Calgary, Alberta.

“I want to tell stories better,” she said. “Christians have the best stories, but we’re not telling them well.”

Fire Exit Theatre does drama from a Christian perspective.

“People will come to the theatre when they won’t come to church,” Val said. “So I am using drama to tell the story that ‘Life is hard, but God is good’.”

And over a decade later, through productions like “The Book of Jobes”, Fire Exit Theatre is still telling this tale.