In a province where churches have few evangelism resources available in French, Quebec Christian leaders are gratefully using My Hope with Billy Graham (Mon Espoir avec Billy Graham) to reach their friends and neighbors.

The Billy Graham Evangelistic Association of Canada (BGEAC) has created a special version of the 30-minute My Hope TV program Heaven, dubbing it in French and seamlessly adding the powerful testimony of Monique Lepine.

Monique’s son was responsible for the 1989 murder of 14 women at Montreal’s École Polytechnique. How Monique survived this nightmare, relying on her faith in Jesus Christ, helps make the French version of Heaven, called L’Éternité, relevant and compelling to Quebecers.

“My world became sheer emptiness, like all hope was lost,” she quietly recalls in the video. “All but a very fine thread remained, keeping me alive, and that was the fact that I had received Christ in my life.”

Claude Noel, pastor of Dieu Avec Nous church in Quebec City, appreciates the quality of the movie. “It is very appealing, well translated, and flows really well,” he said. “It’s not too long or short, and the testimony of Madame Lepine is really the key.”

Ministries like Mon Espoir avec Billy Graham are vitally important to Quebec church leaders, because the province is one of the most under-evangelized regions in North America.

A 2008 survey found that only six percent of Quebec’s 6 million Catholics attended church weekly, down from 90 percent in the early 1960s. Less than 1 percent of Quebecers identified themselves as evangelical. In fact, another survey indicates Quebec has more Muslims than evangelical Christians.

“There’s a lack of materials that equip people for outreach in Quebec, and the Billy Graham Association fills the gap a bit by providing this tool,” said Jean-Sébastien Lemelin, pastor of Église Grâce et Vérité church in Sainte-Anne-du-Sault.

“We found L’Éternité a nonthreatening way to have a discussion about the Lord,” he added. “I could feel the pain of Monique in the video and it opened the way for Bible classes.”

“Pastors should consider it because it promotes no denominational agenda and it unites Christians with one message. They should show the video to their church leaders and maybe do an outreach event.”
– Jean-Sébastien Lemelin, pastor of Église Grâce et Vérité church in Sainte-Anne-du-Sault

Lemelin, who committed his life to Christ at a 1989 BGEA evangelistic event in Montreal, showed L’Éternité as part of a kick-off weekend to introduce his church to Sainte-Anne-du-Sault after it moved north from Victoriaville.

In partnership with BGEAC, Lemelin’s church hosted a Saturday showing of the video for Christian leaders from nine other churches in the region. Afterward, all the leaders were offered a Mon Espoir avec Billy Graham community outreach kit.

• a guide for hosting Mon Espoir outreach events, plus a page on which Christians are encouraged to write the names of nonbelievers for whom to pray and invite to an evangelistic event

• a French-language version of the Peace With God evangelism booklet

“What I found the most useful is the card for people to pray for friends and then invite them to events,” said Noel. “That can be applied to a lot of ministries.”

Noel attended a BGEAC Mon Espoir event for church leaders in Quebec City. Monique Lepine was a featured speaker there, and at several other BGEAC Quebec events. At each, she answered questions about her faith journey with Christ.

“One woman I’ve been trying to present the Gospel to for 10 years told me she didn’t like Monique or religion, but she went to hear the music at our special event,” said Jean Yves Marleau, pastor of Assemblée Vie Nouvelle church in Saint-Malachie, a village southeast of Quebec City. Lepine attends Assemble Vie Nouvelle, which hosted a Saturday Mon Espoir event for church leaders.

“This woman asked Monique two hard questions and Monique answered,” Marleau said. “The next day, she was at our church service and she sat with Monique. I’m going to follow up with her.” 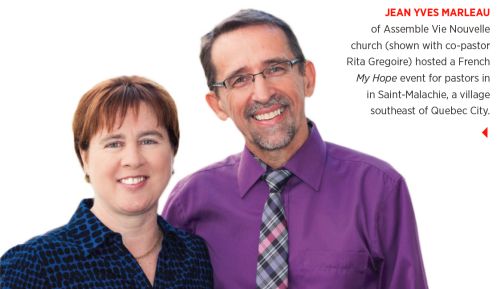 As he rejoiced in this powerful movement of God, Lemelin strongly encouraged other churches in Quebec and across Canada to use Mon Espoir/My Hope to equip their congregations in reaching out to non-Christians:

“It’s a nonthreatening project, and pastors should consider it because it promotes no denominational agenda and it unites Christians with one message. They should show the video to their church leaders and maybe do an outreach event.”

At Assemblée Vie Nouvelle church in Saint-Malachie, Marleau said at least 20 people made commitments or recommitments to Christ after seeing L’Éternité.

“We should use it in Quebec, especially as everyone knows about Monique Lepine,” he said. “What’s great in this video is the relationship between the life of the two people (Monique and firefighter Cheyane Caldwell) and their decisions to follow Christ. It’s so powerful.” D 2015 BGEA

FOR MORE INFORMATION ABOUT MON ESPOIR AVEC BILLY GRAHAM, PLEASE VISIT MONESPOIRAVECBILLY GRAHAM.CA (IN ENGLISH, MYHOPEWITHBILLYGRAHAM.CA). YOU CAN SEE L’ÉTERNITÉ AND MOMENTS DETERMINANTS ON THE WEBSITE, DOWNLOAD FREE RESOURCES, ORDER A COMMUNITY OUTREACH KIT, AND BECOME A FINANCIAL PARTNER IN THIS VITAL MINISTRY. L’ÉTERNITÉ WITH ENGLISH SUBTITLES CAN BE WATCHED AT BILLYGRAHAM.CA/VIDEO.