On Monday, Jan. 5 at 2:07 p.m., about three dozen people were on the BGEA website, PeaceWithGod.net.

For at least four of those people, that minute marked a choice that carries eternal weight: the decision to accept Jesus Christ as their God and Savior.

Anyone eyeing the ministry’s Google Earth feature at 2:07 would have seen the spinning globe zero in on Riyadh, Saudi Arabia, before turning counterclockwise to mark a decision on the other side of the world, in San Francisco.

Seconds later, the green marker returned to the Middle East, as it often does, recording a salvation decision in Kabul, Afghanistan. In the next five minutes, decisions for Christ were indicated in Egypt, India, Iraq, Mexico and the United States.

Each person visiting the site had the option to live chat with a trained online counselor, ask questions and receive online follow-up materials to strengthen their walk with God.

That’s a 60-second snapshot of the Billy Graham Evangelistic Association’s Internet outreach, which marked its 5 millionth decision for Christ in November. Through Internet Evangelism and BGEA’s other ministries, from My Hope to the Rapid Response Team, more than 9 million people heard the Gospel in 2014.

Long before the Internet, you could say Billy Graham “went viral” with the help of the technology of the day: the telegraph. 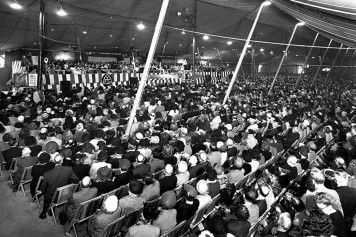 “We like to think that radio and television made Billy Graham popular,” said Duane Gaylord, vice president of Internet evangelism and digital media at BGEA. “Not exactly accurate! It all began with the telegraph.”

In 1949, as Mr. Graham preached the Gospel under a tent known as the Canvas Cathedral in Los Angeles (pictured left), newspaper tycoon William Randolph Hearst inexplicably sent a one-line telegram to his newspaper editors instructing them to put Billy Graham in the spotlight.

Suddenly, the remarkable stories of people being saved in the tent (including Olympic athlete and WWII bombardier Louie Zamperini of Unbroken) were splashed across the front pages of newspapers around the country.

“God may have used Mr. Hearst to promote the meetings, as (my wife) Ruth said, but the credit belonged solely to God,” Billy Graham wrote in his autobiography Just As I Am.

“All I knew was that before it was over, we were on a journey from which there would be no looking back.”

Throughout the Whole World

“And this gospel of the kingdom will be proclaimed throughout the whole world as a testimony to all nations, and then the end will come.” (Matthew 24:14, ESV) 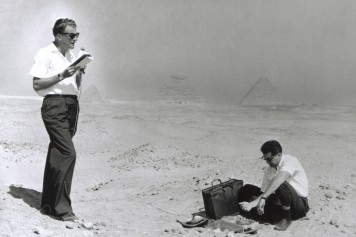 From the time BGEA was founded in 1950, Billy Graham and his team have used the latest technology—a trend that continues under Franklin Graham’s leadership.

From recording the Hour of Decision radio program (now Hour of Decision Online) on a reel-to-reel recorder by the pyramids in Egypt to broadcasting Crusades on network television, BGEA embraced a mission to proclaim the Gospel of Jesus Christ through every effective means.

Pictured right, Billy Graham and Cliff Barrows record “The Hour of Decision” radio program at the pyramids in Egypt in 1960.

“You have to go to where the audience is gathering,” Duane Gaylord said. “That means we also have to be committed to change—sometimes fast change.”

Since the Internet evangelism ministry Search for Jesus was launched, more than 25 million people from hundreds of countries and territories have been exposed to the Gospel.

Years before BGEA’s Internet Evangelism ministry was born, Billy Graham talked about the power of the web in his My Answer column: “One of the most interesting facts to me about the Internet is that it now reaches some of the most remote corners of the world – including countries that are otherwise closed to the preaching of the Gospel.”

“I believe God put the Internet on this earth for the Gospel of Jesus Christ,” Gaylord said. “How else would we be able to cover the world?”

From Toronto to Pakistan

Just like the original Billy Graham Crusade team used satellite technology and TV to expand the reach of its live events, Franklin Graham uses the web to stream his evangelistic Festivals to a global audience.

“Our audience on the web is usually equal to or larger than the audience attending the live venue event,” Gaylord said. 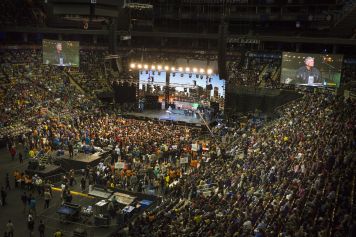 About 39,000 people attended the event in person. More than 77,000 people experienced the web stream.

The web audience used everything from iPads to a Sony PlayStation to tune in, with more than half the viewers accessing the stream via a mobile device.

Perhaps the most exciting thing about the web stream is the ability to reach people in countries where open preaching of the Gospel is difficult or forbidden. During the Pittsburgh stream, clicks came from 149 countries and territories.

The web audience can chat or pray with an e-counselor, interact with fellow viewers and make a decision for Christ. Anyone who indicates a decision is invited to enter into one of BGEA’s free online discipleship courses.

If God hates divorce then does He hate me?

My dad is dying. How do I help him get saved?

That’s a tiny sample of real questions people typed into a search engine last year before landing on PeaceWithGod.net, seeing a clear presentation of the Gospel message and making a decision for Christ. 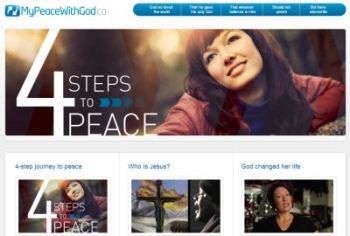 The ministry’s advertising manager, Andrea Bevins, is part of a team that creates Google and other search engine ads that direct people to Gospel-centered articles, videos and landing pages specific to a particular topic or need. The team may juggle as many as 200 different ads at any given time, and the reach is staggering. In 2014, Google ads garnered more than 8 million clicks to PeaceWithGod.ca, resulting in more than 1 million decisions for Christ.

Sifting through the specific search terms that lead people to click a Peace With God ad keeps Bevins and her team from getting caught up in the numbers. Each decision is a real person with a unique story.

“Sometimes you’ll just get a glimpse of a person or a moment in a person’s life, and it’ll bring tears to your eyes,” Bevins said.

One recent search, for example, jumped out: Will Jesus forgive me if I end this misery?

“That one is particularly emotional for me, because I know someone who knows the Lord but constantly struggles with depression,” Bevins said.

“I feel like I can envision the type of pain that this searcher is feeling. And that’s something that’s real for me.”

Lecrae, Billboard 200 and The Tonight Show 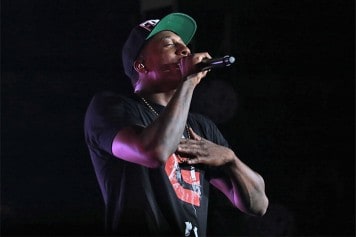 Such was the case in September when rapper Lecrae (pictured left) reached No. 1 on the Billboard charts and was scheduled to appear on The Tonight Show with Jimmy Fallon. Since Lecrae had previously shared his powerful story of salvation through My Hope with Billy Graham, BGEA saw an opportunity to share the Gospel with a wider audience.

“We felt like there would potentially be a lot of extra search traffic surrounding his name,” Bevins said, “and felt we could speak into the salvation part of his story in a way that was really relevant to people.”

BGEA’s digital team created a fresh landing page that explained Lecrae’s story and gave readers a chance to learn more about Jesus. Through search engine marketing the new page has been viewed more than 47,000 times to date.

More importantly, 121 people have made their way from that page to PeaceWithGod.net, and 10 of them have followed through to indicate a decision for Christ.

Despite all the planning, praying and innovation that goes into the BGEA’s ministries, God continually reminds the team that it’s His power, not human effort, behind every successful movement. 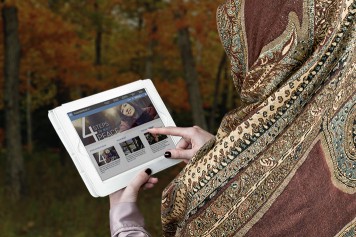 This is perhaps most apparent in the amazing and inexplicable ways people around the world are finding sites like PeaceWithGod.net and making decisions for Christ.

For example, in the month of October alone, more than 100,000 people from Saudi Arabia, Iraq and Syria visited the evangelistic site. Tens of thousands of people from those countries indicated decisions for Christ in 2014.

“How is that happening?” said Duane Gaylord. “We don’t understand it. We don’t buy [ads] in the Middle East or other countries that are hostile to the Gospel. Yet it gets there.”

The only explanation is that God is using the Internet evangelism ministry to reach people in seemingly unreachable areas with the message that Jesus is the Way, the Truth and the Life.

“No matter how many blockers these countries use—countries that really don’t like the message of the Gospel of Jesus Christ, that Jesus is the one and only Way to heaven and to the Father—the message still finds its way in there,” Gaylord said.

As the Holy Spirit continues to move, it seems the role of the BGEA is simply to be faithful, open and available to be used by God.

“You really realize how it is not you, in the midst of it,” Gaylord said. “It’s not the Billy Graham Evangelistic Association. It’s not our plans. It’s really God who’s weaved it all together.

“What exciting times we believers live in, if we are open to what God is doing on the face of this earth in such a time as this.”