*This story was originally published on Dec. 6, 2013—the day following Nelson Mandela’s death.

Today’s anniversary of Nelson Mandela’s birthday is a reminder of the importance of Billy Graham’s statement that “Christianity is not a white man’s religion … Christ belongs to all people.”

Billy Graham and Nelson Mandela never met but the two have been connected in many ways over the years.

Both were born in 1918. Both have appeared countless times together on the USA Today/Gallup’s list of “Most Admired.”

And the two corresponded with each other through letters during Mandela’s 27-year prison sentence.

But it’s the shared passion to end apartheid that universally united these two. 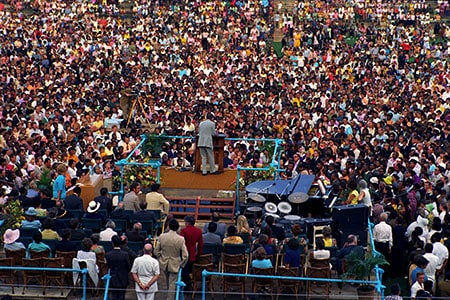 Mr. Graham held Crusades in both Durban and Johannesburg in 1973, some 20 years after receiving initial invites to preach in South Africa. He wouldn’t accept an invitation unless the Crusade meetings were racially integrated. Two decades before that, he personally removed segregated ropes at a Chattanooga, Tenn., Crusade.

“My wife and I have prayed for the country of South Africa since 1951, when I was first asked to hold meetings there,” Mr. Graham said in a 1994 statement on the election of Mandela as President of South Africa. “We refused to accept that invitation until 1973, when we were able to hold fully-integrated crusades in the cities of Johannesburg and in Durban.” 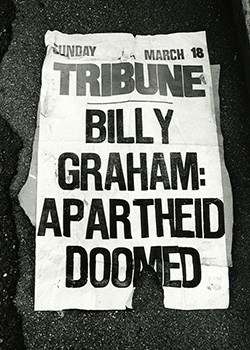 Overflow crowds of more than 100,000 people came out to see Mr. Graham preach in Durban and Johannesburg in the country’s first integrated public meetings.

“Christianity is not a white man’s religion,” Mr. Graham preached during the rallies, “and don’t let anybody ever tell you that it’s white or black. Christ belongs to all people.”

The front page of the March 18, 1973 issue of The Sunday Tribune declared in a large, bold font: “Billy Graham: Apartheid Doomed”

“It was at those meetings that I was struck with the terrible injustice of the apartheid system, which I referred to as ‘sin,’ “ Mr. Graham said.

Decades later, Mr. Graham was one of Mandela’s supporters when he took office in ‘94. Mandela died at age 95 on Dec. 5 after a long illness.

“The amazing events surrounding the election of Nelson Mandela to the presidency of South Africa are a testimony to us all of this great man’s resiliency in the face of 27 years of imprisonment,” Mr. Graham continued in his statement. “His faith in his country; his ability to command the respect of the people of all races in that country.”