Filming began today on Unbroken: Path to Redemption, the amazing true story that will serve as a stand-alone tale and follow the events of 2014’s epic saga Unbroken. Unbroken: Path to Redemption tells the inspiring and powerful tale of Louis “Louie” Zamperini’s post-World War II struggle to find peace and forgiveness after his brutal treatment as a Japanese prisoner of war.

Unbroken and Unbroken: Path to Redemption are based on Laura Hillenbrand’s masterpiece Unbroken, which spent more than four years on The New York Times best-seller list in hardcover, including 15 weeks at No. 1. The paperback debuted at No. 1 and remained there more than 20 weeks, and the young-reader edition also became a Times best-seller. The three-time Academy Award®-nominated film Unbroken opened to the third-best Christmas Day opening of all time before going on to make almost $165 million worldwide.

“The life of American Olympian, WWII airman, castaway and P.O.W. Louie Zamperini is a story so extraordinary, it staggers the imagination,” Hillenbrand said of the upcoming film. “It is a life rich in lessons for all of us—lessons in resilience and ingenuity, grace and humanity, forgiveness and the redemptive power of faith. I am so pleased to see his story brought back to the screen, where it will continue to inspire audiences.” 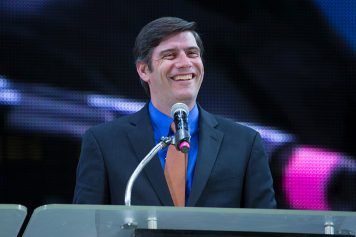 Will Graham is the third generation of Grahams to proclaim the Gospel of Jesus Christ under the banner of the Billy Graham Evangelistic Association (BGEA). In addition to his role as vice president of the BGEA, he serves as executive director of the Billy Graham Training Center at The Cove in Asheville, N.C.

Unbroken: Path to Redemption stars Samuel Hunt (Chicago P.D.) as Zamperini; Merritt Patterson (The Royals) as his wife, Cynthia; and Will Graham as his own grandfather, evangelist Billy Graham. “Like my father and grandfather before me, I’m blessed to have been able to answer a call to evangelism,” Will Graham, Vice President of Billy Graham Evangelistic Association, said. “But knowing how God used Billy Graham in Louie Zamperini’s life, I couldn’t pass the opportunity to portray him in this inspiring story.”

Unbroken: Path to Redemption is produced by The WTA Group in partnership with Universal 1440 Entertainment, with theatrical release through Pure Flix.

Following the Allied victory in World War II, Unbroken: Path to Redemption tells the story of famed Olympic athlete and prisoner of war Louie Zamperini’s experiences returning to the United States. After Louie was freed from captivity in Japan, he returned to California and tried to resume his life, marrying the love of his life, Cynthia Applewhite. Wrestling with untreated Post-Traumatic Stress Disorder and suffering constant nightmares about his savage merciless camp guard—Cpl. Mutsuhiro Watanabe, known to the men he ruled over as “The Bird”—Louie fell into alcoholism, depression and despair. During fall 1949, Cynthia convinced Louie to attend a Billy Graham crusade. Deeply affected by Graham’s preaching, Louie made a commitment to Christ that restored his faith. He quit drinking, found that his nightmares had vanished and began the extraordinary healing process of forgiving his captors.

“Before PTSD even had a name or diagnosis, far too many World War II veterans like Louie battled this invisible pain,” said Glenn Ross, General Manger and Executive Vice President, Universal 1440 Entertainment. “Unbroken: Path to Redemption shines a powerful light on their struggles and how Louie became a beacon of hope to us all.”

Written by Richard Friedenberg (A RIVER RUNS THROUGH IT) and Kenneth Hixon (CITY BY THE SEA), Unbroken: Path to Redemption is directed by Harold Cronk, who helmed the hit faith films God’s Not Dead and God’s Not Dead 2.

“The strength, courage and faith of Louis Zamperini is remarkable. His struggles, his shortcomings, and above all, his story of redemption weaves together many important lessons for all generations,” said Michael Scott, Pure Flix founding partner. “Pure Flix is honored to bring the true story of Zamperini’s life and legacy to theaters as we know it will inspire and transform audiences.”

“Louie Zamperini’s story in WW2 is well known from Unbroken the book and film,” said Producer Matt Baer, who also served as a producer on 2014’s Unbroken. “But the details of his post-war struggles and ultimate redemption are so stirring, they deserve to be told in a stand-alone project.”