Despite months of fierce opposition from mostly LGBT groups, the three-day Lancashire Festival of Hope drew more than 9,000 people from across North West England Sept. 21-23.

About 40 protestors stood across the street from Winter Gardens in Blackpool the first night, carrying signs and displaying a papier mâché statue of Jesus wearing a white robe and a rainbow sash. Fewer came on the second and third nights.

Inside Winter Gardens, the crowds filled the Opera House, spilling over into the Empress Ballroom, where they watched live music and Gospel messages from Franklin Graham on a large screen. And each night when Franklin preached, victory was declared: a 100-year-old woman prayed for forgiveness of sins for the first time. A 3-year-old accepted salvation, a 13-year-old asked Christ to take control of the decisions in his life, and a Muslim imam came to see for himself what all the controversy was about.

“I heard there was an evangelist from America who was coming here to Blackpool and he would be preaching hate speech, so I wanted to come and see for myself,” the imam said. “There was nothing hateful in what I heard.”

Blackpool, a seaside town of about 142,000, sits on the Irish Sea about 240 miles from the global city of London. It was built as a holiday resort during the Industrial Revolution, grew through the Victorian age, and attracted up to 30 million tourists a year in its heyday. But with the onset of affordable air travel, many tourists took their holiday in the warmer climates of Spain and other Mediterranean nations.

Today, only about 10 million tourists travel to Blackpool each year, and the town, known for its glistening lights, Blackpool Tower and ballroom dancing, is plagued with alcohol abuse, drug abuse, domestic violence and mental health issues.

“There are real pockets of deprivation,” said Rick Oldland, pastor of The Well Church. “Of the 10 poorest council districts in the United Kingdom, five are in Blackpool. At one point, we had the highest teenage pregnancy rate in Europe. There’s human trafficking, a high suicide rate, high infant mortality and low educational attainment.”

Such deprivation and poverty must attract a response from the church, Oldland said. But as Blackpool has become home to a more liberal population and varied religious groups, secularism has taken root and church attendance has dwindled. Some churches have closed and others are more left-leaning. Some even address God as “she.”

“The Britain that sent the Gospel out to the nations in years gone by is not the Britain of 2018,” said Steve Haskett, Anglican pastor of St. John’s Church.

Many of Lancashire’s churches today preach a social Gospel.

“They teach only that God is love, and they don’t call for repentance of sin,” said retired school teacher Doreen Ainscough. “The meaning of the cross is neither explored or explained.”

Christianity is being squeezed out of much of the mainstream, Ainscough said.

We’re going into more and more of a confined space. And the more confined the space, the less the opportunities for evangelism. When I was listening to Franklin last night, I was thinking, I wonder how many more years we will have this opportunity for people like Franklin to openly speak about the Gospel message.

There are Christians in some parts of Lancashire who have no church to go to. And pastors struggle as well, some with several small congregations under their care, and others feeling isolated with one small congregation.

“There is a real need for Biblical and prayerful support and encouragement and Christian fellowship for so many,” Ainscough said.

She added: “I know that in America things are becoming less Christian, but when I look at the American channels on TV, I still think you’ve got a lot more opportunity there than what we have here.”

When the Lancashire Festival of Hope was announced, the outcry from the LGBT community was such that the Festival signs were pulled from the public transportation buses. Radio and television stations tried to back out or refused to carry Festival advertising.”

But in the midst of such bleakness, Christians from 200 evangelical churches stood strong for the Gospel. “We’ve been praying intensely for this community, probably for a culmination of over five years,” said Liz Hall, the Festival’s prayer chair. “We started praying specifically for the Festival in July of 2017. We’re finding that people we thought would never accept an invitation are accepting them.”

Christians kept their eyes on the cross, their faith just as fierce as the opposition. “People are going to their death without Jesus Christ,” said Haskett, of St. John’s, “and I can’t just sit around and do nothing about that. We’re talking about 95 percent of the population of Lancashire who are lost, and that’s nearly 1.5 million people.”

More than 2,000 people came to Winter Gardens the first night of the Festival, and local pastors and Christians watched in awe as the light of Christ penetrated the darkness. Reverend Oldland’s daughter brought her boyfriend, whom Oldland and his wife had been praying for, and he accepted Christ.

Pastor Peter Lilicrap and his wife, Jill, brought their friend Ganga whom they had been praying for. They kept silent when a stranger broke into their group, and they were glad they did. The stranger sat next to Ganga, and it turned out the two women had known each other in previous years. Both of them went forward at the invitation to make commitments to Christ.

Eighty-one-year-old Maude Todd of Blackpool lost her husband in April, and that set her mind to thinking. Both her son and daughter had talked to their dad about giving his heart to Christ, but they were uncertain if he had. When Maude heard about the Festival, she got tickets as quickly as she could. And when the invitation was given, she came forward and asked Christ to forgive her of her sins.

More than 400 people made commitments for Christ at this breakthrough event.

“This is not the end,” Haskett said. “We want this mission of praying together to continue. What we’re hoping for is that these decisions turn into lifelong commitments to being followers of Jesus Christ, and that these believers become fully integrated members of our local church, who will in turn then go on to reach others for Jesus as well.”

Margaret “Peggy” Ratcliff turned 100 years old July 29. She stopped going to church decades ago or even thinking much about God.

Her neighbor David Barnfield would mention Jesus from time to time, but she wasn’t interested.

“I haven’t done anything wrong,” she would say.

“She was never hostile,” David says, “but I knew when I’d said enough.”

Ms. Peggy never married, and all of her siblings are gone, so David helps look after her.

n Saturday, Sept. 22, while they were shopping, he asked if she would fancy going with him to the Lancashire Festival of Hope in Blackpool the next day. She agreed and said she would be ready at 2 p.m.

He popped over at 10 a.m. the next morning to check on her.

“I wanted to make sure she was still going,” he said.

Then his voice softened. “There may not be another time,” he said.

Ms. Peggy gave Franklin her undivided attention. And when the invitation was given, David asked: ‘Would you like someone to pray with you, Peggy?”

“Well, I can’t walk down there,” she said. David hurriedly went in search of a counselor. And at 100 years of age, Ms. Peggy was born again!

‘HOW WONDERFUL IT WAS!’

In April of 1954, 13-year-old John Mosey went with his Sunday school teacher to a relayed broadcast of Billy Graham’s Harringay Crusade.

“It was sound only,” he said. “I was in the Methodist Central Hall in Coventry, and that night I gave my life to Christ, and I never looked back. It was a Thursday night, and by Sunday, I’d read Matthew, Mark, Luke, John, Acts and a bit of Romans.”

That Sunday night, at an open-air service near his church, the man in charge put a microphone in John’s hand and told the audience, “There’s a young man here who’s got something he wants to tell you.”

“I was surprised,” John said, his eyes widening in memory. “But he gave me the microphone, so I told them how wonderful it was to have your sins forgiven! And since that night, I’ve preached around the world as an Assemblies of God minister, in 42 countries.”

God has taught him a lot about forgiveness through the years.

“Thirty years ago this Christmas, our teenage daughter was murdered. She was 19, and she was blown out of the sky, in Pan Am flight 103, which blew up over Lockerbie in Scotland. It was hard, but God helped us to forgive.”

Through the tragedy, John was invited to speak at schools about the bombing, and each time he talked about forgiveness. He has preached in Westminster Abbey at anniversaries of the event where the prime minister and members of the royal family attended, and has written to the queen and Prime Minister Tony Blair on spiritual matters.

John, now 78, has seen hundreds come to Christ. Ten years after he accepted Christ, he baptized both his parents. Both his son and daughter are Christians; in fact, his son is now his pastor.

“I am just so thankful for the ministry of Billy Graham, and even more for the grace of God,” he said. “That’s why I’m here, serving as a counseling supervisor, so someone else can make the same decision I made as a young boy.” 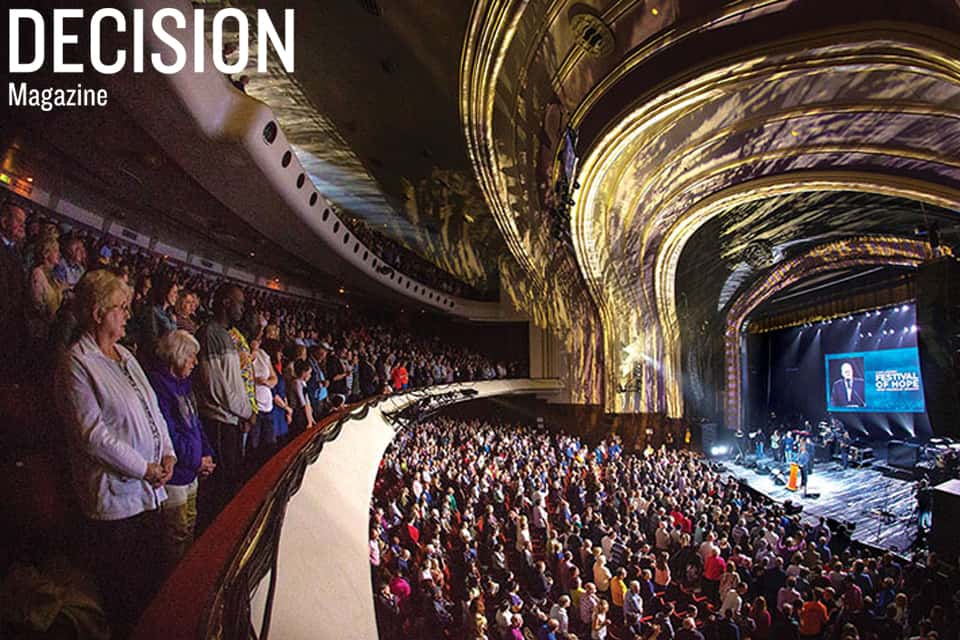