As the dean of the school of religion at a major Christian university, Woodrow Kroll administered a standardized test to 1,100 incoming freshmen. He had no reason not to be optimistic about how the students would perform. Most were reared in a Christian home, attended Christian schools and were active in Bible-believing churches. All they had to do to pass was to correctly answer 50 percent of the 150 questions.

When only 45 of the 1,100 freshmen passed, Kroll sat stunned. “That’s when I knew there was a systemic problem in the way we are passing on the Body of Truth to our children,” he said, looking back.

And that was in 1980. Thirty-five years later, the plague of biblical illiteracy in America has only worsened.

“Church people don’t fare much better than non-church people with regard to their understanding and command of the Bible,” he added.

Research bears out that assessment. A recent LifeWay Research study of Americans who attend church regularly reported that 19 percent of those surveyed said they read their Bible every day; 26 percent a few times a week; 14 percent once a week; 22 percent at least once a month; and 18 percent rarely or never.

Considering how biblical literacy in the U.S. has plummeted, Kenneth Berding, professor of New Testament at Biola’s Talbot School of Theology, recently wrote: “Christians used to be known as ‘people of one book.’ Sure, they read, studied and shared other books. But the book they cared about more than all others combined was the Bible. They memorized it, meditated on it, talked about it and taught it to others. We don’t do that anymore, and in a very real sense we’re starving ourselves to death.” 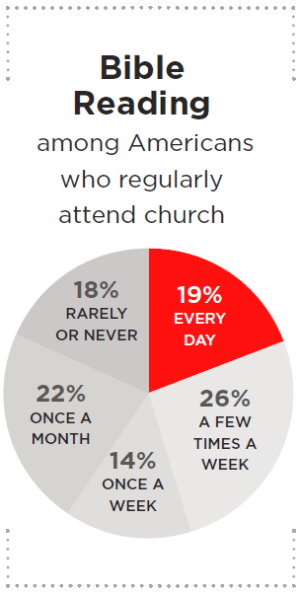 How has this happened? And what’s the answer to reverse this disturbing trend?

In addition to Kroll, Decision talked with Alistair Begg, senior pastor at Parkside Church in suburban Cleveland; Jerry Vines, founder of Jerry Vines Ministries and a former pastor known for expository preaching; and Mark Yarbrough, professor and vice president for academic affairs at Dallas Theological Seminary. All four are leading seminars later this year at the Billy Graham Training Center at The Cove in Asheville, N.C..

The consequences of such a slide, both within society at large and within the church, are staggering. Today’s postmodern culture is dark and broken, without the guiding force of the Scriptures. “There is very little biblical worldview in our culture today, and that explains why some positions are taken that are very contrary to the teachings of the Bible,” Vines explained. “There’s no biblical worldview because most people don’t know what the biblical worldview is. All they’re left with is a secular perspective, with morality being not based on biblical authority but on whatever the current flavor of the day may be in the culture.”

Many churches and ministry organizations today are characterized by a dearth of mature spiritual leaders, Yarbrough said.

“There’s a leadership vacuum, in part because we don’t have people who are grounded in the Word of God.”

Vines also voiced his concern for today’s youth. “We are bringing up a generation of young people who are sitting ducks for the secular culture,” he said. “When they head off to college, they don’t receive a solid biblical worldview, and many fall off one by one and reject outright the teachings of the Bible.”

What precipitated this transition from a Bible-friendly to a Bible-hostile environment, as Kroll describes it? There’s plenty of blame to go around, the four Cove seminar leaders said.

While taking prayer and the Bible out of public school classrooms in the early 1960s certainly helped diminish America’s understanding of the Bible, the onus rests more on parents not teaching the Scriptures to their children and on preachers not teaching the Bible in-depth to their congregations. And individual Christians also bear responsibility.

“If you combine the decline of personal Bible reading and the notion of family devotions, it doesn’t take very long before the impact of biblical malnutrition begins to show itself,” Begg said.

Today’s anti-Christian bias may be partially at fault, but Vines said the church is the more likely source of the problem. “There has been a de-emphasis on Sunday school in many of our churches and the trend away from solid Bible exposition in the pulpit,” Vines noted.

Yarbrough believes churches and parachurch organizations have failed to equip people in the pews to cultivate a personal relationship with Christ. “Over the last 30 to 40 years, while we have honored the Word and proclaimed the Word, we have not done well in teaching believers how to study the Bible for themselves and allow it to saturate their day-to-day living and transform their lives,” he said.

These leaders recommend several corrective measures. Yarbrough said pastors and church leaders must 1) model the relevancy and vitality of God’s Word in their own lives; 2) motivate others to memorize and study the Scriptures themselves, including in an accountability group setting; and then 3) mentor them by showing how to become consistent students of the Word.

Kroll added that churches should become more involved in the daily lives of parents, helping and teaching them how to instruct their children in the Scriptures, especially how to hide it in their heart as Psalm 119:9-11 teaches. However, in the long run, the obligation truly lies with individual Christians taking responsibility for pursuing God with their whole heart. “That begins with desiring to know the heart of God and then disciplining yourself to read the Bible every day, believing that it’s doable,” he said.

If more and more Christians become Bible-focused and Bible-centered, Begg believes they will be better prepared to help those less knowledgeable navigate their way around the Scriptures. That can begin, he said, by pointing out:

• God made the world and He made it perfect.

• Sin entered into the world through the Fall.

• The work of Christ is the work of redemption and recreation.

• One day there will be a new Heaven and a new Earth.

“Once someone has a framework like that, you can help them find Jesus because all of the Bible is about Jesus,” Begg said.

“The challenge is in making sure we are speaking to today’s biblically illiterate audience intelligently, authoritatively, kindly and sensitively—and allowing the Word of God to do the work of God by the Spirit of God in the lives of people,” Begg explained. “Only God can open blind eyes and soften hard hearts. We must be confident in the absolute power of God.” D 2015 BGEA