The captivating, true story of Louis Zamperini—the American Olympian and WWII prisoner of war whose life was transformed after he heard the Gospel at a Billy Graham Crusade—is now on Blu-ray and DVD.

Unbroken: Path to Redemption picks up where the 2014 movie Unbroken left off and includes a cameo from Will Graham, who portrays his late grandfather, Billy Graham.

>> Will Graham: What I learned from portraying my grandfather

The first film, which was directed by Angelina Jolie, portrayed Zamperini’s Olympic career and his horrifying experiences during WWII after his plane crash-landed in the Pacific.

Based on Laura Hillenbrand’s book by the same name, the Unbroken movie comes to a close when a young Zamperini finally makes it home to California after surviving brutal treatment and near-starvation in a Japanese POW camp.

“That was where Unbroken ended, and it was a great high point,” Will Graham wrote. “But that’s not where Louis Zamperini’s story ended. In fact, the struggles were just beginning.”

The new film delves into Zamperini’s battles with post-traumatic stress disorder, alcoholism and night terrors—all of which threatened to destroy his marriage and his life after the war.

When it looked like everything was about to fall apart, Zamperini reluctantly agreed to attend a religious meeting under a great, white tent in the middle of downtown Los Angeles. The preacher he heard that autumn night in 1949 was a young Billy Graham, who passionately shared the hope of Jesus Christ. The message caught Zamperini’s attention. He accepted Christ as his Savior and was never the same.

“Louis only found true and lasting peace when he surrendered his life to Christ at my grandfather’s historic 1949 Los Angeles Crusade,” Will Graham wrote. “After beginning a relationship with Jesus, Louis never had another nightmare, never took another sip of alcohol, and his marriage was restored.”

Zamperini’s post-war battles, the love story between him and his wife, and his journey to peace are all captured in the new film.

The Blu-ray and DVD versions also include a never-before-seen bonus feature, “Reliving the Revival,” which contains an interview with Will Graham. He talks about recreating the historic 1949 Los Angeles Crusade, which propelled his grandfather into the national spotlight and saw thousands of people—from Hollywood personalities to mobsters—find peace with God.

Many of the people portrayed in the film—including Louis Zamperini and Billy Graham—are no longer on this earth. But through the movie’s beautiful tale of redemption and forgiveness, their powerful, Christ-centered stories live on. 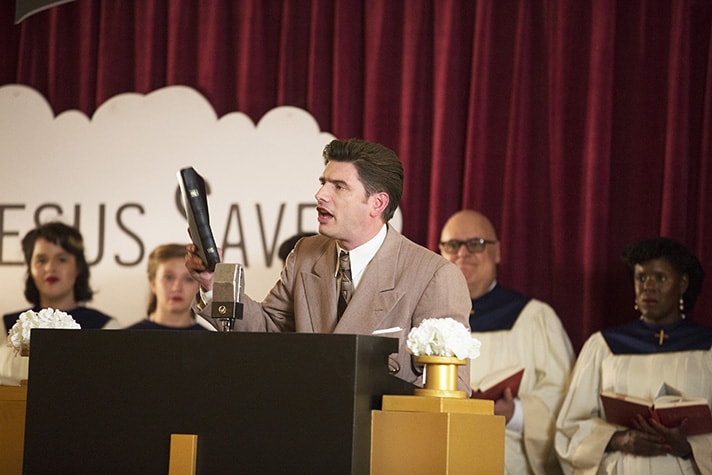