Billy Graham was the son of an American dairy farmer, but God used him to share the Gospel with the whole world.

People from more than 50 countries attended his funeral service in February, as thousands more watched online from around the globe. Pastors and evangelists who have spoken about Mr. Graham’s life come from the Middle East, Europe, Africa, Asia and North America.

Messages of thanks and stories of Mr. Graham’s impact are still being written in multiple languages and from many countries. Here are 12 of those messages from six continents.

“We are eternally grateful to Billy Graham. My mother-in-law got saved at the 1968 meeting in Brisbane, Australia. Then as a result of her prayers, my father-in-law got set free of alcoholism and their son (my husband) got saved. Both my in-laws died in their 90’s as saved Christians. Thank you!” —Judy Jackson

“Being raised in the Soviet Union, I was taught that there is no God. In March 1993, being a college student, I went for the first time to Billy Graham’s Crusade. Listening to his message about Jesus who died for my sins, I accepted Jesus Christ as my Savior and Lord. Since then, I am God’s child.” —Radu Coliba

“I am from rural Kenya. Billy Graham’s sermons led me to salvation. I was especially touched by ‘The Three Most Momentous Days in Human History,’ and ‘God Is Our Refuge’ after the 2001 terror attack. The life of this man has touched my life in a very, very special way.” —Leonard Kiprono

“I’m a second generation recipient of the Gospel preached by Billy Graham in the Netherlands in 1954. My father, Rene Ferry Diets, a former sailor in the Royal Dutch Navy and Japanese POW survivor, was there to give his heart to the Lord. That decision has impacted family members for four generations!” —Maria Diets-Stover

“I was born in Guyana, South America. Growing up I listened with my entire family on Sunday evenings via radio to our beloved Dr. Graham. All the villagers would turn on their radios to listen to Dr. Graham. He touched the lives of not only Christians but Hindus and Muslims.” —Leonard Bridjmohan

“He has a special place in the hearts of Koreans. God used him to ignite the passion for evangelism in Korea. He was the ‘chariots and horsemen’ of evangelism and rekindled the burning desire for the lost in our hearts.” —Yong-Joong Cho, General Secretary of the Korean World Missions Association

“I was saved at a Billy Graham Crusade in Germany in September 1960. I only went one night with no idea whether I would be able to understand the English message of Mr. Graham. God had something else in mind—my need of salvation. Thank you, Lord, for this man of God. I went on to be a missionary in Kenya.” —Elfi Japp Rivera

“I accepted Jesus as my Savior at age 10 during the 1955 Billy Graham Crusade in Toronto, Canada, and have served the Lord ever since. I am grateful to this wonderful man of God who dedicated his life to winning souls for Jesus.” —Eva Leisups

“All the Christians in India are in deep pain at Rev. Dr. Billy Graham’s passing away into God’s heavenly kingdom. Christians will never forget his unfathomable contributions made to India, particularly when our coastal region was greatly devastated by cyclone in 1977. God bless all the Graham family.” —Vijay Ravoori

“The Lord used Billy Graham to lead me to answer the altar call during the Crusade in Hong Kong in the 80s when I was a Chinese high school student. Thank you for being such an important part in my spiritual formation. Now my whole family is saved!” —Lisa Wan

“Billy Graham came to the island of my birth—Trinidad! And my mother listened to him and she understood that Christ took her place. From Hinduism she got saved, and it affected all her seven kids and her siblings. Of her kids, three became preachers including me. She could not read or write but Christ was real to her.” —Vishnu Harbhajan

“Billy Graham’s Crusade in London 1954 transformed our family. His preaching over the years eventually brought me to Jesus Christ and the foot of the cross. I sang in the Crusade choir on his last visit to Scotland, and now my sister and husband have found Christ. Thank you, and keep his work going.” —Marie-Rose Inglis

God knows you and loves you. Do you know Him? 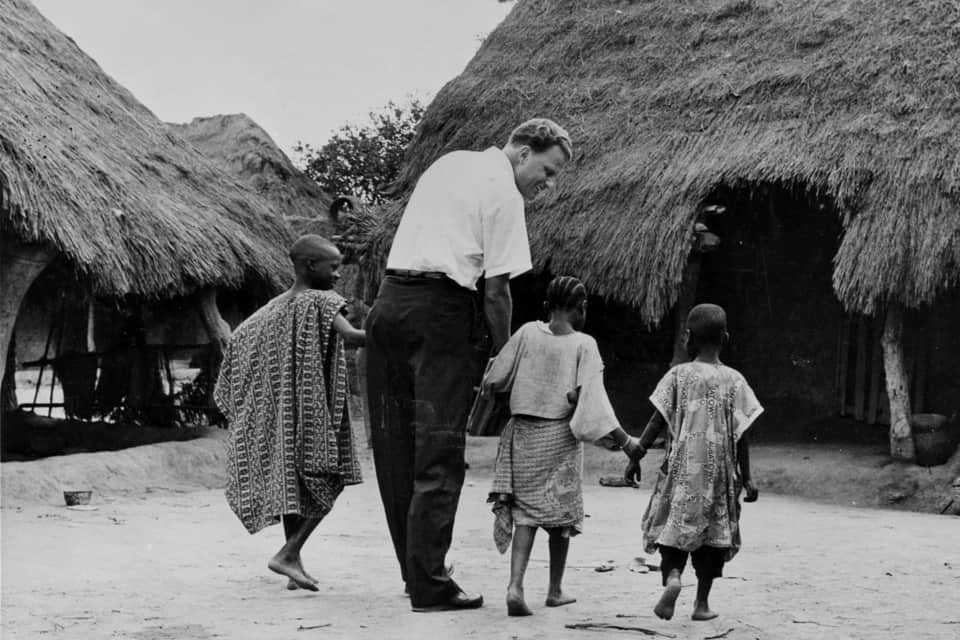