For a record 58th time, Billy Graham has been named as one of the ten most admired men in the world.

Gallup released its annual list on Monday after surveying 805 people throughout the United States and asking, “What [woman/man] that you have heard or read about, living today in any part of the world, do you admire most?”

Sharing a spot with former President George W. Bush, Mr. Graham tied for fourth place on this year’s list of most admired men.

Most Admired Men and Women
This year, President Barack Obama once again took the top spot on the list of most admired men. The sitting president has held the No. 1 position for 58 of the last 68 years. 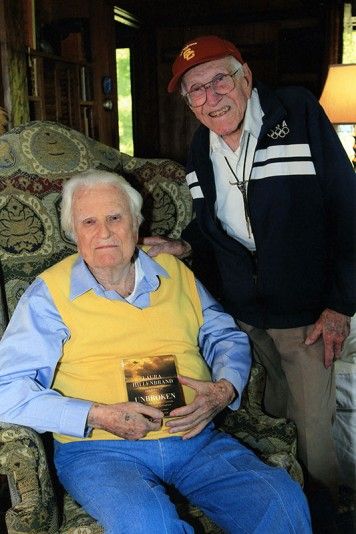 Unbroken Connection
Jolie recently directed the WWII movie Unbroken. Based on the book by Laura Hillenbrand, it portrays the early life of Olympic runner and American bombardier Louis Zamperini. The movie, which opened on Christmas Day, does not depict Zamperini’s life after WWII, when he struggled with depression, alcohol abuse and ongoing nightmares about the war.

In 1949, Zamperini reluctantly attended the historic Billy Graham Crusade in Los Angeles, where he made a decision to accept Christ. Zamperini went on to do extraordinary things in the name of Jesus.

Around Billy Graham’s birthday on Nov. 7, the BGEA also released a video called Heaven. The video has a new message from Mr. Graham, coupled with powerful, true stories from people who have faced the reality of death, and what happens next.

Louis Zamperini (right) traveled across the country
to visit Billy Graham at his Montreat, North
Carolina, home in 2011.