It had nearly every essential fixture of a Billy Graham Crusade—a diverse crowd of thousands; a grand choir of voices; and most importantly, a clear presentation of the Gospel.

There was just one piece missing: Billy Graham.

His beautifully simple wooden casket lay at the front of the great white tent, but the evangelist wasn’t there.

“Today, he’s in Heaven,” his oldest son Franklin Graham said. “On the 21st of February, he was escorted by God’s angels to the throne of God. And I can only imagine what it was like when my father stepped into Heaven, and there was the Lord Jesus Christ to say, ‘Well done, good and faithful servant.’”

The funeral service began at noon beneath a tent reminiscent of the one that made headlines during Mr. Graham’s Los Angeles Crusade in 1949. From that time forward, Billy Graham was a household name. The dairy farmer’s son from Charlotte, North Carolina, became known as “America’s Pastor” and “Pastor to Presidents.”

A few minutes before the funeral service began, the thrum of a helicopter indicated the President’s motorcade was approaching. Shortly after, President Donald Trump, first lady Melania Trump, Vice President Mike Pence and second lady Karen Pence walked shoulder-to-shoulder up the brick walkway from the cross-shaped entry of the Billy Graham Library to the front of the tent.

John Innes, a former Billy Graham Crusade pianist, played hymns as six of Mr. Graham’s grandsons carried his casket up the walkway. His sister, five children, 19 grandchildren and dozens of great-grandchildren and other relatives followed behind.

Gospel singer Linda McCrary-Fisher and three other female vocalists filled the tent with their soulful voices, as several guests let out an occasional, “Hallelujah!” It was an early indication that the service would be solemn but not stuffy. Billy Graham, after all, was known for his humility and his way of putting people at ease.

His longtime executive assistant Dr. David Bruce welcomed the crowd of about 2,000 guests and hundreds of journalists to the service, and Mr. Graham’s pastor Dr. Donald Wilton read from Ephesians Chapter 2: “… For by grace you have been saved through faith. And this is not your own doing; it is the gift of God, not a result of works, so that no one may boast.”

Mr. Graham lived out those words by refusing to boast about his successes, even as he graced magazine covers and sitting rooms of presidents and royals.

The many famous faces in attendance testified that Mr. Graham—though he would hate to say so—was a celebrity. He was an exceedingly rare individual who could seamlessly toggle between the rich and powerful and the poor and downtrodden. A man who became “all things to all people, that by all means [he] might save some” (1 Corinthians 9:22).

But while Billy Graham may have belonged to the whole world, his little sister reminded everyone that he also had a family. He was a husband, a father, a son and a brother.

“You’re here because you love him, but you don’t love him like I do,” Jean Graham Ford said. “And you haven’t loved him as long as I have.”

Next, Mr. Graham’s three daughters and youngest son each spoke about their father.

Virginia “Gigi” Graham testified to the deep love her parents had for one another. She read a poem her late mother Ruth Bell Graham penned as a 13-year-old girl asking God for a future husband with straight shoulders, quiet eyes and a ruggedness of soul. “The Lord answered every single one of those prayers,” Gigi said.

Billy Graham once called his middle daughter, Anne Graham Lotz, the best preacher in the family. Her passionate message on Friday was part-tribute and part-sermon. “I believe from Heaven’s perspective that my father’s death is as significant as his life,” she said. “I believe this is a shot across the bow from Heaven. I believe God is saying, “Wake up, Church! Wake up, world! Wake up, Anne! Jesus is coming.”

From the back of the tent, shouts of “Amen!” and “Go ahead!” erupted as Anne preached, carrying on her father’s legacy as an evangelist.

Ruth Graham, the youngest daughter, stepped up to the pulpit after her sister. Laughter broke out as she acknowledged what everyone was thinking: “I have followed her all my life.”

But Ruth held her own as she shared a powerful story about her father. Giving the thousands of guests—and more than 100,000 watching live online—a glimpse into one of her darkest, most personal struggles, Ruth explained the overwhelming shame she felt when her second marriage dissolved abruptly. Her parents had warned her, and she ignored them. As she drove up the mountain to see them, dreading what they might say, her daddy was standing there waiting for her.

“As I got out of the car, he wrapped his arms around me, and he said, ‘Welcome home.’ There was no shame, there was no blame, no condemnation. Just unconditional love. My father was not God, but he showed me what God was likethat day.”

Billy Graham’s youngest child, Ned Graham, was the most succinct speaker of the day. He said his father was “faithful, available and teachable” and urged everyone to strive to be the same.

Tributes from Around the World

After the family tributes, Grammy and Dove Award winner Michael W. Smith—a longtime fixture at Billy Graham Crusades—sang “Above All” as he played the piano.

The next few minutes temporarily transported guests from Charlotte, N.C., to the other side of the world.

Rev. Billy Kim served as Mr. Graham’s interpreter during the largest Crusade in the history of the Billy Graham Evangelistic Association. On a single night of the event in Seoul, South Korea, in 1973, more than 1.1 million people filled an old airport runway to hear Billy Graham preach the Gospel.

On Friday, Kim took a few minutes to give thanks for a life that he says changed his family and his country.

“Mr. Graham, on behalf of millions of international Christians around the world—those who have heard you proclaim the Gospel message and were touched, challenged and saved—I join all of them to say, ‘thank you.’”

Kim, who served as a pastor for many years and is now the president of Far East Broadcasting Company in Korea, described how his church saw explosive growth after the historic Crusade in Seoul. His 300-member congregation multiplied to become 20,000-strong.

“We have more churches and missionaries than any other country in our region, all because you came to preach the Word to our people,” he said.

Rev. Sami Dagher, a pastor and church planter from Lebanon who has been persecuted for his faith in Christ, described walking into a prayer room in Amsterdam in 1971 and seeing Billy Graham “on his face before God, praying and crying before he went to preach the Gospel.”

Mr Graham, he said, was “dependent completely on God.”

“American people, I thank you in the name of Jesus for standing behind this great man, to fulfill the mission which was given to him by God,” Dagher said. “And I do pray that God will bless America for giving the world such a  great man like Billy Graham. Glory and honor be to our Lord and Savior Jesus Christ.”

After the Grammy-winning Gaither Vocal Band sang “Because He Lives,” Rev. Robert Cunville, a longtime BGEA evangelist from India, offered a powerful prayer. He asked God to pour out His Holy Spirit on those gathered under the tent as Franklin Graham shared the message of Christ.

When Franklin stepped up to the same pulpit Billy Graham stood behind many times during his Crusades in the 1990s, his expression appeared to be one of determination. He was determined, it seemed, to say what his father would have wanted him to say. He was determined to hold one last Crusade.

“Just a few days ago, my father followed Jesus all the way to Heaven. Most of his life was spent traveling the world, but last week he embarked on the journey he had been looking forward to all of his life—the journey from Earth to Heaven.”

Franklin shared the heart of the Gospel—how sin separates us from God, and the penalty of sin is death. How God, out of His great love for the world, sent His Son Jesus Christ to Earth to die in our place. And how we can be with Him forever in Heaven if we repent and follow Christ.

“He shed His blood for each and every one of you,” he said. “Are you saved, are you forgiven, are you trusting Jesus as your Savior? Are you following Him as your Lord?

“If you’re not sure, there’d be no better time than right now at Billy Graham’s funeral. Let’s settle this once and for eternity.”

Then, just as he and his father have done hundreds and thousands of times at Crusade events around the world, Franklin invited everyone listening to pray to receive Christ as their Savior.

This time, the people didn’t stream forward. Only God knows how many were moved by the Holy Spirit to turn from their old ways and find peace with God.

After Franklin’s message, former Crusade choir director Tom Bledsoe led the guests in the classic hymn, “To God Be the Glory.”

Bishop George E. Battle Jr. of the African Methodist Episcopal (A.M.E.) Zion Church in Charlotte gave the benediction before Pipe Major William Boetticher escorted the casket and family out of the tent as “Amazing Grace” rang out.

From start to finish, Billy Graham’s final Crusade lifted up the name of Jesus Christ. And that is the one thing Mr. Graham would have wanted. In fact, he insisted on it.

The heart of Friday’s service may have been summarized best by Robert Cunville, the humble Indian evangelist who helps continue Billy Graham’s global ministry to this day. Cunville thanked God for Billy Graham in a passionate prayer that surely rose above the top of the tent and cut through the cloudless, blue sky.

“We know that it was You, You who brought the countless souls to the foot of the cross,” he prayed. “For this is what your servant would say: ‘Oh, God, not me. Not me, but God did it.’” 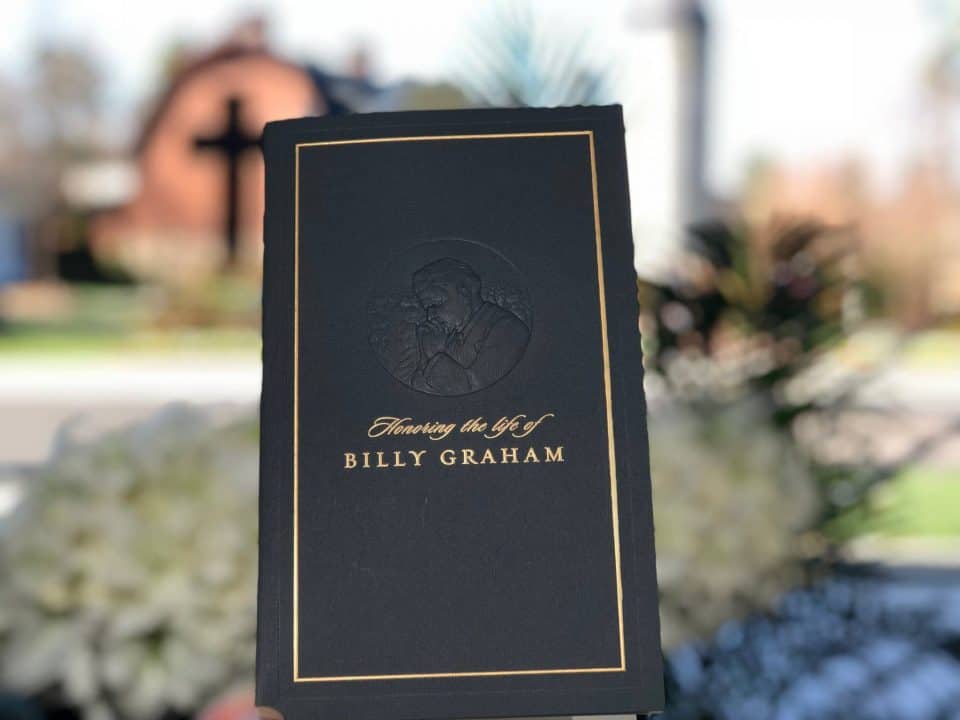 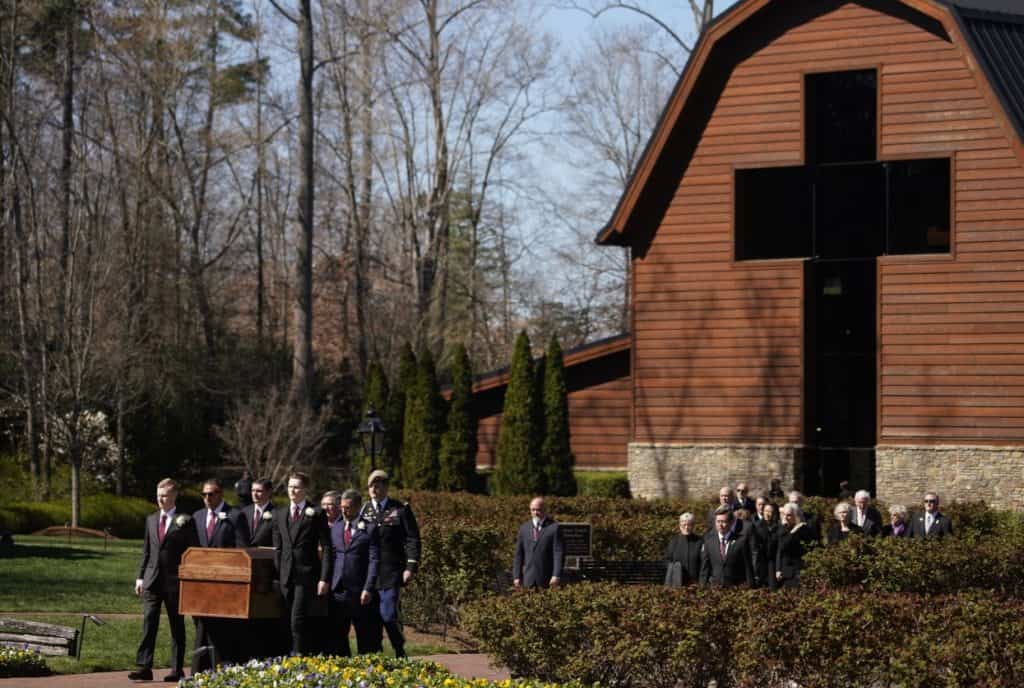