Long before President Lyndon B. Johnson signed the landmark Civil Rights Act of 1964 outlawing discrimination on the basis of race, color, religion, sex or national origin, Billy Graham was a frontlines leader for civil rights.

Mr. Graham had a heart for people of all races and preached the Biblical truth that the Gospel of Jesus Christ is for everyone. Throughout his ministry, he spoke often about racism and injustice, always pointing to the Gospel as the only answer to bring lasting healing and reconciliation.

In the spring of 1953 in Chattanooga, Tennessee, Billy Graham took a clear stand on how his Crusade meetings would be held. Racial segregation was the norm in Southern cities, and ropes were used to segregate black and white audiences. When Mr. Graham arrived at the Crusade site in Chattanooga, he saw that the local committee had roped off the seating into sections that would keep blacks and whites apart.

“Blacks were supposed to sit back of that, and the whites would sit in front,” Mr. Graham recalled in a Billy Graham Evangelistic Association (BGEA) video. “I was appalled at it and decided that I had to speak out on it and had to do something about it. I said, ‘No more of this.’”

After the head usher told him he wouldn’t remove the ropes, Mr. Graham took matters into his own hands by personally walking from the pulpit to tear down the ropes.

“That was a historic moment in history with the church, and that opened up his friendship with Martin Luther King and other people, and he really practiced what he preached,” said the late Cliff Barrows, then music and program director for BGEA.

Mr. Graham’s first public act against racial segregation was a milestone in his ministry.

Though physical ropes no longer separate us racially, numerous barriers remain. However, the heart of BGEA hasn’t changed from that Chattanooga Crusade nearly 68 years ago. As racial tensions rise, and unrest and hatred are perpetuated, BGEA is committed to continuing Mr. Graham’s legacy of preaching the Gospel message and presenting the truth that Christ is for all.

Two living examples of this truth are Will Ford and Matt Lockett, who, much like Billy Graham in 1953, have torn down barriers of separation and committed themselves to helping heal racial divisions in America.

Will and Matt never expected to become friends, but, as they now attest, God had been working behind the scenes for generations to shape a modern-day friendship.

Will, a descendant of slaves, and Matt, whose ancestors were farmers, met in 2005 after both men had dreams in which they believed God was leading them to attend a prayer event in the nation’s capital. Both obeyed God’s prompting and went to Washington, D.C. 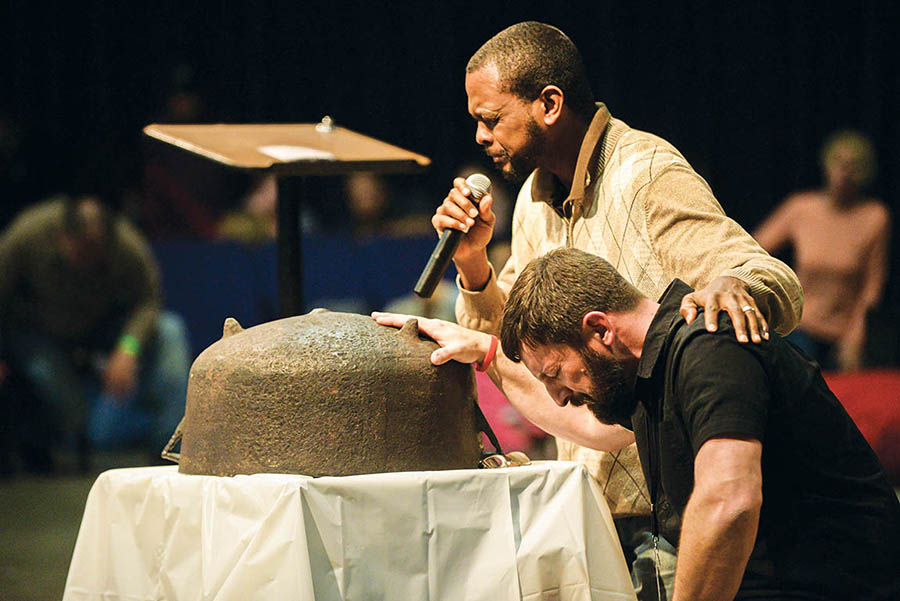 Will Ford (standing) and Matt Lockett pray together in front of the prayer kettle.

Photo: Courtesy of Will Ford and Matt Lockett

The prayer event ended at the Lincoln Memorial, the same location where Martin Luther King Jr. gave his “I Have A Dream” speech in 1963—calling for civil and economic rights and an end to racism in the United States—and coined the famous words: “The sons of former slaves and the sons of former slave owners will be able to sit down together at the table of brotherhood.”

Afterward, both men attended the same church service, and Will shared with the congregation about his ancestors’ prayer kettle—a large pot used by his enslaved family members to muffle their voices during secret prayer meetings held late at night in the barn on the farm while the slave owners were sleeping.

When the service was over, Will and Matt connected, and a friendship was born.

A decade into their relationship, Matt discovered something that would radically alter their common burden for racial healing.

He had never forgotten a conversation he and Will had the first day they met. Will’s great-great-grandmother, Harriet Locket—to whom the prayer kettle had been handed down decades earlier—shared Matt’s last name. Only Harriet Locket spelled hers with one “t.”

Matt also remembered that Will’s family was from Louisiana, while his was from Kentucky.

Having always been interested in his genealogy, Matt started digging into his family history. He discovered that Confederate Gen. Robert E. Lee’s last battle in the American Civil War was known as The Battle of Lockett’s Farm. After more digging, he discovered the farmhouse was owned by ancestors of his.

He also learned that Lockett family members had branched out from the original homestead in Virginia. Some had gone to Kentucky, where his family was from, while others had gone to various places in the South, like Louisiana. For some who ventured away, the spelling of the last name changed slightly because of clerical errors in census notes. And quite often, freed slaves took their slave owner’s last name out of convenience in order to gain citizenship as they ventured away, often many miles from their former slave homes.

Matt continued researching for more than a year, and the evidence became clear—his family, the Locketts, had owned Will’s family, the Fords.

The two men recall in their book, “The Dream King,” how God helped walk them through the discovery of their lineage.

“Will and I have bound ourselves together as brothers for years, contending for revival in the land, racial healing, and the ending of the ongoing injustice in America,” Matt wrote. “We now realize that God had a much bigger plan in mind, and it was a plan that began long ago.”

“You can only imagine my reaction to all of this as it unfolded,” Will wrote. “I was overwhelmed that God answered my prayers of knowing who had owned those ‘kettle prayer warriors’ and how our history was connected. To know that I shared this kind of history with one of my best friends left me beside myself. Our families have wept together, reflecting on the redemptive power of God’s providential hand.”

Will and Matt could’ve easily walked in the grievances of their ancestors, but the two men have allowed this discovery to strengthen their bond. They now travel the country sharing their story and uniting in prayer—with the same posture as Will’s ancestors—that many would know the One who intricately wove hundreds of years of injustice together into a beautiful story.

Christ Is for All

“Racism has caused deep wounds in our nation,” said Franklin Graham, president of the Billy Graham Evangelistic Association. “But regret is not enough. We must make corrections, we must improve, we must act to bring positive change.

“The Bible is very clear that all people are created in God’s image (see Genesis 1:27). No skin color is more or less important to Him. The Bible teaches us to love others as we would love ourselves.”

True racial unity can only be achieved through Jesus Christ. Because of Him, the thick veil that separated us from God was torn in two. And He also tore down the “ropes” that separate us from one another. “For Christ himself has brought peace to us. He united Jews and Gentiles into one people when, in his own body on the cross, he broke down the wall of hostility that separated us” (Ephesians 2:14).

The Scripture quotation is taken from the Holy Bible, New Living Translation.

Above: Thanks to Billy Graham’s insistence, Crusade audiences were integrated, such as at his 1965 Crusade in Montgomery, Alabama.