What will it take to fulfill the Great Commission?

That question has burned in Mark Anderson’s heart ever since his first encounter with Jesus Christ at a Billy Graham Crusade 45 years ago.

On a hot July evening in 1973, a friend invited Anderson to an event at the Minnesota State Fairgrounds in St. Paul, Minn. When they arrived, Anderson discovered that it was a Billy Graham Crusade. As he listened to Mr. Graham’s message, he was struck by the thought that Billy Graham sounded as if he really knew Jesus. Anderson remembered that his great-grandfather had been a Methodist circuit rider and church planter, but that heritage had not continued through the succeeding generations.

The Great Commission
Now the eleven disciples went to Galilee, to the mountain to which Jesus had directed them. And when they saw him they worshiped him, but some doubted. And Jesus came and said to them, “All authority in heaven and on earth has been given to me. Go therefore and make disciples of all nations, baptizing them in the name of the Father and of the Son and of the Holy Spirit, teaching them to observe all that I have commanded you. And behold, I am with you always, to the end of the age.” —Matthew 28:16-20

At the invitation, Anderson felt a pull to join those going forward, but he hesitated. Then Mr. Graham said, “This is the final call. If you are coming to give your heart to Jesus tonight, you must step out right now and make your way down front.” And almost before Anderson realized it, he had joined the flood of people streaming down the aisles. That night, his life was changed forever.

Immediately, he felt a deep passion for the lost. He told everyone he met about Jesus and how his life had been changed. That first year, he led 32 family members to the Lord. He and his soon-to-be wife, Karen, started by making lists of all the people they knew.

“We prayed over them every day by name,” Anderson says. “We asked the Lord to grant us opportunities and strategies, and to open up their hearts, which He did.”

One of the most meaningful conversions came when Anderson’s father, who had struggled with alcohol for some time, committed his life to Jesus Christ. Now, all these years later, Anderson reports that all six of his and Karen’s children are serving the Lord. Of their 16 grandchildren, all the ones who are old enough to understand are also following the Lord. There are multiple missionaries in the family. “We don’t have anyone in our extended family in three generations who isn’t serving the Lord,” Anderson says.

During those early days, Anderson also routinely picked up hitchhikers and led many to the Lord. The young couple’s apartment soon filled with people they were discipling. “They were sleeping on the floor and on the couch,” Anderson recalls. “One time we had so many who came to Christ, we had to have somebody sleep in the tub.”

Why such passion for telling people the Good News of Christ?

“We understood that Christianity is defined by obeying the Word of God,” Anderson says. “The idea that one could actually be a Christian but not obey the Great Commission was unthinkable. We would never count ourselves Christians if we didn’t share our faith with people.”

God also impressed upon Anderson’s heart the importance of strategy: What is the best way to reach an individual, an unreached people group, or the entire world? Anderson has been working on answers to those questions ever since.

In 1992, he joined Youth With A Mission (YWAM), and the following year he launched citywide, crusade-style campaigns called Impact World. In the years since, people in more than 50 countries have come to Christ through those campaigns, with teams operating from the United States, South America, Southeast Asia, Europe and the Caribbean.

During the historic, BGEA-sponsored Amsterdam 2000 conference for preaching evangelists, Anderson was among roughly 600 evangelism strategists who met daily to address the question: What will it take to fulfill the Great Commission?

In one of the sessions, the strategists reviewed a list of “unengaged people groups,” meaning groups that had no Scripture and no Christian witness of any kind. The strategists, many of whom represented missions and evangelistic ministries, began to “adopt” groups, committing to bring the Gospel to them. But the effort seemed to stall with a number of people groups still not spoken for.

“The idea that one could actually be a Christian but not obey the Great Commission was unthinkable. We would never count ourselves Christians if we didn’t share our faith with people.”

Then Steve Douglass of Campus Crusade turned to Anderson, who was representing YWAM, and suggested that the two adopt the entire list of remaining groups. Anderson agreed, and as the day went on, other leaders committed to taking on various aspects of reaching those groups, such as Bible translation and church planting. A coalition of eight organizations formed that week.

“That was 53 meetings ago,” Anderson says. “We’ve been meeting three times a year since 2000. And from that group—which has now grown to more than 50 different leaders and organizations—all sorts of initiatives have come out for global evangelization, Bible translation, Bible engagement, discipleship movements and so on.”

In 2008, in an effort to strategically focus on fulfilling the Great Commission, Anderson started another initiative, Call2All. The ministry holds congresses around the world in which participants work together on how to reach five “finish lines” of the Great Commission:

“I think we’re at a moment that, if we can present the Gospel wisely and accurately, there’s a whole generation across the globe waiting to take hold of it,” he says. “They want Jesus unlike any generation I’ve ever seen. I am very burdened for the church in the Western world, which is losing people. But overall, a lot of progress is being made. The Kingdom is growing.”  ©2018 BGEA

Author and speaker Joyce Williams, who assisted Decision during Amsterdam 2000, contributed to this report.

You can have the hope of Christ in your life. Start here. 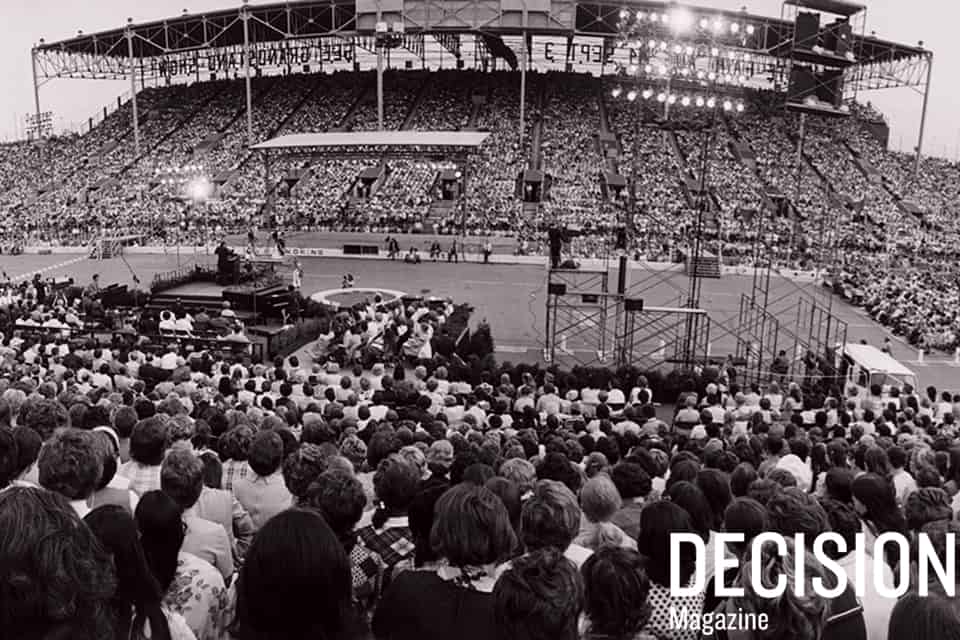