“God has done everything possible to provide salvation. But we must reach out in faith and accept it.” —Billy Graham

Have you accepted Christ? Whether you have or haven’t, or are confused by what it means—it’s worth your time to read this true account. This is the story of how Billy Graham—a man used by God to reach millions of people for Jesus Christ—was himself born again. Quotes are taken from his autobiography, Just As I Am.

Billy Graham grew up during the Great Depression on a dairy farm near Charlotte, North Carolina. As a teenager, he grudgingly attended church with his family, and found his family’s Bible-reading, praying and psalm-singing left him feeling restless and resentful.

In May of 1934, Christian businessmen in Charlotte, North Carolina, held an all-day prayer meeting on his father’s pasture. Billy Graham’s father, William Franklin Graham, Sr., recalled one of the men’s prayer that day: “That out of Charlotte the Lord would raise up someone to preach the Gospel to the ends of the earth.”

“At that time, in 1934, it certainly wasn’t obvious that that someone might be me,” Billy Graham wrote.

Thousands flocked to hear Dr. Ham preach inside a “tabernacle,” actually a sprawling, ramshackle building with a sawdust groundcover, built especially for the occasion. 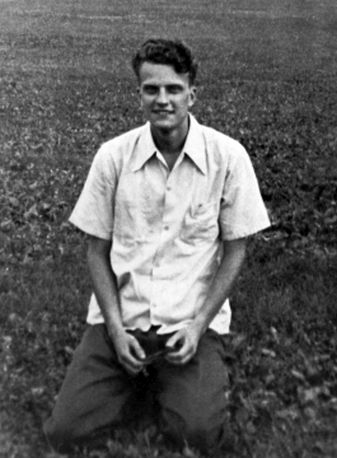 Billy Graham in his younger years.

“Everything I heard or read about him made me feel antagonistic toward the whole affair,” Billy Graham shared in his autobiography. “It sounded like a religious circus to me.”

Billy Graham’s parents attended the meeting, but their enthusiasm didn’t rub off on their typical teenage son, who was about to turn 16.

“I did not want anything to do with an evangelist—particularly with such a colorful character as Dr. Ham,” Billy Graham said. “I told my parents that I would not go to hear him.”

A while later, his interest in the revival peaked after reading an article in which Dr. Ham claimed local high schoolers were participating in immoral activity during school hours.

“Apparently, the evangelist knew what he was talking about,” Billy Graham wrote. “He claimed to have affidavits from certain students that a house across the street from the school, supposedly offering the boys and girls lunch during noon recess, actually gave them some additional pleasures.”

Rumors flew that angry students planned to march on the tabernacle and demonstrate right in front of the platform. And that maybe they would even injure Dr. Ham. Just As I Am recounts the moment:

“That stirred up my curiosity,” Billy Graham recalled, “and I wanted to go just to see what would happen. But how could I save face after holding out for nearly a month?”

“Why don’t you come out and hear our fighting preacher?” a friend suggested.

“Is he a fighter?” I asked. That put a little different slant on things. I like a fighter.”

His friend offered another incentive—letting Billy Graham drive his old vegetable truck into town for the meeting. Billy Graham drove the truck, “loaded with as many folks, white and black, as [his friend] could get to go along.”

Dr. Ham began preaching, loudly, Billy Graham recalled. Recounting the night many years later, he said, “I have no recollection of what he preached about, but I was spellbound. In some indefinable way, he was getting through to me. I was hearing another voice … the voice of the Holy Spirit.” 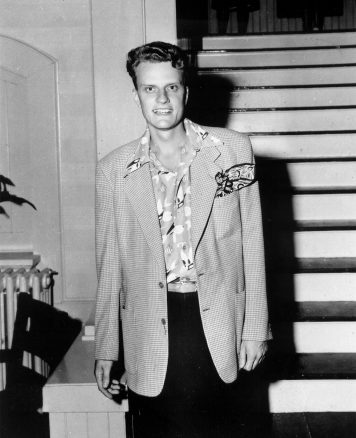 Regarding the night he accepted Christ, Billy Graham wrote, “For the first time in my life I got down on my knees without being told to do so. I really wanted to talk to God. ‘Lord, I don’t know what happened to me tonight,’ I prayed. ‘You know. And I thank You for the privilege I’ve had tonight.’”

Billy Graham returned the very next night. “All my father’s mules and horses could not have kept me from getting to that meeting,” he said, and continued night and night for weeks.

Dr. Ham preached on lively topics, such as the Second Coming of Christ, sin, money, Hell, among others.

“I had never heard a sermon on Hell,” said Billy Graham, who noted the evangelist also talked about the great love of God.

The farmer’s son heart became heavy, wondering, “Why would the evangelist always be pointing his bony finger at me?

“I became deeply convicted about my sinfulness and rebellion. And confused,” he said, recounting his church upbringing and good deeds.

“Grady and I had both decided on a strategy to avoid the frontal attack by Dr. Ham,” he said. They joined the choir and sat behind the evangelist. “Neither of us could sing, but we could move our mouths or hold a hymn book in front of our faces for camouflage.”

But God commendeth his love toward us, in that, while we were yet sinners, Christ died for us
–Romans 5:8, KJV

What was really happening during that time, Billy Graham recalled, was “the miserable realization that I did not know Jesus Christ for myself.”

A few weeks into the meetings—just a few days shy of his 16thbirthday on Nov. 7—Billy Graham remembers hearing Dr. Ham quote Romans 5:8. This verse, about how much God loves us, remained with Billy Graham. During his own Crusades, televised sermons, radio messages and in person, Billy Graham regularly told millions, “God loves you.”

After Dr. Ham finished his message, he invited the tabernacle full of people to accept Christ.

“I walked down to the front, feeling as if I had lead weights attached to my feet.”

Looking around, he saw a woman next to him with tears running down her cheeks. “I did not feel any special emotion of any kind just then,” he said, and wondered if he was making a fool of himself. “I almost turned around and went back to my seat.”

It was then that a family friend came beside Billy Graham, explained God’s plan for salvation in a simple way, prayed for Billy Graham and guided him to pray to receive Christ. 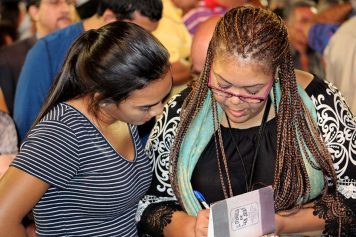 A counselor comes alongside a young woman who responded to the invitation to receive Christ at the 2017 Festival de Esperanza (Festival of Hope) with Franklin Graham in Puerto Rico.

Having someone beside him, walking him through this decision was pivotal for young Billy Graham, and this became a crucial component of the future Crusades he would hold with the Billy Graham Evangelistic Association.

Billy Graham and his team had trained counselors at the events available for people who made decisions for Christ. When he gave an invitation and people came forward, hundreds of counselors would stand beside them to offer support and prayer.

“A counselor’s job is to give spiritual counsel, to lead someone to Christ or help them if they’ve strayed from Christ. Counselors might also lead someone to rededicate his or her faith, or tell inquirers how they can be assured of their salvation.”

Billy Graham was thankful that someone assured him in his salvation decision and described what he felt after giving his life to Christ: “No bells went off inside me. No signs flashed across the tabernacle ceiling. … I simply felt at peace. … happy and peaceful.”

Billy Graham went on to preach the Gospel to more people in live audiences than anyone else in history—nearly 215 million people in more than 185 countries and territories—through various meetings, including Mission World and Global Mission. Hundreds of millions more have been reached through television, video, film, and webcasts.

At nearly 99 years old, Billy Graham continues his ministry through prayer in his western North Carolina home. “Why do we need to pray?” Billy Graham once asked. “Because the Christian life is a journey and we need God’s strength and guidance along the way.”

Are you going to Heaven? Know for sure. 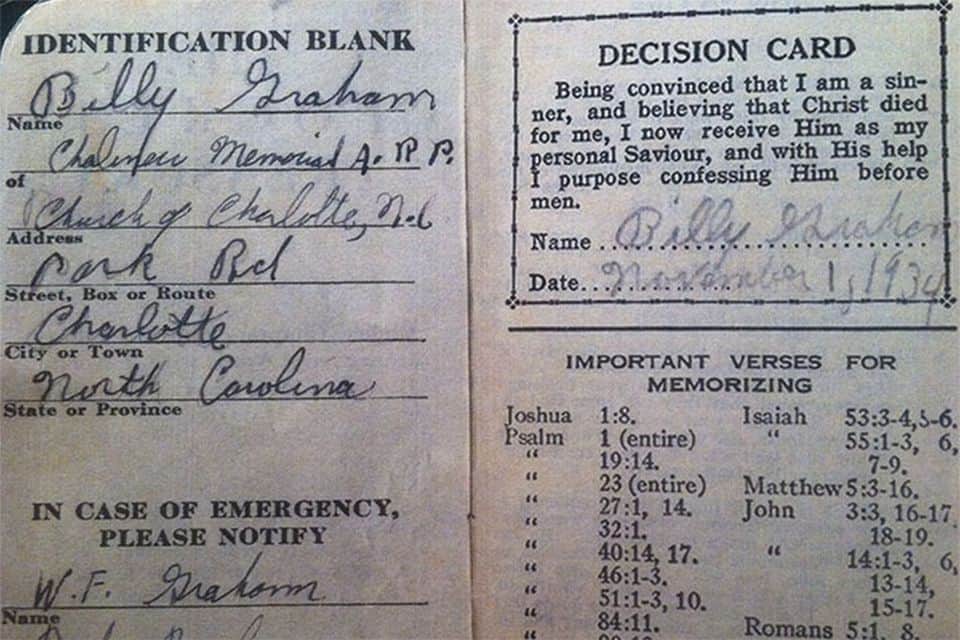