“This is not my typical Friday.”

Maria has lived in Kalgoorlie, Western Australia, for about six years, though originally from Africa. Like many others, she moved to the area to work in the gold mines that keep the town’s economy afloat.

But she’s got a feeling she won’t be in the mines much longer.

Maria was leaving a work gathering Friday evening when she says she “all of a sudden” felt a nudge to go a different way home.

“This is not the normal route I would take. I live on the other side of town,” she smiled, still amazed at how her night took a turn.

Driving by Centennial Park, Maria saw banners for the Goldfields Celebration with Will Graham and remembered an event her friend mentioned weeks earlier.

“I thought, ‘Oh, that’s happening tonight,’” she recalled, eventually deciding to see if her friend was there. She was.

And so it began.

Friday marked the first event of the three-day Will Graham Celebration in Kalgoorlie. There were games and prizes. SkyPilot and The Afters performed. But it was Will’s message that really got Maria’s attention.

“What were you created for?”

“It’s a question I’ve been asking since the beginning of this year,” Maria said.

She grew up in church but left, thinking she could run her own life.

Then recently, a friend her age died in a car accident.

“You can’t just be here and not be here.”

As Will added a visual example to his message, Maria was captivated even more. It was as if the entire night was just for her—and it started to click.

Watch a clip of Will Graham’s message on purpose below.

“The purpose of the pen is to write with,” Will said with a pen and notebook in his hand.

But the pen can’t write on its own. “It can only fulfill its purpose in life when it’s in its master’s hands,” he explained.

Even though Maria was one of the last to walk forward, it’s a decision that counted.

“It took a lot of courage,” she said. “But it was really important to walk forward and make that commitment … as opposed to just standing there.

“By taking a step, you’re already on a path to doing something different.”

A prayer volunteer named Katie sat next to Maria and gleamed as she talked.

“You better preach it sister!” she laughed.

It turns out Maria and Katie also know each other. Katie is a chaplain at her church and decided to volunteer at the Celebration to pray with those who walked forward to make a decision for Christ.

The pair hadn’t seen each other in a while after Maria stopped coming to church. Little did she know, they’d reconnect at the Celebration—all in God’s timing.

Now, Katie is planning to help Maria however she can after her decision to come back to Christ.

“God has a purpose for me. And I definitely want to make my time on earth count,” Maria said.

“A lot of times, I feel like I can do it on my own. But, we are the pen. And so, we have to be in the hands of our Maker in order to fulfill our purpose.”

Please pray for the remaining Goldfields Celebration events, which will stream live online at celcebrationofhope.org.au. 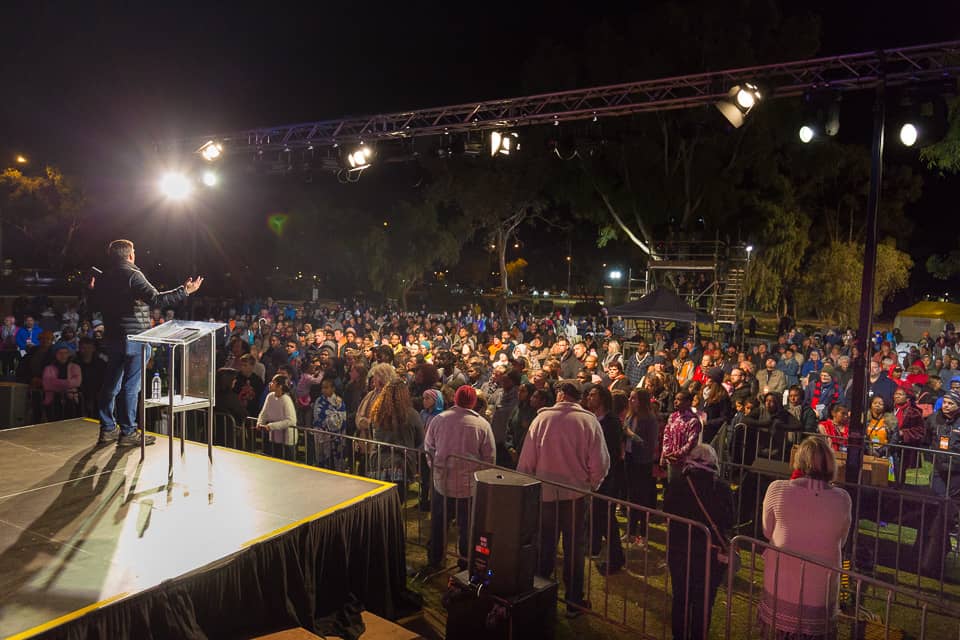