Deadly hurricanes and devastating earthquakes have dominated the news for nearly a month.

Hurricanes Harvey, Irma and Maria have pummeled the Caribbean and the southeast U.S., while two major earthquakes in Mexico have left hundreds dead and thousands suffering.

Many are wondering when this brutal cycle of natural disasters will end. It’s an understatement to say there’s a lot of fear and uncertainty—both for those directly involved and others with family and friends in the thick of it. 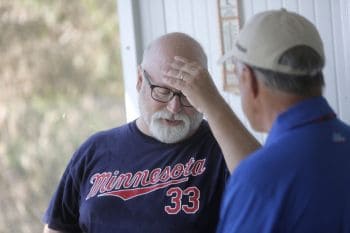 As Hurricane Maria battered Puerto Rico, Franklin Graham appealed for prayer once more on his Facebook page: “It seems like over the last few weeks I keep asking you to join me in praying, again and again, for victims of storms and disasters. The Bible tells us that we should ‘continue steadfastly in prayer.’ We must not grow weary, but continue to take the needs of others to our Father in Heaven.”

In Jacksonville, Florida, Billy Graham chaplains found many residents were lugging around a lot of hurt even before the storm hit.

“Everybody would talk about Irma for maybe 10 minutes and then spent two hours talking about the trauma they were living before the hurricane hit,” said RRT chaplain Anika Magwood.

This tends to happen in every place the RRT chaplains minister.

“Many of those affected, perhaps up to 80 percent, were already facing some sort of personal crisis in their lives before this deadly hurricane leveled the latest blow,” said Jack Munday, international director of the Billy Graham Rapid Response Team.

Anika Magwood has seen it up close in Jacksonville.

“We’ve seen that in every person we’ve ministered to,” she said. “The Holy Spirit has been riding ahead of us. These people break down and sob, and then the whole story from before the storm comes out. It’s something they have not dealt with, and it’s what we’re dealing with.”

The Holy Spirit has been riding ahead of us. These people break down and sob, and then the whole story from before the storm comes out.
—Anika Magwood, RRT chaplain

One man staying in a local shelter had been searching for the Lord his whole life. Growing up without parents—living in orphanages, group homes and eventually on the street—he dabbled in different religions looking for God.

“He would say things like, ‘I’m trying so hard to find you, God, and I get nothing back from you,’” John said. “He was really struggling to have a relationship with a God that he can’t see.”

They prayed together over the next few days, and John shared the Gospel. Though the man wasn’t ready to commit his life to Christ, he finally heard about the only way to God.

Other storm survivors are asking chaplains, “Why did this happen to me?” or, “Why have we lost everything?”

“People who are at that place of realizing that they don’t have all the answers or control usually welcome the opportunity to speak and pray with a chaplain,” Munday said. “It reminds them that there is a God who loves them, who cares for them, and who wants to walk through the storms of life with them.”

Letting people know they’re not alone touches hearts, whether through a chaplain or prayer from individuals—something Franklin Graham asked for in his Facebook post: “Let’s pray for our neighbors who are suffering, that God would put His loving arms around them and bring the comfort that only He can give.”

Please continue to lift up those affected by the recent earthquakes and hurricanes.