In the wake of deadly terrorist attacks on March 22 in Brussels, Belgium, crisis-trained chaplains with the Billy Graham Rapid Response Team have deployed to the area to offer emotional and spiritual care.

Read a volunteer chaplain’s account of her time in Brussels

In the aftermath of the terrorist attacks on March 22 in Belgium, the Billy Graham Rapid Response Team sent chaplains to provide emotional and spiritual care to those affected by the tragedies.

“Our prayers go out to the people of Brussels and when we arrive, we want to provide Christ’s compassion, care and love to everyone we meet and minister with,” said Merle Doherty, manager of the Billy Graham Evangelistic Association of Canada’s RRT chaplains. 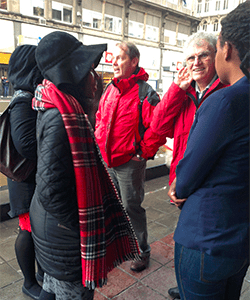 Two chaplains talk to people on a street in Brussels.

The goal is to share the hope of Jesus with an area that experienced utter tragedy on March 22 when terrorists detonated bombs in the Brussels international airport and nearby metro station. At least 30 people were killed and hundreds more were wounded.

This will be the second Rapid Response Team European deployment in less than six months. After terrorist attacks killed more than 130 people in Paris last November, a Canadian-led team of seven chaplains spent two weeks working with local churches to provide compassionate support to grieving Parisians.

“Our prayers go out to the people of Brussels and when we arrive, we want to provide Christ’s compassion, care and love to everyone we meet and minister with.”

“We are grateful for the partnership of our donors in Canada for the Rapid Response Team chaplain ministry,” said BGEA of Canada executive director Fred Weiss.

“That partnership has enabled our chaplains to provide emotional and spiritual aid to hurting people in Canada, the U.S. and overseas in times of crises and tragedy. In each situation, the chaplains offer the compassion and hope of Christ.”

Please pray for our chaplains, that God would work through them to show grieving Brussels residents the love and compassion of Christ, who is “a man of sorrows, and familiar with suffering” (Isaiah 53:3). 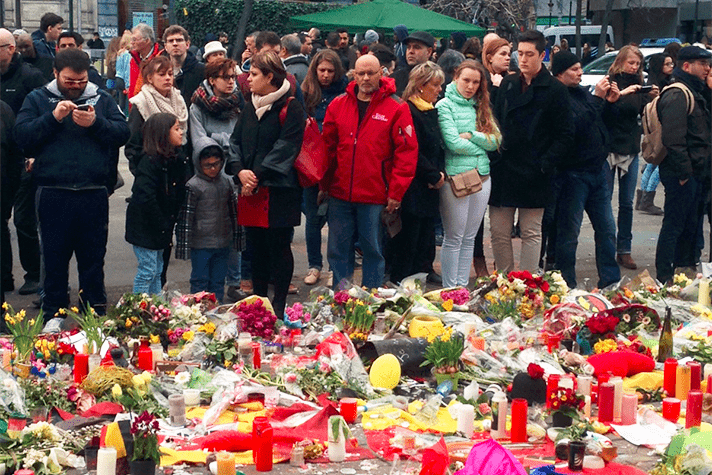 A Billy Graham Rapid Response Team chaplain (center) stands with people who came to pay their respects at a memorial in Brussels, Belgium.